Inter Milan will be aiming to consolidate their place atop the Serie A table when they take on Torino at Stadio Olimpico Grande Torino on Sunday.

Matchday 27 of the 2020/21 Serie A season is underway and on Sunday, five matches will be on show, with each of the top three teams in action. League leaders Inter Milan will take the field early in the day, when they are hosted at Stadio Olimpico Grande Torino by Torino.

Torino have endured a difficult 2020/21 campaign that has seen them being embroiled in the relegation scrap all throughout. The Granata have managed to win just three of their 24 games till date and it is hardly a surprise that they are currently in the drop zone. Having said that, Davide Nicola & co. are just two points behind 17th-placed Cagliari while having a couple of games in hand as well.

Inter Milan, on the other hand, have steamrolled past neighbours AC Milan since the turn of the year, having been closely following the Rossoneri for much of the first half of the campaign. After the opening 26 round of fixtures, the Nerazzurri are comfortably ahead at the top of the table, with Milan six points adrift. That has, of course, been enabled by a fabulous run of form that has seen them win seven Serie A games in a row.

The reverse fixture, played at San Siro back in November, saw Inter Milan come from two goals down to beat Torino 4-2, with Alexis Sanchez, Romelu Lukaku and Lautaro Martinez on target. Ahead of the latest meeting between the two sides, The Hard Tackle takes a closer look at the encounter.

Set to miss out again. (Photo by Valerio Pennicino/Getty Images)

Davide Nicola has greeted a mixed bag of updates on the team news front ahead of the visit of Inter Milan. On Sunday, the Torino manager will be bereft of the services of three first-team players, with three other members of his squad set to be available soon.

Tomas Rincon is set to serve a one-match ban due to an accumulation of yellow cards, while Wilfried Singo and Nicolas N’Koulou miss out due to their contraction of COVID-19. The good news, though, comes in the form of the negative tests that the likes Bremer, Karol Linetty and Andrea Belotti have returned.

None of the three aforementioned stars, though, is expected to be reinstated into the starting lineup straightaway, considering a lack of match practice and fitness. That means in Bremer’s absence, Ricardo Rodriguez is likely to continue filling in the back-three, with Izzo and Lyanco being his central defensive partners. In goal, Salvatore Sirigu is a certainty.

Mergim Vojvoda and Cristian Ansaldi will likely be the two wing-backs, with the duo being tasked with providing width higher up the pitch while also dropping back to form a five-man defensive unit during transitions. In the middle of the park, Rolando Mandragora will have the responsibility of keeping things tight in the middle of the park.

The 23-year-old will receive defensive support from Daniele Baselli and Sasa Lukic in the middle of the park, with the duo also being charged with providing the creative impetus through the centre. Simone Zaza and Antonio Sanabria will form the strike partnership and will have a lot riding on them in the absence of captain Belotti. 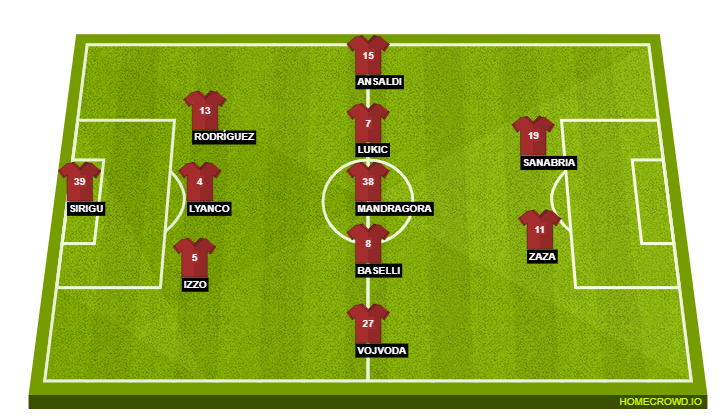 Like his opposite number in the Torino dugout, Antonio Conte has a fresh issue hampering his preparations ahead of the trip to the Stadio Olimpico Grande Torino. On Sunday, the Inter Milan manager could have to make do without three first-team players.

Having said that, Christian Eriksen could be at Conte’s disposal, although his availability has been deemed as touch and go. If the Dane is unable to be fit enough to start, Roberto Gagliardini will become a certain starter in midfield, with Nicolo Barella and Marcelo Brozovic being the key men in the middle of the park for Inter.

The other two absentees for Inter are Aleksandar Kolarov and Arturo Vidal. Meanwhile, captain Samir Handanovic picks himself between the sticks for Inter Milan, who will line up in Conte’s usual 3-5-2 formation against Torino.

The three-man central defensive unit will feature Milan Skriniar, Stefan de Vrij and Alessandro Bastoni, especially considering the Nerazzurri have been getting ample rest between games. As for the wing-backs, Ivan Perisic and Achraf Hakimi, linked with Arsenal and Chelsea lately, are likely to be the stationed out wide.

Finally, there is no looking past Romelu Lukaku and Lautaro Martinez in the Inter Milan strike partnership, with Alexis Sanchez being an option off the bench. Lukaku will be the focal point of the attack, with Martinez having more freedom to roam higher up the pitch to get into pockets of spaces. 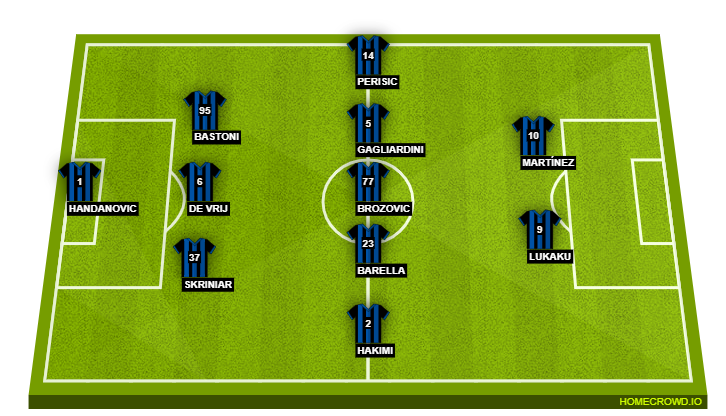 Romelu Lukaku and Lautaro Martinez invariably have the spotlight on them whenever Inter Milan take the field. However, for the attacking duo to flourish, they need someone like Nicolo Barella to create the openings from midfield and the Italian international will once again hold the key for Inter Milan.

The 24-year-old has enjoyed a fine campaign till date and as the season gets set to enter its most decisive phase, players like Barella cannot afford to slip up. Against a vulnerable Torino side, he could extend his fine run of form, thereby inspiring Inter Milan to a comfortable victory.

This has an Inter Milan win written all over it. There is no team more in form in Italy than Antonio Conte’s men, who should really make this a walk in the park, with Nicolo Barella and Romelu Lukaku set to be the shining lights. The Hard Tackle predicts a straightforward 3-0 win for the visitors.