Barcelona will be hoping to overturn a massive first leg deficit when they face PSG at Parc des Princes in the UEFA Champions League Round of 16 on Wednesday.

The UEFA Champions League Round of 16 ties continue this Wednesday, with two more second leg fixtures set to be played on the day. The marquee fixture of the stage will be play at Parc des Princes, where PSG will play hosts to Barcelona, with a place in the quarter-finals on the line.

PSG endured a roller-coaster of a group stage campaign after losing two of their first three games. Les Parisiens, though, won their subsequent three games to nail down top spot in Group H. Mauricio Pochettino & co. have been in fine touch lately, having won eight of their last nine games across all competitions, including the first leg.

Barcelona, on the other hand, had been in command of Group G for the first five matchdays before defeat to Juventus relegated them to the runners-up spot. Ronald Koeman’s charges have shown a definitive upturn in form in recent weeks, having won each of their last four games to nil, including the incredible comeback against Sevilla in the Copa del Rey semi-finals.

Neymar misses out for PSG. (Photo by Franck Fife/AFP via Getty Images)

Mauricio Pochettino has a number of pressing roster issues hampering his preparations ahead of the visit of Barcelona. On Wednesday, the PSG manager will likely have to make do without as many as four first-team players.

The major absentee is Neymar, with the former Barcelona superstar recovering from an injury. In addition to Neymar, the likes of Thilo Kehrer (hip), Moise Kean (coronavirus) and Juan Bernat (knee), who was recently linked with a possible move to Barcelona, are also unavailable.

In Bernat’s absence, Layvin Kurzawa is a certainty as the left-back, with Alessandro Florenzi expected to feature on the right flank. At the heart of the PSG defence, Marquinhos ought to pair up with Presnel Kimpembe, with Keylor Navas an automatic pick in goal.

Up ahead in midfield, Leandro Paredes and Idrissa Gueye will combine in what will be a solid double pivot, with the duo aiming to keep things simple on the ball. Meanwhile, in attack, Marco Verratti will reprise the no. 10 role, with Angel Di Maria and Kylian Mbappe the two wide men and Mauro Icardi being the central striker for PSG against Barcelona. 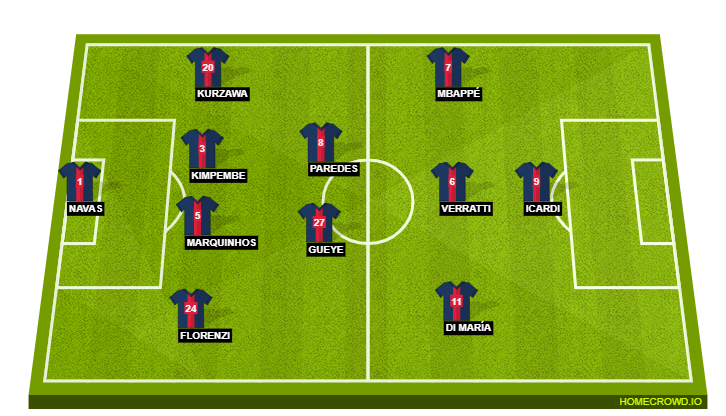 Like his counterpart in the PSG dugout, Ronald Koeman has plenty of injury concerns to contend with ahead of the trip to the Parc des Princes. On Wednesday, the Barcelona manager will be bereft of the services of as many as five first-team players, who have been excluded from the travelling squad.

The key absentee for Barcelona is Gerard Pique, who misses out due to a knee injury, with Ronald Araujo also unavailable due to a knee injury. The remaining players who are sidelined as Sergi Roberto (hamstring), Philippe Coutinho (knee) and Ansu Fati (knee).

The shift to the 3-5-2 formation has worked wonders in recent weeks for Barcelona and Koeman should persist with the system against PSG as well, with Marc-Andre ter Stegen taking his place in goal. The three-man central defensive unit picks itself, with Oscar Mingueza, Clement Lenglet and Samuel Umtiti being certainties at the back.

Sergino Dest and Jordi Alba are perfectly suited to the roles out wide in the new formation and the duo are automatic picks as the wing-back pairing. As for the midfielders, Sergio Busquets will play the Anchor Man role in the middle of the park, with Frenkie de Jong and Pedri being the creative midfielders.

Finally, the strike partnership should comprise of Lionel Messi and Ousmane Dembele, with Antoine Griezmann only being a backup option that will likely be utilised later in the game. 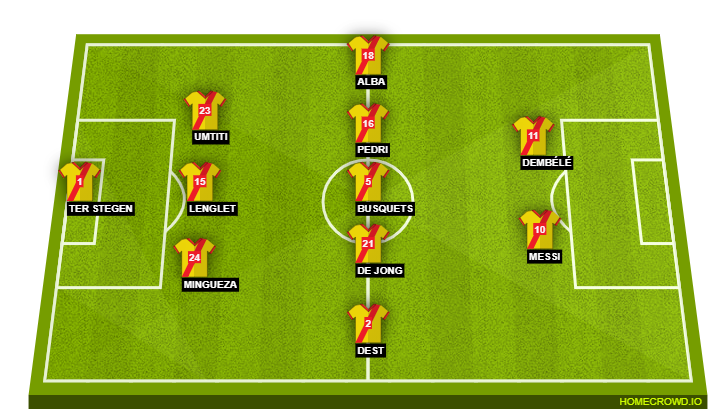 Who else but the diminutive wizard? If Barcelona stand any chance of overturning the big three-goal deficit and reach the UEFA Champions League quarter-finals, Lionel Messi has to deliver the goods on Wednesday. The Argentine has been in fine touch lately and should make a nuisance of himself in Paris. But, will it be enough? That is what remains to be seen.

Ever since their defeat in the reverse fixture, Barcelona have shown major improvements, with Ronald Koeman showing his mettle as the club’s first-team boss. PSG, though, are another level of formidable altogether. Having said that, Barcelona and their change in approach should catch their hosts by surprise to some extent.

Expect the Blaugrana to take the fight to Mauricio Pochettino’s men, with Lionel Messi running riot over the course of the game. In the end, though, Barcelona might fall just short, despite claiming a hard-fought 3-1 win, with PSG progressing to the quarter-finals with a 5-4 aggregate scoreline.