Juventus will be eager to continue their fine run of form when they take on Napoli at the Diego Armando Maradona Stadium on Saturday.

The games continue to come thick and fast across Europe and in Italy, Matchday 22 of the 2020/21 Serie A season will be played out this weekend. The action begins this Friday while there are three matches on show on Saturday, when defending champions Juventus will take the field at the Diego Armando Maradona Stadium to lock horns with Napoli.

Napoli have blown hot and cold over the ongoing campaign, showing some very promising signs to build on last season’s Coppa Italia triumph at times while going completely off the boil for a few games in a row. This has been the running theme since the turn of the year, as the Partenopei have lost six of the 12 games they have played in 2021, with the pressure mounting on Gennaro Gattuso.

Juventus, on the other hand, have tightened the screws since the turn of the year, winning 10 of the 12 games that they have played in 2021. This has largely been down to the turnaround in defence, while Cristiano Ronaldo has been in phenomenal scoring form. Coming into this weekend’s fixture, the Bianconeri have celebrated progression through to the Coppa Italia final, having beaten Inter Milan in the penultimate stage.

The reverse fixture was called off in controversial circumstances and will be played again, but Napoli have faced Juventus once this term, with Andrea Pirlo’s men grabbing a 2-0 win in the Italian Super Cup. Ahead of the latest meeting between the two sides, The Hard Tackle takes a closer look at the encounter.

Kalidou Koulibaly is one of five Napoli players that will miss out against Juventus. (Photo by Francesco Pecoraro/Getty Images)

Gennaro Gattuso has a number of pressing roster issues hampering his preparations ahead of the visit of Juventus. On Saturday, the Napoli manager will be bereft of the services of as many as five first-team players.

Elseid Hysaj (calf), Konstantinos Manolas (ankle) and Dries Mertens (ankle) are all on the sidelines due to their respective injury issues. In addition, Kalidou Koulibaly and Faouzi Ghoulam also miss out as they continue to self-isolate after contracting COVID-19.

Gattuso should line his side up in a 4-2-3-1 formation, with David Ospina taking his place in goal. In front of him, Nikola Maksimovic and Amir Rrahmani pick themselves at the heart of the Napoli defence, seeing as Manolas and Koulibaly are unavailable. Out wide, Giovanni Di Lorenzo and Mario Rui are certainties in the full-back spots.

The two full-backs will be asked to bombard forward at every given opportunity, but will also be tasked with falling back at pace during turnovers, with the attacking quartet forming the first line of press. Speaking of the attack, Victor Osimhen should continue to lead the line for Napoli against Juventus despite seeing his struggles continue last time out against Atalanta.

Osimhen will be supported by Lorenzo Insigne and Hirving Lozano, who will be the two wide men. The duo have been in fine touch this season and will be the men Gattuso looks towards for goals on Saturday. Piotr Zielinski will reprise the no. 10 role, while Tiemoue Bakayoko and Eljif Elman will likely form the double pivot, with the pair looking to keep things tight in the middle of the park. 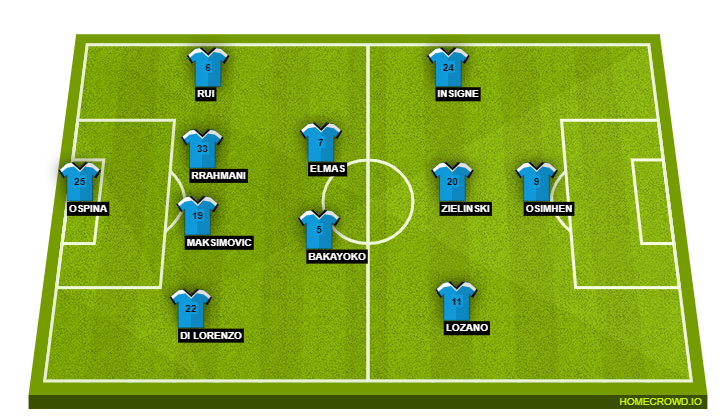 Unlike his counterpart in the Napoli dugout, Andrea Pirlo barely has any fitness issues to contend with ahead of the trip to the Diego Armando Maradona Stadium. In fact, on Saturday, the Juventus manager will have a near-full strength squad at his disposal, with Franco Israel and Arthur the only players who are unavailable.

Wojciech Szczesny is the automatic pick between the sticks, with Juventus set to line up in Pirlo’s trademark 4-4-2 formation. This will see the right-back Juan Cuadrado play practically as a wing-back, with the left-back sitting back to form an auxiliary three-man central defensive unit during the possession phase.

This aforementioned left-back ought to be Danilo, who will combine with Matthijs de Ligt and Giorgio Chiellini to have enough men behind the ball in case of quick transitions. This means the right midfielder, likely to be Weston McKennie, will tuck in and form a three-man central midfield partnership along with Adrien Rabiot and Rodrigo Bentancur.

Finally, the strike partnership ought to be formed by Alvaro Morata and talisman Cristiano Ronaldo. Morata will come in for Dejan Kulusevski, who will be a factor off the bench later on in the game, in case Napoli frustrate Juventus deep into the tie. 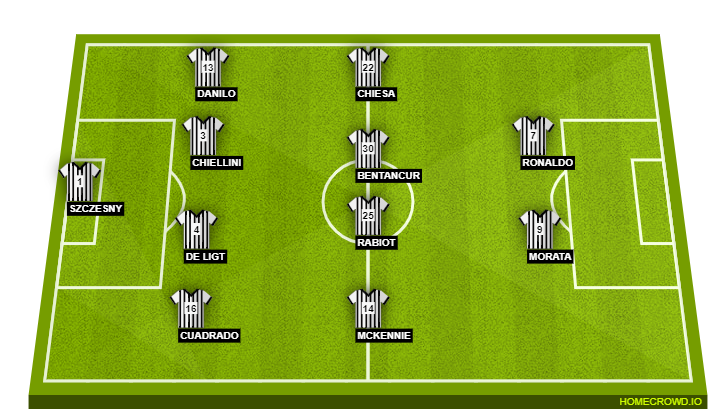 Who else but Cristiano Ronaldo? The Portuguese sensation has been the single-most influential figure for Juventus this season, directly contributing to nearly half of the 41 goals that they have netted this term (16 goals and 2 assists). And, if the Bianconeri are to get anything from this game against what will be a resolute Napoli side, Ronaldo will need to be in his elements. If not, a stalemate could well be in order.

In recent weeks, Juventus have discovered that swagger that is needed to mount a push for the Serie A title. With just one league defeat in 2021 till date, they are closing the gap to the two Milan sides. However, these are the sort of games that a team needs to win in order seal a triumphant league campaign.

Despite their inconsistencies since the turn of the year, Napoli are not a side to be taken lightly and the hosts will surely make things difficult for the defending champions. In the end, however, Cristiano Ronaldo’s quality should shine through, with Juventus eking out a narrow 1-0 win.