Inter Milan and Juventus will aim to take a step closer to the Coppa Italia final when they meet in the semi-final first leg at San Siro on Tuesday.

Matchday 20 of the 2020/21 Serie A season ended this past weekend and the next round of fixtures begins in the coming weekend. Between then, the Coppa Italia semi-finals first leg ties are set to be played out, with the first of the two games taking place between Inter Milan and Juventus at San Siro on Tuesday night.

Inter Milan entered the Coppa Italia at the Round of 16 stage, where they narrowly eked out a 2-1 win over Fiorentina after the game entered extra-time. In the quarter-finals, the Nerazzurri came from behind before beating local rivals AC Milan 2-1 in a fiery encounter. They then backed it up with a 4-0 rout of Benevento, meaning the hosts come into this game in fine form.

Juventus have been in an even better touch lately, having been beaten just once in nine outings in all competitions in 2021. While that sole defeat did come at the hands of Inter Milan, the visitors will take heart from the fact that they have won the remaining eight fixtures, including both their games in the Coppa Italia this season as well as the Serie A tie versus Sampdoria this past weekend.

Inter Milan and Juventus have already locked horns once this season, with Antonio Conte’s men coming out on top with a 2-0 win in that game. Ahead of the latest meeting between the two sides, The Hard Tackle takes a closer look at the encounter.

"If you want to win these types of matches, there's very little margin for error."

Antonio Conte has a couple of fresh roster issues hampering his preparations ahead of the visit of Juventus. On Tuesday, the Inter Milan manager will be bereft of the services of as many as three first-team players.

While only one of those absentees has been forced due to an injury – Danilo D’Ambrosio – the other two miss out due to suspension. Those players are Achraf Hakimi and Romelu Lukaku, two of the top three scorers for Inter Milan this season and also two of their most important players. That means Conte will be forced to make at least two changes against Juventus.

In Lukaku’s stead, Alexis Sanchez should form the strike partnership along with Lautaro Martinez, getting a golden opportunity to make an impression. Meanwhile, in the absence of Hakimi, Matteo Darmian becomes a certainty in the right wing-back slot. Darmian, though, will not pose as great a threat down the right flank as Hakimi.

To offset Darmian’s lack of an end product, Ashley Young will likely be involved a great deal from the left wing-back slot. The onus will also be on Nicolo Barella to provide the creative impetus from the middle of the park, with Marcelo Brozovic and former Juventus midfielder Arturo Vidal shoring up the defensive side of things for Inter Milan.

Finally, in defence, Aleksandar Kolarov could be set to receive a rare start alongside Stefan de Vrij and Milan Skriniar, following Alessandro Bastoni’s long excursion in the Serie A last time out. While in goal, there is no looking past captain Samir Handanovic. 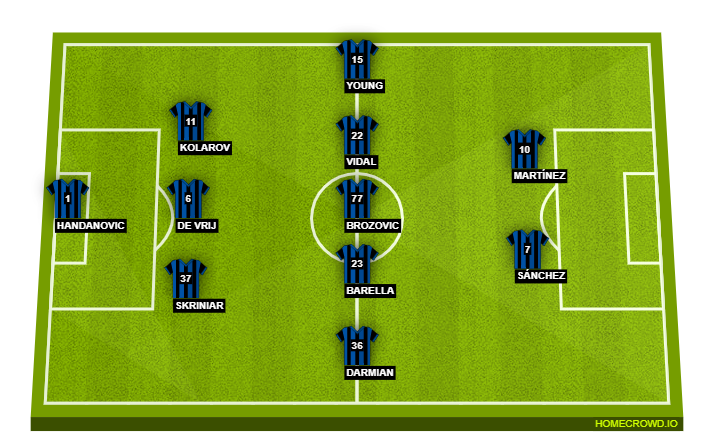 Unlike his counterpart in the Inter Milan dugout, Andrea Pirlo does not have any fresh injury concerns to contend with ahead of the trip to San Siro. On Tuesday, the Juventus boss will have to make do without just one first-team player, with Paulo Dybala still struggling overcome a knee complaint.

In Dybala’s continued absence, Dejan Kulusevski and Alvaro Morata are the only options to partner Cristiano Ronaldo in the final third. This time around, Kulusevski ought to get the nod to form the strike partnership alongside Ronaldo, with Morata dropping to the bench.

The midfield unit is unlikely to see any major shuffles, though. Federico Chiesa, who was influential once again last time out against Sampdoria, will continue on the left flank, with the in-form West McKennie picking himself on the opposite flank. In the middle, Arthur and Rodrigo Bentancur are certainties as well.

Chiesa will essentially play as a left wing-back in the offensive phases, with McKennie tucking in alongside Arthur and Bentancur to allow the right-back Juan Cuadrado the freedom to bombard forward. The rest of the Juventus defence, comprising of Leonardo Bonucci, Matthijs de Ligt and Alex Sandro, will mostly remain compact at the back, protecting veteran Gianluigi Buffon in goal. 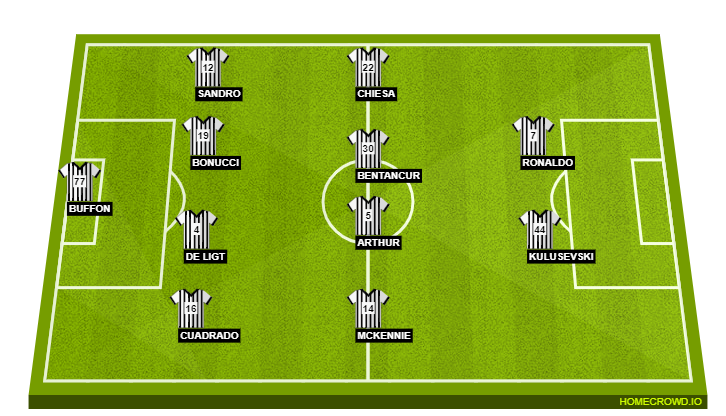 It goes without saying that Romelu Lukaku is one of the most important players for Inter Milan and perhaps, even the single-most influential member of the squad. And so, with the Belgian striker not available to take on fierce rivals Juventus, the Nerazzurri will likely suffer. However, the crisis has also brewed an opportunity for a certain Alexis Sanchez.

Signed permanently from Manchester United after impressing last season on loan, Sanchez has not been able to replicate his heroics till date this season at Inter Milan. But with Lukaku missing, this is now Sanchez’s chance to impress and show that he still has a lot to offer to Antonio Conte’s side, especially amid reports of what turned out to be failed swap deal involving Edin Dzeko.

Inter Milan looked quite imperious in the win over Benevento despite missing some of their key stars. However, against Juventus, they will be missing their most pivotal player, which will invariably have an effect on their output in the final third, although Stefan de Vrij’s presence on the opposite end will likely keep Juventus at bay for long periods.

Cristiano Ronaldo ought to be a factor as he so often does in big knockout games, but as is so often the case at Juventus, the Portuguese superstar could lack the right kind of support from his teammate apart from the brilliant Federico Chiesa. Expect Nicolo Barella to shine through, which will ultimately tip the scales in the favour of Inter Milan, who should edge the first leg 2-1.