Everton will welcome Leicester City to Goodison Park on Wednesday with the game having plenty at stake as far as the top four race goes.

The action will just not relent anywhere across Europe and in the Premier League, the second half of the 2020/21 season is underway with Gameweek 20. One of the more intriguing match-ups this midweek will be played at Goodison Park on Wednesday night, when Everton play hosts to Leicester City, with both sides needing a win to further their quest for a top-four finish.

Everton have made giant strides under the tutelage of Carlo Ancelotti, who is transforming the Toffees into genuine top four contenders and perhaps, even more. As thing stand, Everton could theoretically be just two points behind table-toppers Manchester United, if they win both the games they have in hand. Their recent form is promising as well, with just one loss in their last six ties.

Leicester, on the other hand, are also making a case for themselves to be outside contenders for the Premier League title. The Foxes have once again impressed under the stewardship of Brendan Rodgers, who has forged an exciting unit. Leicester are currently third on the table, just two points adrift of Manchester United and are unbeaten in eight games across all competitions.

The reverse fixture, played at the King Power Stadium last month, saw Everton claim a hard-fought 2-0 win over Leicester City, courtesy goals from Richarlison and Mason Holgate. Ahead of the latest meeting between the two sides, The Hard Tackle takes a closer look at the encounter.

Carlo Ancelotti has a fresh roster issue hampering his preparations to a great extent ahead of the visit of Leicester City. On Wednesday, the Everton manager will be bereft of the services of as many as five first-team players due to injuries and suspension.

Abdoulaye Doucoure is the latest player to be sidelined due to a one-match ban after he accrued his fifth yellow card in the first half of the 2019/20 Premier League season. Apart from Doucoure, the likes of Niels Nkounkou (hamstring), Fabian Delph (thigh), Jean-Philippe Gbamin (Achilles) and Allan (thigh) remain unavailable, but could all be returning in the coming weeks.

However, in some good bit of news, Ancelotti has a couple of players back at his disposal as well, with Lucas Digne and Alex Iwobi both available of selection. The duo should return to the starting lineup straightaway, with Digne a certainty in the left-back slot while Iwobi’s improved form warrants a place for him on the right side of the Everton attack.

Iwobi will provide company to Richarlison, James Rodriguez and Dominic Calvert-Lewin in the final third, with Everton at full strength in the attacking department. Richarlison will look to play off of Calvert-Lewin with the duo forming an auxiliary strike partnership, whereas Rodriguez will likely be joined by Gylfi Sigurdsson during the offensive phases in the central areas.

Sigurdsson, though, will primarily sit deep following the turnover of possession, looking to contain the Leicester threat off the ball in a double pivot along with Andre Gomes. At the back, Mason Holgate ought to start as the right-back, which will pave the way for a lopsided backline.

This defensive line will take the form of a back-three when Digne charges forward, with Holgate sitting narrow alongside Yerry Mina and Michael Keane, whereas Iwobi will provide the width on the right flank. Finally, in goal, there is no looking past Jordan Pickford. 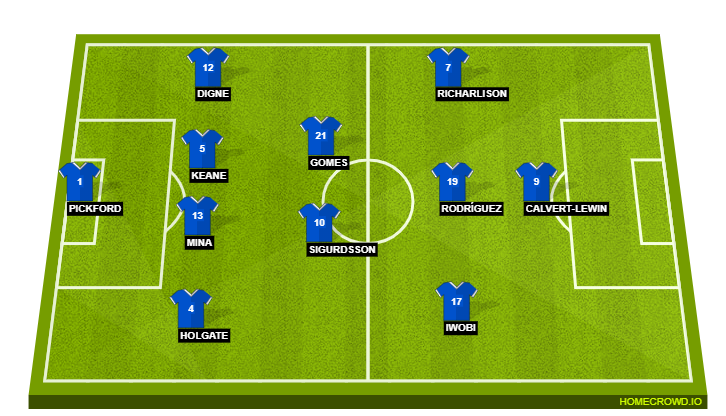 Like his counterpart in the Everton dugout, Brendan Rodgers has a fair few fresh issues to contend with ahead of the trip to the King Power Stadium. On Wednesday, the Leicester City manager will have to make do without three first-team players.

The major absentee for the visitors will be Jamie Vardy, who misses out after undergoing a hernia operation. Apart from the star striker, Leicester will also be without captain Wes Morgan (back) and Dennis Praet (thigh), although neither player’s absence is nearly as concerning as Vardy’s.

It will be interesting to see who Rodgers picks to lead the line for Leicester against Everton. Kelechi Iheanacho would be the logical replacement but after being selected as the central striker versus Brentford in the FA Cup, Ayoze Perez could be given the nod once again. The key man in Vardy’s absence, though, will be James Maddison.

The English international is in the form of his life, having scored three goals in as many games. And while he will hold the key with his passes through the lines, Maddison will also need to step up in front of goal. Out wide, Maddison will be supported by Harvey Barnes and Marc Albrighton while Youri Tielemans will be his creative partner.

Tielemans will also provide defensive support to Wilfred Ndidi, who will look to keep things tight in the middle of the park. Ndidi will provide cover to Wesley Fofana and Jonny Evans at the heart of the Leicester defence while James Justin and Timothy Castagne will be the full-backs carrying a great deal of threat in the final third. 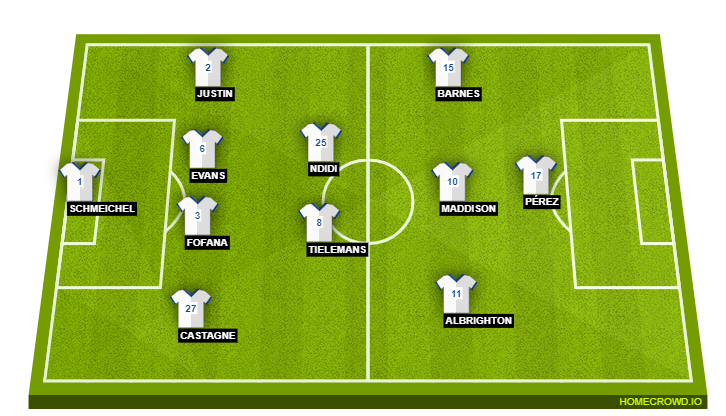 There were plenty of options for this one, especially with Dominic Calvert-Lewin being back among the goals this past weekend and Richarlison impressing lately. However, with James Maddison in the form of his life, he just pips the others ever so slightly.

Maddison is on the cusp of history, seeing as he could become the first Leicester player other than Jamie Vardy to score in four successive top-flight matches since Steve Moran from December 1986 to January 1987.

Speaking of Vardy, the absence of Leicester’s star striker could indeed be telling, which only adds to the burden on Maddison’s shoulders. It will, therefore, be interesting to see if this new-found prolific nature in the final third continues to bear the positive results. A big game beckons Maddison.

This is one of those games that can really go either way. The absence of Jamie Vardy has brought Everton to a level field against Leicester City, especially in the wake of Dominic Calvert-Lewin’s exploits this past weekend in the FA Cup. The fact that Vardy is unavailable, though, could be quite telling for Leicester, who will depend a great deal of James Maddison.

On the opposite end, Calvert-Lewin and Richarlison will be in contention to make a difference. But, Everton’s recent record at home does not offer much confidence and it should eventually be very difficult to separate the two sides. With that in mind, The Hard Tackle predicts Everton and Leicester to play out a 1-1 draw.