Liverpool will be eager to keep pace with those ahead of them in the Premier League table when they face Burnley at Anfield on Thursday.

The games continue to come thick and fast in the Premier League as the elongated Gameweek 19 of the 2020/21 season goes on. Defending champions Liverpool will be in action on Thursday night, when they play hosts to Burnley at Anfield, desperate to bounce back to winning ways.

Liverpool have been stuttering after being the pacesetters in the Premier League for a long time. However, the failure to win each of their last four top-flight fixtures has sent them sliding down the table and the Reds now sit fourth. The most recent of the winless results came in the form of a 0-0 draw with Manchester United, who are six points ahead of Jurgen Klopp’s men ahead of the game.

Burnley, on the other hand, have flirted with relegation in the first half of the season so far and that prospect has not been helped by a run of three defeats in their last four Premier League games. The Clarets have now suffered back-to-back 1-0 losses, which means they are 17th heading into their midweek fixture, albeit with at least one game in hand over those in front of them.

The corresponding fixture last season saw Burnley come from a goal down to hold Liverpool to a 1-1 draw, with Andrew Robertson and Jay Rodriguez the goalscorers on the day. Ahead of the latest meeting between the two sides, The Hard Tackle takes a closer look at the encounter.

Jurgen Klopp has been given a major boost on the team news front ahead of the visit of Burnley. On Thursday, the Liverpool manager will still be bereft of the services of five first-team players, but now has Joel Matip available for selection again after several weeks.

The Cameroonian defender has taken part in full training ahead of the midweek fixture and should be in contention to start. Klopp, though, still has the likes of Virgil van Dijk (knee), Kostas Tsimikas (knee), Joe Gomez (knee), Naby Keita (match fitness) and Diogo Jota (knee) out on the sidelines.

Matip’s availability, though, should mean that captain Jordan Henderson returns to his role in the middle of the park, with Matip set to pair up with Fabinho at the heart of the Liverpool defence. Trent Alexander-Arnold and Andrew Robertson pick themselves as the full-back duo, with both players in desperate need of improving their output in the final third.

Alexander-Arnold and Robertson will indeed hold the key for Liverpool when it comes to creative output, with their deliveries from the flanks. In goal, there is no looking past Alisson Becker, who was brilliant against Manchester United last time out.

Henderson, as iterated earlier, will be back in his usual role in midfield, sitting at the base of the three-man unit, with Thiago being freed up to reprise the box-to-box midfield role. The third man in the middle of the park ought to be Curtis Jones, who will come in for Georginio Wijnaldum to provide more creative impetus from the midfield.

Finally, in attack, Mohamed Salah, Roberto Firmino and Sadio Mane are all automatic picks. The three forwards, though, need to step up big time after largely going anonymous during Liverpool’s recent winless run in the Premier League. 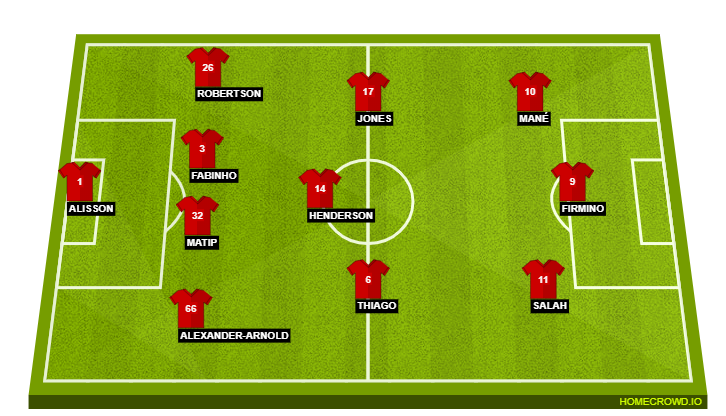 Like his counterpart in the Liverpool dugout, Sean Dyche has been handed an injury boost ahead of the trip to Anfield. On Thursday, the Burnley boss will have to make do without just one first-team player, with Bailey Peacock-Farrell recovering from an illness.

The good news, though, comes in the form of Charlie Taylor’s availability following his recovery from a hamstring injury. The Englishman should be back in the starting lineup straightaway, coming into the side in place of Erik Pieters.

The rest of the Burnley defence will remain unchanged, with Matthew Lowton being the right-back while Ben Mee and James Tarkowski will form the central defensive partnership. Nick Pope will be the man in goal for the visitors and the English international will have a key role to play between the sticks.

Up ahead in midfield, a second bank of four that will sit behind the ball for large parts of the game will likely comprise of Ashley Westwood and Josh Brownhill in the central areas, with Robbie Brady and Dwight McNeil occupying the wide midfield berths.

McNeil, in particular, will have a major role to play on both ends of the pitch, with his deliveries holding the key in the final third. Ashley Barnes and Chris Wood, the two Burnley strikers, will look to be at the end of these deliveries, looking to put the Liverpool defence to the sword whenever given a chance. 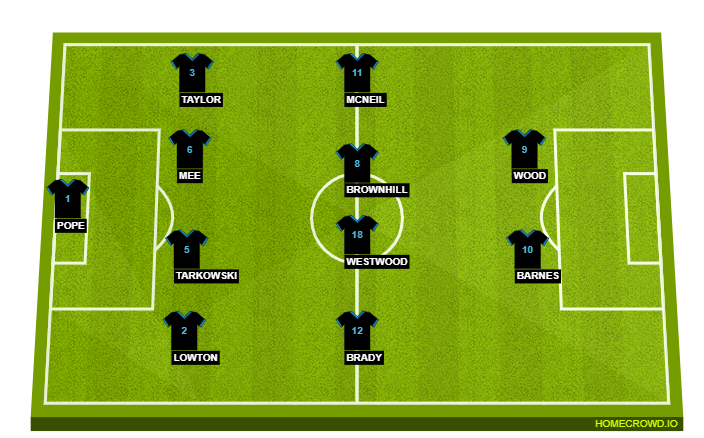 Time to step up. (Photo by Oscar Del Pozo/AFP via Getty Images)

It has been quite a strange season for Mohamed Salah. The Egyptian wing wizard sits atop the Premier League scoring charts with 13 goals to his name so far. However, Salah has never been as inconsistent in a Liverpool shirt than he has been this term and has now gone four league games without a goal.

It is evident just how crucial his output in front of goal really is for Liverpool and if they are to take anything from the game against Burnley and arrest their slide, it is Salah who needs to deliver the goods. A big game for Salah and Liverpool as they look to keep pace with the front-runners in the Premier League title race.

This is a game between two sides for whom goals have come at a premium lately. Liverpool have bizarrely lacked the threat in the final third, with their two full-backs in addition to Mohamed Salah not quite being at their best. Burnley, on the other hand, have the worst goalscoring record in the Premier League this season.

With that being said, one thing that appears to be certain is that this game will not have too many goals in it. In fact, Burnley’s run of matches ending with a 1-0 scoreline should continue, albeit with the Reds grabbing all three points in this case. Salah and his attacking partners will feed off scraps all game, but should be able to produce one moment of brilliance to end the Reds’ winless run.