Manchester United will hope to climb to the top of the Premier League table when they take on Burnley at Turf Moor on Tuesday.

The action is showing no signs of slowing down just yet, as games continue to come thick and fast all across Europe. In England, this week brings us Gameweek 18, which is a slightly compressed round of fixtures. Manchester United, though, will be playing their postponed match from the opening weekend, as Burnley play hosts to them at Turf Moor on Tuesday.

Burnley have recovered superbly from a frustrating start to the season and are now slowly but surely moving up the Premier League table. The Clarets have faced defeat in just one of their last seven games across all competitions, having tightened things up at the back. Their most recent result was a win over MK Dons in the FA Cup, with the game going to penalty shootouts.

Manchester United, on the other hand, have continued to take big steps forward under the tutelage of Ole Gunnar Solskjaer this season. Like Burnley, the Red Devils had also made a slow start to their Premier League campaign, spending a few weeks in the bottom half. However, heading into Tuesday’s clash, Manchester United now have the chance to climb to the summit of the top-flight.

The corresponding fixture last season saw Manchester United beat Burnley 2-0, courtesy goals by Anthony Martial and Marcus Rashford. Ahead of the latest meeting between the two sides, The Hard Tackle takes a closer look at the encounter.

Sean Dyche has been handed a major boost ahead on the team news front ahead of the visit of Manchester United. On Tuesday, the Burnley manager is only likely to be bereft of the services of three first-team players in the worst-case scenario.

The big positive update surrounds the fitness of Nick Pope, who is set to return to the starting lineup after recovering from a minor ankle injury. Ashley Westwood and Josh Brownhill, both of whom had been unavailable for the FA Cup clash against MK Dons, are likely to be available as well after recovering from the coronavirus, as per Dyche in his pre-match press conference.

Meanwhile, the likes of Dwight McNeil, Charlie Taylor, Jay Rodriguez and Kevin Long will face late fitness tests to determine their available, although the quartet are hopeful of being in contention to feature. The fit-again Pope should take his place in goal, with Burnley setting up in their typical 4-4-2 formation.

This setup will see the Clarets sit in twin banks of four when behind the ball, with the two strikers also tucking in to kill off space for the Manchester United defenders to work with. Going forward, the objective will be to provide dangerous pinpoint crosses that would test the United centre-backs.

Taylor’s dicey availability prospects mean that Erik Pieters will once again be Burnley’s left-back, with Matt Lowton starting on the right flank. At the heart of the Burnley defence, captain Ben Mee will pair up with James Tarkowski, with the duo looking to be imposing in the air on both ends of the pitch.

Up ahead in midfield, Westwood and Brownhill should start if cleared, with Jack Cork and Dale Stephens on standby to start in the centre of the park. McNeil ought to return, though, with his prowess on set-pieces likely to come in handy.

The final spot in the middle of the park should be handed to Robbie Brady, who has been pretty decent since his return from injury. Finally, Chris Wood and Ashley Barnes will likely form the strike partnership, with the duo posing a threat in the air, while Barnes will also look to be a disruptive figure higher up the pitch to throw the Manchester United defenders off their game. 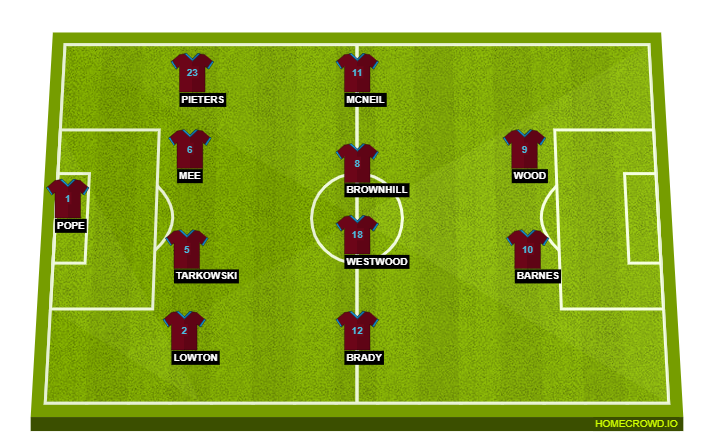 Ole Gunnar Solskjaer does not have many roster issues hampering his preparations ahead of the trip to take on Burnley at Turf Moor. On Tuesday, the Manchester United manager is only likely to have to make do without a couple of players.

Eric Bailly and Paul Pogba are both set to face late fitness tests to determine their availability. However, with the Liverpool game on the horizon, Solskjaer is unlikely to take a chance on the duo against Burnley. Victor Lindelof and Luke Shaw have been cleared to return while Edinson Cavani is set to return after missing the last three games due to suspension.

Cavani is in line to spearhead the Manchester United attack against Burnley, with Anthony Martial then moving out to the left-wing slot. Marcus Rashford will, therefore, be stationed on the right flank, although he will need to be more unpredictable in his movement on his side. Rashford and Martial will look to take on Burnley on while Cavani will play off the defenders’ shoulders.

Bruno Fernandes will reprise the no. 10 role after being rested on the weekend. Given what he brings to the table as well as his importance in the side, it goes without saying that the Portuguese international will aim to carve out the openings and pull the strings higher up the pitch.

In midfield, Pogba’s potential absence means that the tireless Scott McTominay ought to start in the double pivot again. The young midfielder made the difference as Manchester United grabbed a narrow win over Watford in the FA Cup. Fred will sit alongside him in the double pivot, meaning McTominay will have the license to charge forward on the odd occasion with Fred holding the fort.

At the back, Lindelof should be fit enough to form the central defensive partnership with captain Harry Maguire. Shaw, though, is unlikely to be risked ahead of the game against Liverpool later this week. On the right side of the Manchester United defence, Aaron Wan-Bissaka is a certain starter, while David de Gea ought to return between the sticks.

Cavani’s stint so far at Manchester United has been defined by a couple of occurrences. The veteran striker has chipped in with quite a few crucial goals already. However, just when he looked likely to nail down his spot for good, an ill-timed stoppage has put paid to those hopes.

Now, with his suspension finally over, Cavani can set about battling for the central striker’s berth. The game against Burnley also serves as the ideal warm-up for the big one against Liverpool on the weekend. It will also be interesting to see how Cavani hits back after the suspension, and he will surely be raring to go.

This is not a game that is easy to call. Manchester United have been by far the best travelling team in the Premier League this season, despite their frailties at the back. Burnley, on the other hand, have steadily improved, especially at home, where they are unbeaten in five games.

Having said that, with Bruno Fernandes continuing to go from strength to strength and making all the difference for Manchester United, it will be extremely difficult for Burnley to keep a lid on the marauding Red Devils. And so, we reckon Manchester United will do enough to grab all three points to claim the summit of the Premier League ahead of the top-of-the-table clash this weekend.