Manchester United will hope to continue their fine unbeaten run in the Premier League when they welcome Leeds United to Old Trafford on Sunday.

The festive period in England is well and truly underway, and as the temperature plummets across the country, the heat of the action just continues to mount. One of the more intriguing match-ups in Gameweek 14 of the Premier League will see a renewal of an old, heated rivalry at Old Trafford on Sunday when Manchester United play hosts to Leeds United.

Manchester United have put a horrendous start to their 2020/21 Premier League campaign behind them and have now gone six games without defeat (W5 D1). The ouster from the UEFA Champions League has not had a knock-on effect on results in domestic football so far and they will be eager to continue their rise up the table this weekend.

Leeds United, on the other hand, have blown hot and cold since making their long-awaited return to the top-flight. Marcelo Bielsa’s charges have managed to win just two of their last six games in the Premier League, a run of results that has left them 13th on the table, although the Whites come into this game on the back of a crucial 5-2 win over Newcastle United earlier this week.

Manchester United and Leeds ended up sharing the spoils at the end of a 1-1 draw the last time these two sides locked horns at Old Trafford in a Premier League game. Ahead of the latest meeting between the two sides, The Hard Tackle takes a closer look at the encounter.

Edinson Cavani is closing in on his return for Manchester United. (Photo by Mark Robinson/Getty Images)

Ole Gunnar Solskjaer has been handed a major injury boost ahead of the visit of Leeds United. On Sunday, the Manchester United boss is likely to have a full-strength squad at his disposal, with Phil Jones, who is not a part of United’s Premier League roster, being the only player who is sidelined.

The good news comes in the form of Edinson Cavani’s possible return, with the Uruguayan striker stepping up his recovery from a minor injury. Cavani will face a late fitness test to determine his availability against Leeds on Sunday but is only likely to make the bench in the game.

With Cavani only likely to be a substitute, Anthony Martial will continue to lead the line for Manchester United, who will set up in a 4-2-3-1 formation once again. Marcus Rashford, who made the difference with a match-winning brace against Sheffield United, will once again take up the left-wing berth, with Mason Greenwood stationed on the right flank.

Bruno Fernandes, who has now gone two successive games without a director contribution to a goal, will reprise the no. 10 role again, with any rotations likely to be made in the midweek cup tie against Everton.

That also means that Paul Pogba, who was sensational against Sheffield United, should line up in the double pivot, with Fred likely to be his partner this time around. The Brazilian will replace Nemanja Matic in the middle of the park, with his inclusion primarily aimed at negating the high-intensity nature of Leeds United’s gameplay.

At the back, Luke Shaw ought to come in for Alex Telles, as Solskjaer continues to manage his game-time. Harry Maguire, Victor Lindelof and Aaron Wan-Bissaka, though, remain automatic picks in the four-man defensive line, while David de Gea should come in for Dean Henderson in the Manchester United goal.

Marcelo Bielsa does not have any fresh injury concern hampering his preparations ahead of the trip to Old Trafford. Against Manchester United on Sunday, the Leeds United manager will have to make do without as many as three first-team players.

The main concern comes in defence, with Diego Llorente (groin) and Robin Koch (knee) both on the sidelines. The third absentee for Leeds is Adam Forshaw (hip), but his unavailability does not really cause Bielsa a great deal of problem, considering he has plenty of cover in his squad. There are no concerns in goal either, with Illan Meslier set to be stationed between the sticks.

In the absence of Llorente and Koch, Luke Ayling ought to start at the heart of the Leeds defence along with captain Liam Cooper. Ayling’s vacated right-back slot will continue to be occupied by Stuart Dallas, while Ezgjan Alioski will be the visitors’ left-back. Dallas and Alioski will pose a great deal of threat bombarding down their flanks, shouldering the creative burden out wide.

Up ahead in midfield, Kalvin Phillips will play the Anchor Man role, looking to neutralise the influence of Bruno Fernandes while initiating the transitions for Leeds. Mateusz Klich will hold the key higher up the pitch with his passing through the channels and his set-piece prowess will pose a threat against a vulnerable Manchester United backline.

The likes of Raphinha, Rodrigo Moreno and Jack Harrison will support central striker Patrick Bamford, with the quartet likely to bombard the spaces in and around the Manchester United box. Bamford’s ghosting runs during open play will hold the key as well for Leeds. 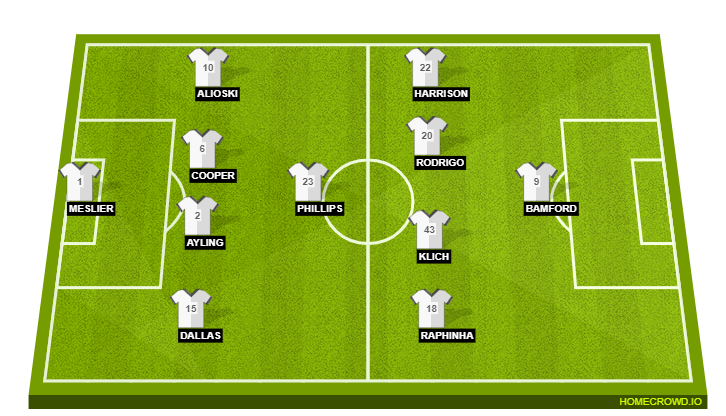 However, some off-field issues coupled with the fact that teams are slowly starting to figure him out have meant that the teenage prodigy has not enjoyed the same flourish so far this season. Till date, he has just 3 goals in 15 appearances across all competitions.

Greenwood has revealed how he is learning a great deal from Edinson Cavani and Ole Gunnar Solskjaer will hope that those lessons start having a telling effect sooner rather than later. A game against an open Leeds United side might be just what the doctor ordered and Greenwood will be eager to be more involved than he was earlier this week against Sheffield United.

The thumb rule is that there is never a dull Leeds United game and so far this season there has only been one exception to the rule. A Manchester United side that continues to have shortcomings at the back is surely a recipe to serve up a delectable Leeds fixture once again.

The Whites will surely pose a threat all through the game and Manchester United’s poor record at Old Trafford in the Premier League this season means they might fancy their chances. However, a purposeful Bruno Fernandes should take the field on Sunday after a couple of games without a direct contribution towards a goal.

With Marcus Rashford growing in stature, Mason Greenwood intent on making an improvement and Anthony Martial finally getting off the mark in the Premier League, Manchester United do seem to be in the right frame of mind to continue their fine run in the top-flight. To that end, The Hard Tackle predicts a 3-1 win for Ole Gunnar Solskjaer & co.