Inter Milan will have the chance to claim top spot on the Serie A table when they welcome Spezia to San Siro on Sunday.

Matchday 13 of the 2020/21 Serie A season will come to a close on a jam-packed Sunday, with as many as seven matches on show. Inter Milan will be one of the first teams in action on the day, as they play hosts to newly-promoted Spezia at San Siro, hoping to consolidate their place higher up the table.

Inter Milan have recovered from a slow start to the Serie A campaign, and a heart-breaking UEFA Champions League campaign to come within a point of the Serie A summit. Antonio Conte & co. have now won each of their last five league games, including a crucial 1-0 success against Napoli earlier this week.

Spezia, on the other hand, have endured a harsh leveller following a fine start to their maiden Serie A campaign. In fact, in direct contrast to Inter’s recent league form, the Aquilotti have failed to win their last five games, although they have managed to escape with a draw in three of those fixtures, meaning Vincenzo Italiano & co. are four points clear of the drop zone.

This will be the first-ever Serie A meeting between Inter Milan and Spezia, although the two sides last met in Coppa Italia in August 1989, when Inter eked out a narrow 1-0 win. Ahead of the latest meeting between the two sides, The Hard Tackle takes a closer look at the encounter.

Alexis Sanchez is one of five Inter Milan players unavailable for the visit of Spezia. (Photo by Paolo Rattini/Getty Images)

Antonio Conte has a fresh injury concern hampering his preparations ahead of the visit of Spezia. On Sunday, the Inter Milan manager could be bereft of the services of as many as five first-team players, with Marcelo Brozovic the latest absentee.

The Croat is likely to miss out due to a foot injury, and he joins Arturo Vidal (thigh), Matias Vecino (knee), Andrea Pinamonti (muscle injury) and Alexis Sanchez (thigh) on the sidelines. However, in some good news, Radja Nainggolan has recovered from a calf problem and adds to Conte’s options in midfield.

Nainggolan, though, is likely to have to make do with a place on the bench, with Stefano Sensi in line to replace Brozovic in the starting lineup. That means Roberto Gagliardini moves into the base of the midfield, with Sensi and Nicolo Barella providing the forward thrust from the middle of the park.

As for the rest of the side, Conte might look to rotate his troops as much as he can, meaning Danilo D’Ambrosio and Aleksandar Kolarov could come in to partner Stefan de Vrij in the three-man central defensive unit, while Achraf Hakimi and Ivan Perisic could line up as the two wing-backs. In the Inter Milan goal, however, there is no looking past captain Samir Handanovic.

Upfront, though, there is unlikely to be any alteration made to the strike partnership, owing to Sanchez’s absence. As a result, Romelu Lukaku and Lautaro Martinez will continue their formidable pairing in the final third. 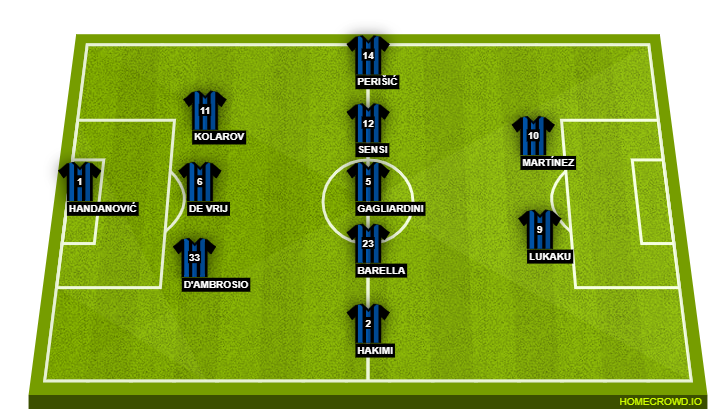 Unlike his counterpart in the Inter Milan dugout, Vincenzo Italiano has received a boost in terms of his squad selection instead of greeting bad news on the team news front. However, the Spezia boss might still have to make do without as many as five first-team players on Sunday.

The likes of Jeroen Zoet (groin), Andrej Galabinov (muscle injury), Elio Capradossi (knee) and Federico Mattiello (muscle injury) remain on the sidelines. However, Juan Ramos is likely to be at Italiano’s disposal after recovering from a muscle injury. The Spezia manager could even have the likes of Cristian Dell’Orco and Daniele Verde back in the fold, meaning he could name a strong side.

However, centre-back Julian Chabot is suspended and will likely be replaced by captain Claudio Terzi at the heart of the Spezia defence, where he will have Martin Erlic as his partner. Salva Ferrer should retain his spot on the right flank, but Riccardo Marchizza should make way for Simone Bastoni in the left-back slot. In goal, Ivan Provedel ought to continue deputising for Zoet.

In front of Zoet, Spezia will line up in a 4-3-3 formation, with the three midfielders – likely to be Matteo Ricci, Tommaso Pobega and Nahuel Estevez – tasked with keeping things tight in the middle of the park. M’Bala Nzola should lead the line for the visitors against Inter Milan, with Emmanuel Gyasi and Diego Farias being the two wide men. 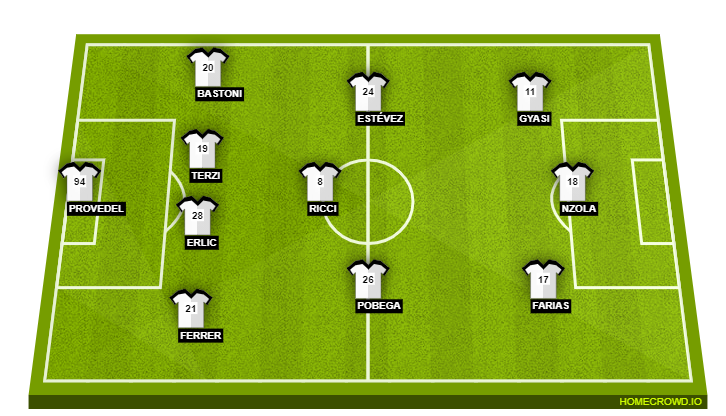 After a summer transfer window that was dominated by talks of a big move to Barcelona, Lautaro Martinez has not been able to start the 2020/21 season in the best of manners. Perhaps, the failed move has had his head turned, or maybe there is some other reason, but Martinez needs to start stepping up in the final third.

The Argentine international has only managed to find the back of the net five times in Serie A and has now failed to score in each of his last seven outings across all competitions. But, with Spezia struggling in recent times, they might be the perfect opponents for Martinez to find his mojo again. Either way, it is high time he delivers the goods, as Inter Milan look to heap pressure on AC Milan.

They might have suffered embarrassment in Europe. However, in Serie A, there has been very little stopping Inter Milan, even when they have not been at full flow. So, as things stand ahead of the game on Sunday, it seems highly unlikely that Spezia might be able to stop them in their tracks.

Granted, Spezia have been quite decent on their travels, but Inter Milan might be a hurdle too big for the minnows. To that end, The Hard Tackle is predicting a straightforward evening for the Nerazzurri, even if Antonio Conte fields a heavily rotated side. The Hard Tackle predicts Inter Milan to beat Spezia 2-0 on Sunday.