Chelsea will be desperate to bounce back to winning ways when they welcome West Ham United to Stamford Bridge on Monday.

The curtains will fall on Gameweek 14 of the 2020/21 Premier League season on Monday with a usually electric London derby. Chelsea play hosts to West Ham United at Stamford Bridge on Monday night, hoping to arrest their recent slide down the table.

Chelsea enjoyed a brilliant run for a couple of months after a sluggish start to their campaign this term. The Blues were on an absolute tear, embarking on a 14-match unbeaten run following their ouster from the Carabao Cup in September. All the positive momentum, though, has been snapped in the past week, with Frank Lampard & co. suffering back-to-back defeats in the Premier League.

West Ham United, on the other hand, have enjoyed a fine first third of the 2020/21 Premier League campaign, losing just four of their opening 13 games. Their recent run of results has been a tonic for their season, with just one defeat in their last six outings in the top-flight. David Moyes’s methods are evidently having a definitive impact and the Hammers seem to be headed in the right direction.

The corresponding fixture last season saw West Ham claim a shock 1-0 win over Chelsea, with Aaron Cresswell scoring the only goal of the game. Ahead of the latest meeting between the two sides, The Hard Tackle takes a closer look at the encounter.

Reece James could be set to miss out if he undergoes knee surgery. (Photo by Glyn Kirk/AFP via Getty Images)

Frank Lampard has received a major injury blow ahead of the visit of West Ham United, which will surely hamper his preparations for his side’s latest fixture. On Monday, the Chelsea manager could be bereft of the services of as many as three first-team players.

Reece James could reportedly miss out against West Ham, due to the possibility of a surgery on his troublesome right knee, meaning Lampard will be forced to make at least one change in the game. Apart from James, Hakim Ziyech and Callum Hudson-Odoi are major doubts, as they continue their recovery from their respective hamstring injuries.

If James does miss out, captain Cesar Azpilicueta will be back in the starting lineup, taking his place in the right-back slot. The rest of the starting lineup, though, could be unchanged, with Kurt Zouma pairing up with Thiago Silva at the heart of the Chelsea defence, while Ben Chilwell picks himself on the left flank. In goal, there is no looking past Edouard Mendy.

Up ahead in midfield, N’Golo Kante, who has been a rare positive performer amid a horrid run, will keep his place in the holding role, with Mason Mount a certainty as well. However, Kai Havertz, who has struggled to rediscover his top levels since recovering from the coronavirus. The German midfielder might be given some time off, with Mateo Kovacic likely to start in his stead.

Finally, in attack, the fact that Ziyech might not be fit enough to start means Timo Werner and Christian Pulisic are automatic selections for the wide berths. Olivier Giroud ought to keep hold of his spot as well, with Tammy Abraham having to suffice with a place on the bench again. 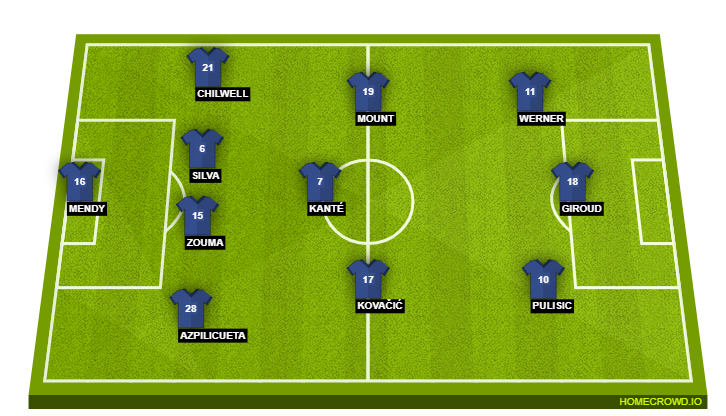 Like his counterpart in the Chelsea dugout, David Moyes is sweating over a fresh injury concern ahead of the short trip to Stamford Bridge. On Monday, the West Ham United manager might only have to make do without one first-team player, with Arthur Masuaku a long-term absentee after undergoing knee surgery.

Aaron Cresswell has been battling to shrug off a minor ankle injury, but is likely to be fit enough to start against Chelsea. Fabian Balbuena (ankle) and Michail Antonio (hamstring) have resumed training and will face late fitness tests to determine their availability. The duo, though, should make the West Ham bench on Monday.

Lukasz Fabianski is a certainty between the sticks for the visitors, with West Ham set to set up in a 4-2-3-1 formation against Chelsea. Vladimir Coufal has been a fantastic addition to the Hammers’ squad, with the Czech full-back being Cresswell’s equal on the right flank. Cresswell should line up on the left flank, with Issa Diop and Angelo Ogbonna forming the central defensive partnership.

Up ahead in midfield, there is no looking past Tomas Soucek and Declan Rice in the double pivot. Rice, who continues to be linked with Chelsea, will look to provide cover to the West Ham defence while also looking to push the visitors forward. Soucek, on the other hand, will aim to wreak havoc with his movement off the ball and will often be seen arriving late into the box.

Manuel Lanzini should start ahead of captain Mark Noble, reprising the no. 10 role, while Said Benrahma and Jarrod Bowen, who has been incredibly influential since his arrival in January, will be the two wide men. Finally, Sebastien Haller will lead the line for West Ham against Chelsea, with Antonio, who is celebrating signing a new deal with the club, being an impact substitute. 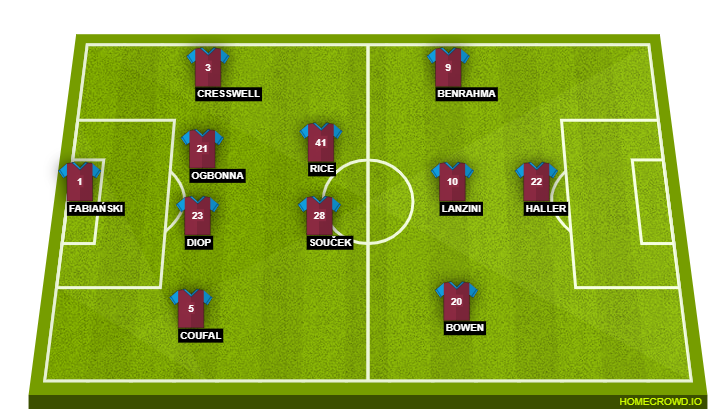 Azpilicueta will be eager to bounce back. (Photo by Laurence Griffiths/Getty Images)

It has been a difficult season for Azpilicueta, who has been well and truly usurped by Reece James for the first-choice right-back berth. As a result, the Chelsea captain has had to suffice with starts in Europe apart from the occasional appearance in the Premier League.

However, with James likely to be sidelined for the foreseeable future, the time is perfect for Azpilicueta to seize the opportunity and enjoy a stretched period in the side. A potentially tricky fixture against West Ham United is just the game for Azpilicueta to show that he can still offer a great deal to the Blues. Will the Chelsea captain deliver on Monday?

Chelsea’s awkward run continues with another potential banana skin fixture. West Ham United had the measure of the Blues last season and with Frank Lampard & co. slipping in the past week, the Hammers might just fancy their chances. However, the potential return of Hakim Ziyech could be the galvanizing factor Chelsea are in serious need of.

Ziyech’s possible appearance off the bench could make the difference for the west Londoners, who are set for another closely-contested affair. Michail Antonio will hope to make a lasting impact for West Ham as well, but with Christian Pulisic growing in stature this term, Chelsea might have enough to narrowly clinch this contest. The Hard Tackle, therefore, predicts a 2-1 win for Chelsea.