A place in the UEFA Champions League Round of 16 will be on the line when RB Leipzig welcome Manchester United to the Red Bull Arena in a Group H tie on Tuesday.

The curtains will fall on the UEFA Champions League group stage this week, with Matchday 6 set to begin on Tuesday. Eight matches are on show on the day, with the most intriguing of those being played at the Red Bull Arena, where RB Leipzig will play hosts to Manchester United in a do-or-die game for both teams.

RB Leipzig have not managed to hit the heights of their 2019/20 Champions League campaign thus far, having lost two of their five group games till now. However, Julian Nagelsmann & co. have largely looked the part in Bundesliga, where they are giving the mighty Bayern Munich a run for their money and come into this game on the back of a 3-3 draw with the Bavarians.

Manchester United, on the other hand, have managed to impress in the Champions League so far, having claimed two big wins in their opening two games of the campaign. However, the Red Devils have as many as points as PSG and Leipzig heading into the final matchday. Their recent domestic form, though, has been promising and Ole Gunnar Solskjaer’s men come into this game on the back of a 3-1 win over West Ham United.

The reverse fixture played at Old Trafford on Matchday 2, saw Manchester United cruise to a 5-0 win over RB Leipzig courtesy of a stunning second-half showing. Ahead of the latest meeting between the two sides, The Hard Tackle takes a closer look at the encounter.

Dayot Upamecano is one of six players missing for RB Leipzig against Manchester United. (Photo by Matthias Kern/Bongarts/Getty Images)

Julian Nagelsmann has several roster issues hampering his preparations ahead of the visit of Manchester United. On Tuesday, the RB Leipzig manager will be bereft of the services of five first-team players due to injuries, illness or suspension.

Lazar Samardzic is the latest player to become unavailable for Leipzig after testing positive for the coronavirus. Hee-chan Hwang, like Samardzic, misses out against Manchester United due to self-isolation as a result of a COVID-19 infection.

Meanwhile, the likes of Benjamin Henrichs, Lukas Klostermann and Konrad Laimer do not make the cut due to their respective knee injuries, while Dayot Upamecano is another major absentee due to a suspension. In Upamecano’s absence, Ibrahima Konate will likely be partnered by Willi Orban at the heart of the Leipzig defence.

Leipzig are expected to line up in an iteration of the 4-3-3 formation, with Nordi Mukiele and Angelino expected to be the two full-backs. The duo will provide the width in the final third as well, especially with front wide men Christopher Nkunku and Dani Olmo expected to veer infield at every given opportunity. In goal, there is no looking past Peter Gulacsi.

Up ahead in midfield, the onus will be on Marcel Sabitzer, who has coincidentally been linked with Manchester United lately, to drive Leipzig forward. Kevin Kampl will hope to keep things tight in the middle of the park, with Amadou Haidara likely to provide defensive support. Finally, Yussuf Poulsen will lead the line for Leipzig against Manchester United. 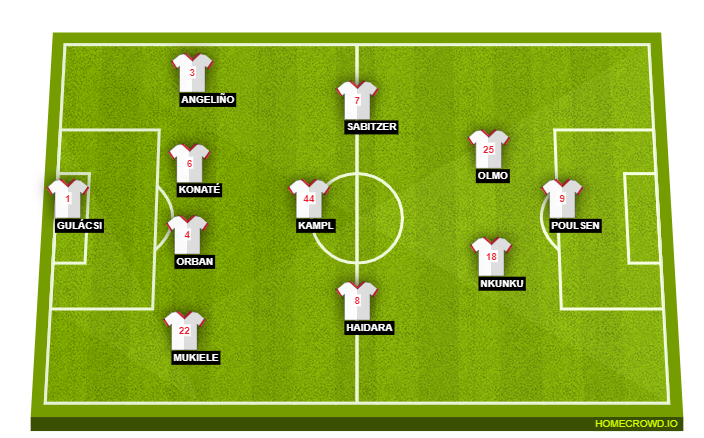 Like his counterpart in the RB Leipzig dugout, Ole Gunnar Solskjaer will have to make do without a few of his regulars when he takes his squad to the Red Bull Arena. On Tuesday, the Manchester United manager will be missing the services of three first-team players.

Fred, Anthony Martial and Edinson Cavani have all missed the trip to Leipzig. Fred is suspended after being sent off against PSG last time out, while Martial and Cavani are struggling with minor muscular injuries, which have ruled them out of the game. However, in some good news, David de Gea and Luke Shaw are a part of the Manchester United travelling squad.

The duo have shrugged off their injury problems and are in contention to feature against Leipzig. Also back at Solskjaer’s disposal in the Champions League is Axel Tuanzebe, who had missed out last week due to a suspension. The absence of Fred could force Solskjaer into a formation rethink and Manchester United might revert to the 3-4-1-2 system on Tuesday.

David de Gea ought to return between the sticks, with Tuanzebe, Victor Lindelof and captain Harry Maguire providing cover in front of him in the three-man central defensive unit. Aaron Wan-Bissaka and Alex Telles ought to be the two wing-backs, who will be in charge of providing width.

In midfield, Scott McTominay is a certainty in the absence of Fred and the Scottish international will have a lot of responsibility to contain Leipzig’s attacking moves. McTominay should have Donny van de Beek for company in the middle of the park, with Paul Pogba dropping to the bench.

Bruno Fernandes is a certainty to reprise the no. 10 role and the Portuguese playmaker will pull the strings for Manchester United higher up the pitch. Mason Greenwood and Marcus Rashford, who were both influential in the comeback win over West Ham United, pick themselves in the strike partnership for Manchester United in the absence of Martial and Cavani. 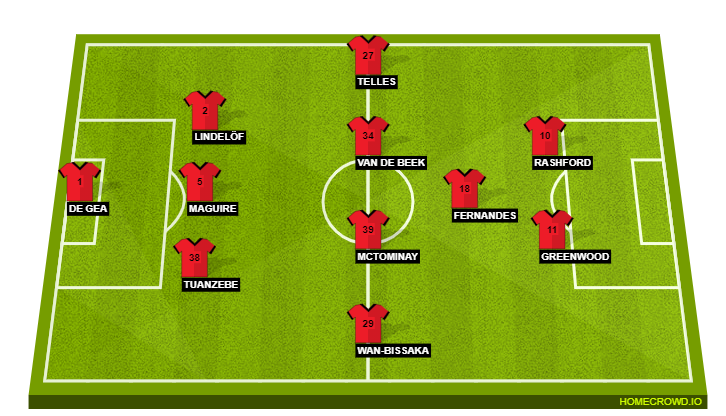 There are plenty of players who will be worth keeping an eye on in this game. From Bruno Fernandes and Marcus Rashford to Marcel Sabitzer and Christopher Nkunku. However, the most crucial player across two sides on the night will invariably be Scott McTominay.

With Fred suspended, Manchester United’s midfield stability will be at risk. McTominay will, thus, have a lot riding on his performance against Leipzig if the Red Devils are to remain in the UEFA Champions League. In particular, his duel with Marcel Sabitzer will hold the key on the night and it will be interesting to see who comes out on top in that battle. A big game for McTominay.

One of those gilt-edged encounters that can easily go either way. There will be absolutely no margin of error when RB Leipzig take on Manchester United in what is a winner takes all scenario, though Manchester United will proceed to the Round of 16 with a draw as well. Both sides will give it a right go on the night and the final result will hinge of the finest of margins in the end.

With Bruno Fernandes in a seemingly menacing mood after the blip against PSG last week, it is likely that the Portuguese international will make the difference on the night, with the absence of Dayot Upamecano also proving to be telling for Leipzig. That Manchester United reserve their best football for away games (they were dominant in defeat to PSG as well) also bodes well for them.

The returning David de Gea should make a few big saves to keep Manchester United in the game as well, with the Red Devils likely to eke out a narrow victory. The Hard Tackle, to that end, predicts a 3-2 win for Ole Gunnar Solskjaer & co. which sends them safely through to the knockout stages of the UEFA Champions League.