Liverpool will have the chance to climb to the top of the Premier League table when they welcome Wolves to Anfield on Sunday.

Gameweek 11 of the 2020/21 Premier League season continues on Sunday, with four matches on show. The action on the day will be culminated at the home of the defending champions, as Liverpool play hosts to Wolves at Anfield, which will have fans attending a football game for the first time since March.

Liverpool have been somewhat indifferent in the first three months of the new season, having won just six of their first 10 games in the Premier League. The Reds have been a little wobbly in the UEFA Champions League as well, but come into this game on the back of a 1-0 win over Ajax. In the league, however, Jurgen Klopp & co. last played out a 1-1 draw with Brighton & Hove Albion.

Wolverhampton Wanderers, on the other hand, have been typically solid so far, boasting the second-best defence in the Premier League more than a quarter of the way into the new term. As usual, a team that is hard to beat, Wolves come into this game on the back of a hard-fought 2-1 win over Arsenal at the Emirates in Gameweek 10.

The corresponding fixture last season saw Liverpool narrowly eke out a 1-0 win over Wolves, with Sadio Mane scoring the only goal of the game. Ahead of the latest meeting between the two sides, The Hard Tackle takes a closer look at the encounter.

Jurgen Klopp continues to have a plethora of injury concerns hampering his preparations ahead of the visit of Wolves. On Saturday, the Liverpool manager could be bereft of the services of as many as nine first-team players.

Trent Alexander-Arnold and Naby Keita, though, will be in contention to feature in some capacity after recovering from their respective hamstring issues. Having said that, Klopp could give Alexander-Arnold enough time to regain match fitness, especially at a time when games are coming thick and fast.

As a result, Neco Williams will once again be stationed on the right side of the Liverpool defence and will hope to build on a largely solid display against Ajax. On the opposite flank, Andrew Robertson is a certainty, with Joel Matip and Fabinho forming the central defensive partnership yet again.

In goal, Caoimhin Kelleher ought to deputise for Alisson once again, having been top-class last time out versus Ajax. In front of Kelleher, Liverpool should line up in a 4-2-3-1 formation against Wolves and as a result, Curtis Jones could drop out despite being phenomenal earlier this week. That means Jordan Henderson and Georginio Wijnaldum should form the double pivot for the Reds.

The change in formation essentially means that Mohamed Salah, Sadio Mane, Roberto Firmino and former Wolves forward Diogo Jota should all feature in attack for Liverpool. Salah will lead the line while Jota and Mane will be the two wide men, while Firmino will reprise the no. 10 role. 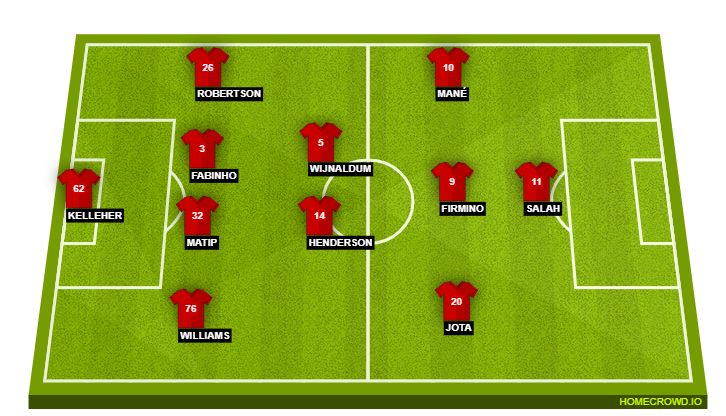 Unlike his counterpart in the Liverpool dugout, Nuno Espirito Santo is not bogged down by a spate of roster issues in his squad. On Saturday, the Wolves manager will only have to make do without a couple of first-team players and is, in fact, greeting the return of a regular.

The major absentee for Wolves is Raul Jimenez, who is recovering after surgery on his fractured skull, sustained at Arsenal last time out. Apart from Jimenez, Jonny Castro is the only other player who misses out against Liverpool, with Roman Saiss back at Nuno’s disposal after recovering from the coronavirus.

Saiss’s return could prompt Nuno to revert to his trusted 3-4-3 formation, but the recent success of the 4-2-3-1 formation could mean Saiss remains out, with Wolves set to line up in the same system. Rui Patricio will take his customary place in goal, with the four-man defensive line set to feature Nelson Semedo, Willy Boly, Conor Coady and Marcal once again.

Marcal will play as an auxiliary centre-back, staying deep to provide company to Coady and Boly. Up ahead in midfield, Leander Dendoncker and Joao Moutinho should retain their places in order to create a solid base for the attacking quartet. Moutinho, though, will also look to pull the strings during transitions.

As for attack, the key will be to fill the void of Jimenez. Here, Fabio Silva could get a chance to make an impression, having put in a solid display after replacing the Mexican striker against Arsenal. Behind him, the onus will be on Pedro Neto, Daniel Podence and Adama Traore to create the openings and engineer the chances for Wolves. 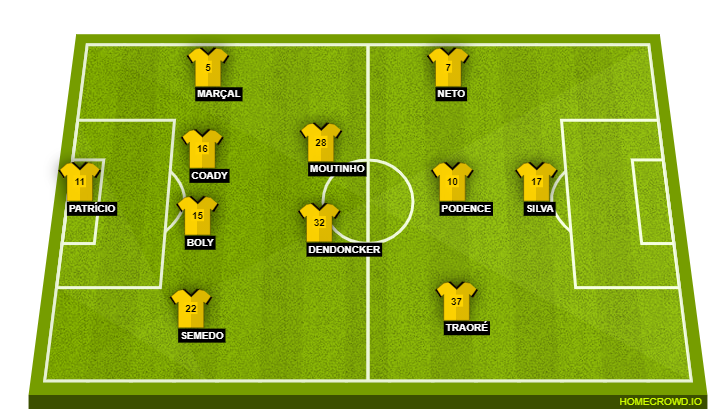 One of few players Liverpool signed in the summer transfer window, Jota has taken little time to get settled in at his new club. In 15 games for the Reds, the Portuguese international already has a return of 9 goals to show for his efforts. It is at Anfield in particular where Jota has shined brightly.

Jota has scored in each of his first four home games in the Premier League since joining Liverpool and is on the cusp of creating history. Jota could also join Stephen Hunt as the only player to score both for and against Wolves in the Premier League if he manages to find the back of the net on Sunday. A big game for the 24-year-old against his former side.

This is another one of those typical Wolves game that could be fiercely contested. Nuno Espirito Santo’s side are a difficult team to beat; there are no two ways about it. On Sunday, they should give Liverpool a run for their money, with the 4-2-3-1 formation bringing the best out of their attack.

However, Liverpool just do not lose at Anfield in the Premier League and seldom do their home games end in a stalemate. Mohamed Salah and Sadio Mane will be desperate to make the difference after being somewhat sub-par lately, while Diogo Jota will be raring to make a mark against former side Wolves.

Expect the game to be a closely-contested affair, albeit with Liverpool yet again doing enough to get all three points at Anfield. With Tottenham Hotspur also facing a tricky test in the north London derby against Arsenal, the Premier League summit could be there for the taking. The hosts should get the job done, though, with the return of the fans spurring them on. The Hard Tackle predicts a 3-1 win for Jurgen Klopp & co.