Top spot in Group E of the UEFA Champions League will be up for grabs when Sevilla welcome Chelsea to the Ramon Sanchez Pizjuan Stadium on Wednesday.

The curtains will fall on Matchday 5 of the 2020/21 UEFA Champions League group stages on Wednesday, with several intriguing match-ups on show. One such fixture will see Chelsea and Sevilla vie for the top spot in Group E when they lock horns at the Ramon Sanchez Pizjuan Stadium.

Sevilla and Chelsea have a near-identical record in the UEFA Champions League this season so far, with both teams winning three of their first four games (D1 each) to book their places in the Round of 16. The only thing separating the two sides is goal difference, with Chelsea slightly ahead of their Spanish counterparts on that account.

In domestic football, Chelsea seem to have made a slightly better start to the season, as they find themselves in the thick of the Premier League title race. Sevilla, on the other hand, are 8 points adrift of the leaders, Real Sociedad, in La Liga, albeit with a couple of games in hand.

The reverse fixture, played at Stamford Bridge on Matchday 1 back in October, saw Chelsea play out a goalless stalemate with Sevilla. Ahead of the latest meeting between the two sides, The Hard Tackle takes a closer look at the Champions League encounter.

🗣️ Julen Lopetegui ahead of tomorrow's match against @ChelseaFC: 'To finish first in the group we'll have to beat a team who could win the @ChampionsLeague.'#WeareSevilla #UCL

Julen Lopetegui has a number of pressing roster issues hampering his preparations ahead of the visit of Chelsea. On Wednesday, the Sevilla manager could be missing as many as five first-team players.

While Bono and Carlos Fernandez are self-isolating after testing positive for the coronavirus, the likes of Marcos Acuna and Suso are recovering from their respective muscular injuries. Finally, Lopetegui is also sweating over the fitness of Sergio Escudero, who is struggling with an elbow injury.

With Escudero likely to miss out, Karim Rekik is expected to continue on the left side of the Sevilla defence, with Jesus Navas a certainty on the right flank. Jules Kounde and Diego Carlos are also automatic picks, with the duo forming the central defensive partnership. In goal, Tomas Vaclik will continue to deputise for the unavailable Bono.

Sevilla will line up in a 4-3-3 formation and in midfield, Ivan Rakitic will be the key man for the hosts in order to provide the forward thrust. Rakitic will be backed up by Joan Jordan and Fernando, who will aim to keep things tight in the middle of the park.

Up ahead in attack, Lopetegui is admittedly sweating over the fitness of Lucas Ocampos and Luuk de Jong. The duo were missing from training on Tuesday and the Sevilla boss will take a late call on their availability on Wednesday. Neither player might be risked, with Youssef En-Nesyri and Franco Vazquez starting in their stead, while Munir El Haddadi picks himself on the left-wing. 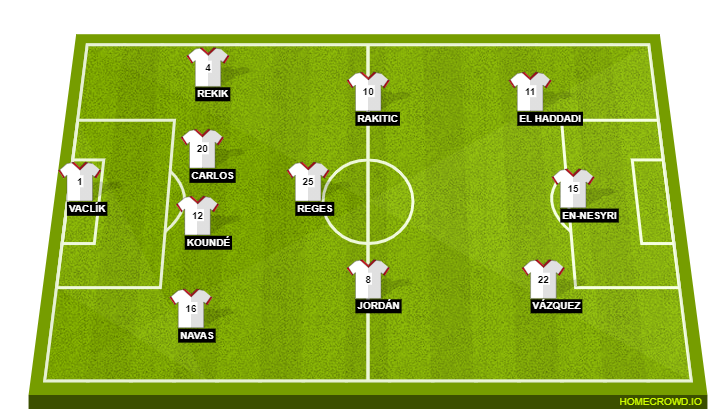 Unlike his counterpart in the Sevilla dugout, Frank Lampard has a fully fit squad at his disposal ahead of the visit to the Ramon Sanchez Pizjuan Stadium. The latest Chelsea player to make himself available for selection is Billy Gilmour, who has completed his recovery from a knee injury and has been included in the travelling squad.

Gilmour, though, is likely to be eased into a regular role after returning from a long-term injury and is only likely to make an appearance off the bench on Wednesday. The Chelsea midfield should, therefore, feature vice-captain Jorginho, who should have Mateo Kovacic for company in the double pivot, meaning N’Golo Kante will be given a breather.

Lampard will slightly alter the shape of the side against Sevilla, with the return of Kai Havertz, prompting him to revert to the 4-2-3-1. Havertz will indeed reprise the no. 10 role, with Christian Pulisic also likely to return, on the left flank.

Callum Hudson-Odoi will get his opportunity to impress on the right-wing, with Olivier Giroud, whose future at Chelsea remains up in the air, leading the line against Sevilla. At the back, meanwhile, there are likely to be a number of changes made by Lampard.

Thiago Silva could be rested, as he so often has been this season in midweek games, with Antonio Rudiger getting another opportunity to impress alongside Kurt Zouma. Chelsea captain Cesar Azpilicueta will also return and so should Emerson Palmieri, to provide Ben Chilwell a rest. In goal, though, Edouard Mendy should keep his place ahead of Kepa Arrizabalaga.

Christian Pulisic will be eager to make an impact against Sevilla. (Photo by Catherine Ivill/Getty Images)

It has been a frustrating season so far for Christian Pulisic, who has had absolutely no chance to build momentum in the first couple of months of 2020/21. However, the USMNT winger is now fit and available; and he will be raring to go after making full recovery from his latest injury.

With games set to come thick and fast this month, Pulisic will need to maintain his levels, if Chelsea are to continue their fine run of form and if he is to be a key player in the festive period. That starts with the game against Sevilla on Wednesday when the top spot in Group E will be up for grabs. Will Pulisic deliver the goods at the Ramon Sanchez Pizjuan Stadium?

This is one of those games that can easily go either way. A lot will also depend on the team selected by the two managers and whether Julen Lopetegui is able to call upon Lucas Ocampos and Luuk de Jong. Frank Lampard, on the other hand, should rotate his troops, although he will still be naming a pretty strong lineup.

Christian Pulisic and Kai Havertz will hold the key for Chelsea after making their returns this past weekend and the duo should make a positive impact. In the end, though, the final result should be derived by fine margins, and the strength of the Chelsea bench should pull them through. The Hard Tackle, therefore, predicts a 2-1 win for Frank Lampard & co. which sees them top Group E.