Borussia Monchengladbach will take on Inter Milan on Tuesday, in what will be a must-win game for the visitors to keep their Champions League hopes alive.

The UEFA Champions League resumes this midweek with Matchday 5 of the 2020/21 season’s group stages. In a wide-open Group B, leaders Borussia Monchengladbach will play hosts to Inter Milan at Borussia-Park on Tuesday night, having the chance to book their place in the Round of 16, while the Nerazzurri are battling to keep their campaign alive.

For Borussia Monchengladbach, 2020/21 has been a tale of two different competitions. Die Fohlen have managed to win just four of their first nine games in the Bundesliga to sit 7th on the table. However, in the Champions League, an unbeaten start to the campaign has seen Gladbach take the lead in Group B, ahead of bigger names like Real Madrid and Inter Milan.

Inter Milan, on the other hand, are rock-bottom in their group in Europe, having managed just 2 points from their four Champions League games so far. The Nerazzurri have fared better in Serie A, however, managing to climb up to second in the standings, where they are behind leaders AC Milan by five points.

The reverse fixture, played on Matchday 1 at San Siro in October, ended in a 2-2 draw, with Romelu Lukaku scoring a point-saving brace for Inter Milan, while Ramy Bensebaini and Jonas Hofmann had found the net for Gladbach. Ahead of the latest meeting between the two sides, The Hard Tackle takes a closer look at the encounter.

Denis Zakaria (L) could drop to the bench while Nico Elvedi (R) misses out due to a muscle injury. (Photo by Christof Koepsel/Bongarts/Getty Images)

Marco Rose has a fresh injury concern hampering his preparations ahead of the visit of Inter Milan. On Tuesday, the Borussia Monchengladbach manager will be bereft of the services of two first-team players.

The Gladbach boss confirmed during his pre-match press conference that Nico Elvedi has picked up a muscle injury in training and misses out. Apart from him, the only other player who will be unavailable to take on Inter is Jonas Hofmann, who is recovering from a thigh injury.

Gladbach will line up in their usual 4-2-3-1 formation against Inter Milan, with Yann Sommer taking his customary place in goal. As far as defence is concerned, Tony Jantschke is a certainty in the absence of Elvedi and he is set to be Matthias Ginter’s central defensive partner. Stefan Lainer and Oscar Wendt ought to be the two full-backs for the hosts.

Up ahead in midfield, Florian Neuhaus should have a new partner in Christoph Kramer, with Rose likely to continue to manage the fitness of Denis Zakaria following his return from a long-term injury. Captain Lars Stindl will also return to the starting lineup and will be deployed in the advanced midfield role, given the free role as the no. 10.

The onus, though, will invariably be on Marcus Thuram and Alassane Plea, with the star attacking duo holding the key for Gladbach with their fine movement and pacy outlet. Valentino Lazaro, on loan from Inter, will likely occupy the right-wing slot ahead of Breel Embolo and will hope to make an impression against his parent club. 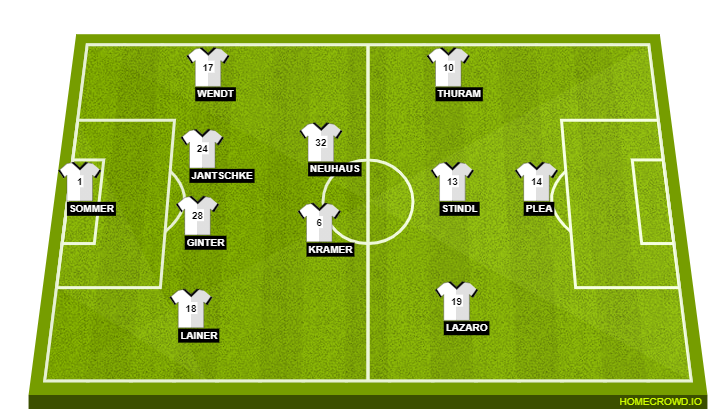 Like his counterpart in the Borussia Monchelgadbach dugout, Antonio Conte has a few pressing issues to contend with ahead of his side’s latest fixture. On Tuesday, the Inter Milan manager could have to make do without as many as five first-team players.

The major absentees for Inter Milan come in midfield, with Arturo Vidal suspended after being sent off against Real Madrid last week, while Marcelo Brozovic’s participation remains a doubt. Apart from the aforementioned duo, Conte is also sweating over the fitness of Aleksandar Kolarov, Andrea Pinamonti and Radja Nainggolan.

Inter captain Samir Handanovic is an automatic pick between the sticks for the visitors, who will line up in a 3-5-2 formation in front of the goalkeeper. Stefan de Vrij and Alessandro Bastoni are expected to pick themselves in the three-man central defensive unit. The third spot should be given to Andrea Ranocchia, who pips Milan Skriniar and Danilo D’Ambrosio to the position.

Up ahead in midfield, Conte is extremely light on options; and with Christian Eriksen highly unlikely to receive a start, Stefano Sensi becomes an automatic pick alongside Nicolo Barella and Roberto Gagliardini in the middle of the park. Gagliardini will sit deeper in midfield, to provide cover to the backline, while Barella and Sensi will move higher up the pitch to pull the strings.

Achraf Hakimi and Ashley Young ought to be the wing-back duo for Inter, although Matteo Darmian will be pushing for inclusion following a solid effort against Sassuolo this past weekend. Finally, the strike partnership will feature Romelu Lukaku and Lautaro Martinez, with Alexis Sanchez expected to feature off the bench. 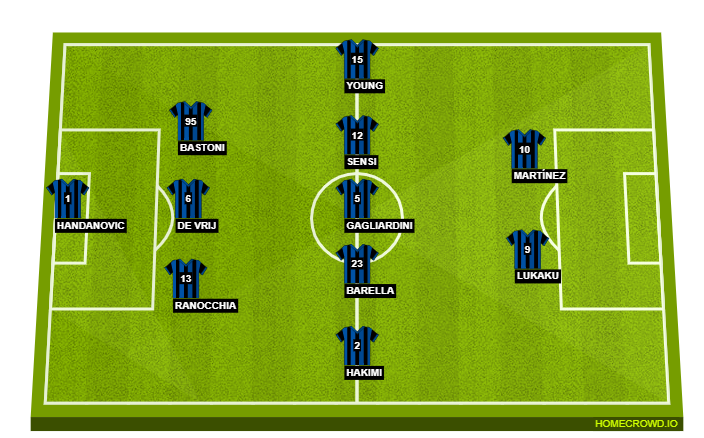 Ever since joining Inter Milan from Manchester United last year, Lukaku has been the go-to man for the Italian outfit. His big-game record has improved considerably as well at San Siro, and the Belgian striker is by far the most important player in Antonio Conte’s squad.

So, it goes without saying that Lukaku will need to be on the money if Inter are to keep their status in the Champions League intact heading into the final matchday of the group stages. Lukaku has so far revelled in European settings for the Nerazzurri and with the pressure growing on Antonio Conte, the time is now for him to deliver.

This is one of those games that could really go either way. Borussia Monchengladbach, for all their attacking talent, have a vulnerable backline that will keep their visitors in play all throughout. Inter Milan, on the other hand, were highly unimpressive as a unit against Real Madrid last time out but will be eager to produce a response with their backs against the wall.

The key difference maker then becomes the Nerazzurri’s ability to remain tight at the back and deny Gladbach much space. However, the sheer pace of their attack could catch Antonio Conte & co. unaware and so, this looks like it might as well end in a stalemate.

To that end, The Hard Tackle predicts a 2-2 draw, but this really could go either way on Tuesday, and it will be interesting to see how this result plays out for either side as it follows immediately after the game between Shakhtar Donetsk and Real Madrid.