A place in the UEFA Nations League Finals will be on the line when Belgium welcome Denmark to the King Power Stadion on Wednesday.

Just one final game remains for each team before the curtains fall on the round-robin stage of the UEFA Nations League this week. Just one team has booked their place in the Finals, which means there is still a lot to play for and the last of those spots will be sealed on Wednesday night when Belgium play hosts to Denmark at the King Power Stadion.

Belgium have largely been solid customers in the second edition of the UEFA Nations League, although they have had to work hard to scale the summit of Group A2. The Red Devils are sitting atop the standings as things stand following a gritty 2-0 win over England this past weekend. Roberto Martinez & co. now need just a draw to book their place in the Finals.

Denmark, on the other hand, closely follow Belgium in the Group A2 table, with 10 points from five games till now. Kasper Hjulmand’s men have had a roller-coaster of a ride in the Nations League this time around and come into this match on the back of a hard-fought 2-1 win over Iceland, which took them over England in the table.

The reverse fixture, played in Copenhagen on Matchday 1, ended in a 2-0 win for Belgium courtesy goals from Jason Denayer and Dries Mertens, with Denmark managing just one shot on target. Ahead of the latest meeting between the two sides, The Hard Tackle takes a closer look at the encounter.

Roberto Martinez has a couple of fresh roster issues to contend with ahead of the visit of Denmark. On Wednesday, the Belgium head coach will be bereft of the services of two key first-team players, with Thomas Meunier and Axel Witsel suspended due to accumulation of yellow cards.

Meanwhile, Simon Mignolet has been released from the squad to provide him with some rest. The absence of Meunier and Witsel, though, means that Martinez will be forced into a couple of changes against Denmark.

In Meunier’s stead, Nacer Chadli could reprise the right wing-back role, with Thorgan Hazard starting on the left flank once again. Meanwhile, in midfield, Dennis Praet should come in for Witsel, especially with Leander Dendoncker struggling with an injury. Praet will provide company to Leicester City teammate Youri Tielemans in the middle of the park.

Up ahead in attack, there is no looking past Dries Mertens, Romelu Lukaku and Kevin De Bruyne. At the back, Toby Alderweireld, Jan Vertonghen and Jason Denayer pick themselves, with Thibaut Courtois an automatic selection in goal. 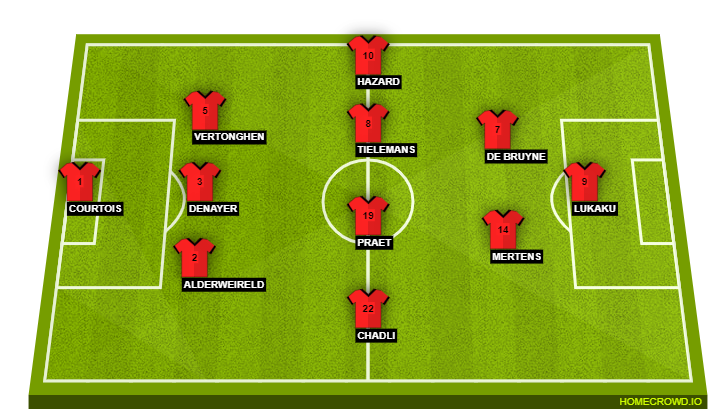 Kasper Hjulmand has a fresh injury concern hampering his preparations ahead of the trip to Leuven. Against Belgium on Wednesday, the Denmark head coach is likely to have to make do without Kasper Schmeichel, who endured a nasty head injury in the 2-1 win over Iceland.

While the Denmark vice-captain has not been ruled out of the game against Belgium yet, it is likely that Frederik Ronnow will replace him between the sticks. In front of Ronnow, Denmark will line up in a 3-4-1-2 formation that will mirror Belgium’s system to a great extent.

Andreas Christensen, Jannik Vestergaard and Simon Kjaer are expected to form the three-man central defensive partnership, with the trio looking to remain compact and kill off the half-spaces in their defensive third. In front of them, Thomas Delaney and Pierre-Emile Hojbjerg will aim to keep things tight in the middle of the park, denying Kevin De Bruyne space to pull the strings.

Daniel Wass and Jens Stryger Larsen will likely be the two wing-backs, with the duo providing a constant outlet down their respective flanks. Christian Eriksen will invariably be the creator-in-chief for Denmark, with Martin Braithwaite and Yussuf Poulsen forming the strike partnership against Belgium. 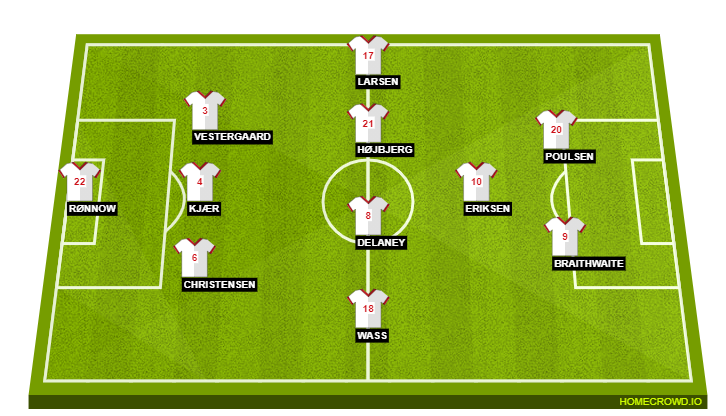 Will Eriksen deliver the goods for Denmark? (Photo by Laurence Griffiths/Getty Images)

Things have not quite looked positive for Christian Eriksen lately. The Danish playmaker was set for a new phase in his career 10 months ago when he joined Inter Milan but now finds himself staring at a possible winter exit less than a year after leaving Tottenham. In Denmark colours, though, a complete 180 happens for Eriksen.

The single most important player for Denmark, Eriksen tends to prove his doubters wrong more often than not. The 28-year-old was on the money against Iceland as well, scoring each of the goals for Denmark and will need to deliver once again if the visitors are to get past Belgium this week. A big game for Eriksen.

This is a match between two sides that do not give an inch at the back. So, one can expect very little goalmouth action in this tie, which should go right down the wire. Denmark tend to be late scorers, though, and a late winner could be on the cards. However, as things stand, it looks like Belgium will not be separated from their visitors and we predict a 1-1 draw in Leuven on Wednesday.