Croatia will be desperate to avoid from the UEFA Nations League A when they welcome Portugal to Stadion Poljud on Tuesday.

The curtains are set to drop on the round robin stage of the second edition of the UEFA Nations League this week with Matchday 6. The decisive action in Group A3 will take place in Split, as Croatia play hosts to Portugal at Stadion Poljud, hoping to keep their top-flight status intact.

Croatia have not enjoyed the best of forms in 2020, managing to win just two of their seven games this year. Only one of those victories have come in the UEFA Nations League, which means Vatreni do not have any room for error on the final matchday, seeing as they sit level on points with Sweden on three points at the bottom of Group A3 following their defeat on Matchday 5.

For Portugal, on the other hand, the game on Tuesday will be a dead rubber after being narrowly beaten by France 1-0 last weekend. The defeat means that the Nations League holders cannot top their group even if France lose to Sweden due to an inferior head-to-head record and the Seleccao cannot finish any lower than second either.

The reverse fixture, played on Matchday 1 at Estadio do Dragao back in September, saw Portugal hand Croatia a crushing 4-1 defeat. Ahead of the latest meeting between the two sides, The Hard Tackle takes a closer look at the Nations League encounter.

Dejan Lovren is available after serving his suspension. (Photo by Richard Heathcote/Getty Images)

Zlatko Dalic has already had his preparations hampered in the latest international break due to COVID-19 scares. The most notable of these saw Domagoj Vida play the friendly against Turkey with the coronavirus infection while Marcelo Brozovic is sidelined for Croatia as well.

The latest player to be rendered unavailable is Duje Caleta-Car, who misses out against Portugal due to a suspension. However, the good news is that Dejan Lovren is at Dalic’s disposal again after serving a ban of his own. Lovren should be reinstated in the backline straightaway, with Marin Pongracic being his partner at the heart of Croatia’s defence.

Out wide, Josip Juranovic and Borna Barisic ought to form the full-back pairing, with Dominik Livakovic likely to be stationed in goal. Midfield will hold the key for Croatia against Portugal and it will be up to Luka Modric and Mateo Kovacic to assert the hosts’ dominance in the game from the middle of the park.

Nikola Vlasic will be the advanced midfielder, looking to take up position in and around the Portugal box. Ivan Perisic will also be a key player for Croatia with his forays down the left flank, while Josip Brekalo and Ante Budimir will complete the attacking unit. 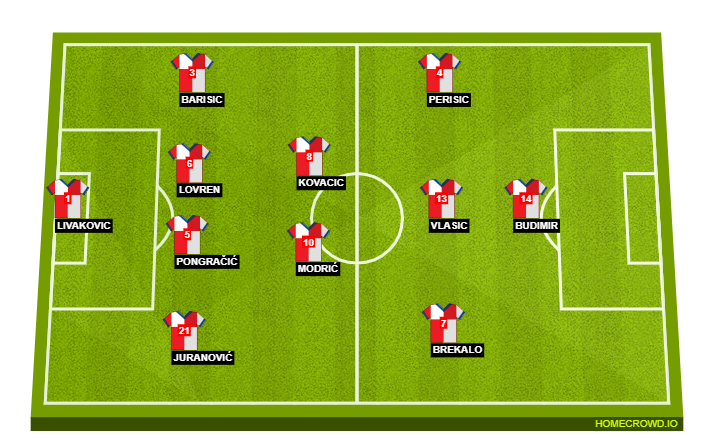 Like his counterpart in the Croatia dugout, Fernando Santos has a few pressing issues to contend with ahead of his side’s latest. Ahead of their final UEFA Nations League group game, the Portugal head coach has lost the services of Raphael Guerreiro, who pulls out due to a minor injury.

However, with Portugal expected to line up in a heavily rotated side anyway, the absence of Guerreiro does not hamper Santos’s preparations. In place of the 26-year-old, Mario Rui is expected to start as the visitors’ left-back, with Nelson Semedo likely to come in on the right flank.

Ruben Dias, who has positively impacted Manchester City’s defence, should start at the heart of Portugal’s backline, with Domingos Duarte likely to be named as his partner. Anthony Lopes will get another chance to impress in goal, with Rui Patricio set to be rested.

Up ahead in midfield, Ruben Neves is set to start for the first time in the latest international break, with Joao Moutinho returning in midfield as well. Moutinho and Neves will shore up the defensive side of things while hoping to win the midfield battle against Luka Modric and Mateo Kovacic. The third man in midfield will be Bruno Fernandes, who provides the creative impetus for Portugal.

Finally, the attack will have an entirely new look, with Paulinho starting for the second time in Portugal colours after an impressive debut last week. Diogo Jota, who is yet to start a game in the latest international break, should come in on the left wing, with Francisco Trincao starting on the right flank. 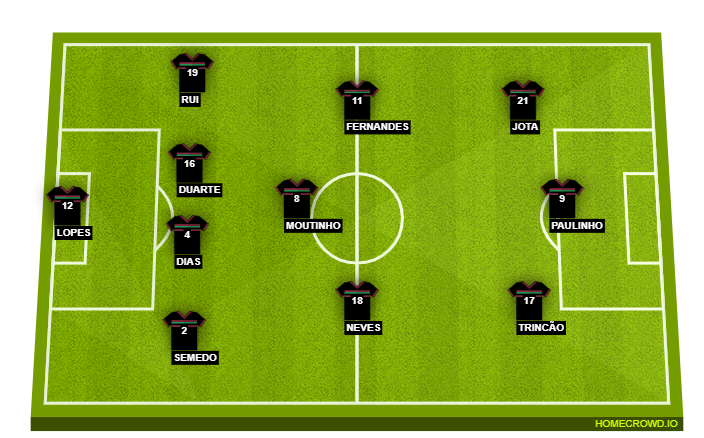 Will Modric make the difference for Croatia against Portugal? (Photo by Matthias Hangst/Getty Images)

Croatia have not managed to impose themselves in midfield as much as they would have liked in recent game. However, against Portugal, that will have to change, especially if they are to hold on to their place in the UEFA Nations League top-flight. That is where Luka Modric comes in.

The Croatia captain has been in brilliant touch for Real Madrid since June and will need to mirror his domineering displays at international level as well. If he does manage to perform at his best, Modric could well help keep Croatia’s status in League A intact at the expense of Sweden.

Portugal have nothing to play after being beaten by France in the previous game and should field a largely second-string side. Croatia, on the other hand, have a lot to lose and should play like it. The Seleccao do tend to play well despite the absence of Cristiano Ronaldo and the levels should not drop a great deal.

In addition, with Croatia desperate to grab all three points, Portugal could well exploit some open spaces in the final third. Having said that, Croatia should get ample opportunities as well and all signs point towards a stalemate. The Hard Tackle predicts a 2-2 draw in Split, meaning Croatia’s fate rests on the result in the game between France and Sweden on the same night.