Netherlands will welcome Spain to the Johan Cruijff Arena for a friendly on Wednesday, with both sides looking to bounce back to winning ways.

Club football is on a break for a couple of weeks, with the return of international games. The games are set to come thick and fast with teams playing thrice in a span of just 10 days and the big game this week will see Netherlands play hosts to Spain at the Johan Cruijff Arena on Wednesday night.

Netherlands are in a state of transition following the appointment of Ronald Koeman as the new Barcelona manager. In his stead, Frank de Boer has arrived at the helm of the Oranje but has been slow to settle into his new project. Three games into his stint as the Netherlands head coach and de Boer is still in search of his first win, with the Dutch losing once and drawing two matches.

Spain, on the other hand, have found stable footing under the tutelage of Luis Enrique. La Roja coasted through their qualifying group for the European Championship, but have blown a bit hot and cold in the latest edition of the Nations League. Spain indeed come into this game on the back of a shock 1-0 loss to Ukraine and will be eager to get the winning feeling back.

Netherlands and Spain last locked horns way back in 2015, with the Dutch cruising to a 2-0 win on the back of early goals by Stefan de Vrij and Davy Klaassen. Ahead of the latest meeting between the two sides, The Hard Tackle takes a closer look at the encounter.

Virgil van Dijk is unavailable for Netherlands due to a long-term injury. (Photo by Maja Hitij/Bongarts/Getty Images)

Frank de Boer has not made too many alterations to the squad he picked for last month’s international break. The major absentees for Netherlands comprise the forced changes, with Virgil van Dijk, Matthijs de Ligt and Jasper Cillessen all on the sidelines due to their respective injuries.

Netherlands are, therefore, set to have a fresh look at the back, with Tim Krul expected to deputise for Cillessen between the sticks. In front of Krul, the hosts should revert to the 4-2-3-1 formation after using a 3-5-2 last time out against Italy.

Stefan de Vrij and Nathan Ake should form the central defensive partnership for Netherlands, with Daley Blind and Hans Hateboer likely to be the full-back pairing. Frenkie de Jong and the returning Davy Klaassen ought to partner up in the double pivot, with Georginio Wijnaldum reprising the no. 10 role, as he so often does for the Dutch national side.

In attack, Mohamed Ihattaren would have hoped to make his debut this week before pulling out. The onus, though, will invariably be on Memphis Depay to provide the fireworks, especially with Netherlands desperate to get back to winning ways. Depay will be supported from the flanks by Ryan Babel and Quincy Promes. 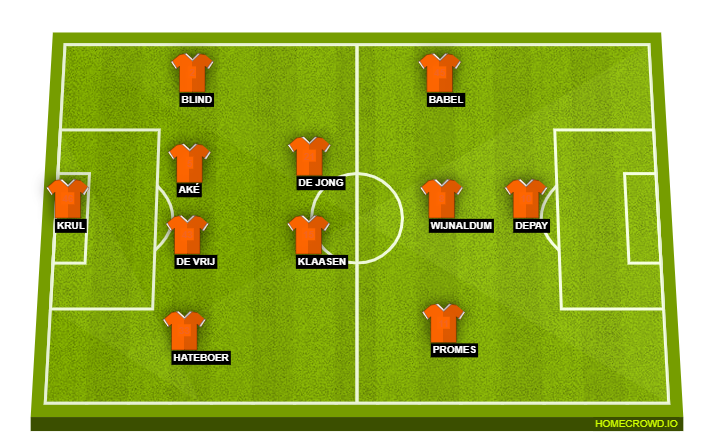 Like his counterpart in the Netherlands dugout, Luis Enrique will be bereft of the services of a few key and promising players for the latest international break. Jesus Navas has withdrawn from the Spain squad due to an injury while Thiago Alcantara was already out of contention due to his own fitness issues.

Another major absentee for Spain is Ansu Fati, who is sidelined for the next four months after sustaining a knee injury. The teenage prodigy was just starting to establish a foothold in the Spanish national side and his injury is a huge blow to the player, Barcelona and Spain.

Marco Asensio has been called up to replace Fati, but might have to suffice with a place on the bench, with Ferran Torres and Mikel Oyarzabal likely to start as the two wide men. The duo will flank Alvaro Morata, who is back in the Spain squad and will hope to continue his run of form.

In the middle of the park, Rodri could get the nod ahead of Sergio Busquets, who has not quite been in the best of forms lately. Koke and Fabian Ruiz are likely to provide company to the Manchester City star in the three-man unit, with Marcos Llorente expected to get his debut in the game as well.

As for defence, Hector Bellerin has replaced Jesus Navas in the Spain squad but might have to make do with a place on the bench, with Sergi Roberto starting as the right-back. On the opposite flank, Sergio Reguilon should get a chance to impress, with Sergio Ramos and Inigo Martinez forming the central defensive partnership. In goal, David de Gea should get the nod. 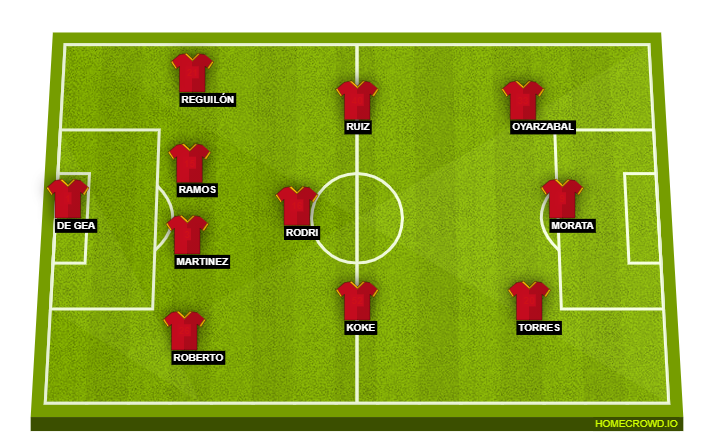 Will Morata (C) impress on his return? (Photo by Oscar del Pozo/AFP via Getty Images)

The last few years have been quite strange for Alvaro Morata. Since his move to Chelsea, the 28-year-old has blown hot and cold, which has been the case for him in Spain colours. However, the return to Juventus seems to be working well for the striker, who is slowly finding his groove again.

Having shown some decent touch in the past month or so, Morata has earned a place back in the Spain squad and will be raring to make an impression. Against a Netherlands side that has been a bit unsettled under Frank de Boer, Morata will fancy his chances, especially with the hosts missing their first-choice centre-backs and goalkeeper. A big game for the Juventus star.

This one is a game that could be quite a closely-contested affair. Netherlands are in search of an inspiration and might be missing that once again on Wednesday. Spain, on the other hand, look like they do not have a lot of goals in them, although Alvaro Morata can be expected to make an impression. In the end, there might be very little to separate them and we are predicting a 1-1 draw.