PSG will hope to consolidate their place atop the Ligue 1 table when they welcome Rennes to Parc des Princes on Saturday.

Club football is set to come to a halt for a couple of weeks, with the dreaded international break upon us again. Before then, Matchday 10 of the 2020/21 Ligue 1 season is set to be played, with champions PSG in action on Saturday, when they will be playing hosts to Rennes at Parc des Princes.

PSG, coming into 2020/21 on the back of their loss in the UEFA Champions League final in August, made a woeful start to the current campaign, losing their opening two Ligue 1 games. Les Parisiens, though, have since won each of their subsequent seven league games, although they have struggled in Europe and head into this weekend on the back of a 2-1 defeat to RB Leipzig.

Rennes, on the other hand, have made a solid start to the season, losing just one of their first nine Ligue 1 matches, although that defeat came a couple of weeks ago. Things have not been quite rosy in the Champions League, as Les Rouge et Noir are still in search of their first win in Europe, with their latest defeat coming in the form of a 3-0 humbling at the hands of Chelsea.

PSG were beaten the last time they locked horns with Rennes, who came from a goal down to beat them 2-1 back in August last year. Ahead of the latest meeting between the two sides, The Hard Tackle takes a closer look at the encounter.

Unfortunately for PSG, both Neymar and Kylian Mbappe are unavailable. (Photo by Franck Fife/AFP/Getty Images)

Thomas Tuchel has a lengthening injury list severely hampering his preparations ahead of the visit of Rennes. On Saturday, the PSG manager is set to be bereft of the services of as many as eight first-team players due to various fitness issues, while Alexandre Letellier is missing due to his recovery from the coronavirus.

Just about every department in Tuchel’s squad is down to the bare bones, with Keylor Navas and Presnel Kimpembe joining the likes of Juan Bernat, Marco Verratti, Julian Draxler, Neymar, Mauro Icardi and Kylian Mbappe on the sidelines. Meanwhile, Pablo Sarabia’s availability is touch and go as he recovers from a muscle strain.

Tuchel has further been left feeling helpless after Neymar and Mbappe received call-ups to the Brazilian and French national squads, respectively. As for matters at hand, most of Tuchel’s team selection decisions are forced due to the injury crisis he has at his hands.

Sergio Rico will take his place between the sticks, with PSG lining up in a 4-3-3 formation in front of him. Mitchel Bakker will come into the side in place of Layvin Kurzawa to take over the left-back slot, with Alessandro Florenzi a certainty on the right flank. Marquinhos and Abdou Diallo ought to form the central defensive pairing against Rennes.

Up ahead in midfield, Marquinhos moving to the defence should open up a spot, with Leandro Paredes returning to the starting lineup. Paredes will likely have Ander Herrera and Idrissa Gueye for company in the three-man unit in the middle of the park. Finally, in attack, Moise Kean and Angel Di Maria pick themselves, while Rafinha could start on the left flank if Sarabia is unavailable.

Unlike his counterpart in the PSG dugout, Julien Stephan is only missing a few players due to injuries and other issues ahead of his side’s visit to the capital. At Parc des Princes on Saturday, the Rennes manager will still have to make do without five first-team players.

The major absentee for Rennes is star midfielder Eduardo Camavinga, who will only be available post the international break. Apart from Camavinga, the visitors are also travelling to Paris without Daniele Rugani, Faitout Maouassa, Flavien Tait and Mbaye Niang.

Alfred Gomis will likely be stationed between the sticks and in front of him, Rennes are expected to line up in a 4-3-3 formation that will mirror PSG’s system. Captain Damien Da Silva is a certainty at the heart of the Rennes defence, where he will be partnered by Nayeg Aguerd. Hamari Traore and Dalbert will be the full-back pairing for the visitors.

Up ahead in midfield, the onus will be on Steven Nzonzi to keep the side organised around him in order to curb the output of danger man Angel Di Maria. Nzonzi will likely have Clement Grenier and Benjamin Bourigeaud for company in the middle of the park, with James Lea Siliki being an option off the bench.

The Rennes attack will fancy their chances against a depleted PSG defence, with striker Serhou Guirassy expected to carry a significant threat through the middle. Guirassy will be supported by Jeremy Doku and Martin Terrier, with Romain Del Castillo and Yann Gboho being backup options. 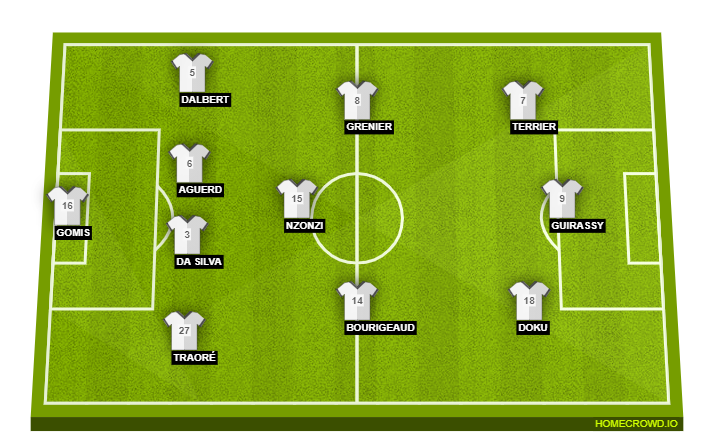 PSG will need Angel Di Maria to be at his best against Rennes. (Photo by FRANCK FIFE / AFP)

With Neymar and Kylian Mbappe both ruled out for yet another game, all eyes will invariably be on Angel Di Maria. In fact, the PSG fans will likely have most of their hopes pinned on the Argentine to find the back of the net against Rennes, as he did versus RB Leipzig in the UEFA Champions League this week.

This time around, though, the expectation from Di Maria would be for him to take a step forward and inspire PSG to grab all three points against Rennes. The visitors are not to be taken lightly and it will take everything from Di Maria to get past a resolute Rennes side.

PSG are in all sorts of trouble at the moment, even if they are managing to win game after game in Ligue 1. The injury crisis just continues to worsen, with Thomas Tuchel missing several key players once again. This gives Rennes an opportunity and with the visitors smelling blood, the hosts could be ripe for the taking.

Having said that, Chelsea exposed some of Rennes’ frailties at the back, something that Angel Di Maria & co. could take advantage of. With the likes of Rafinha and Moise Kean eager to make an impact as well, PSG might just be able to eke out a narrow win. With that in mind, The Hard Tackle predicts a 2-1 victory for Thomas Tuchel & co. on Saturday.