Real Madrid will be aiming to keep up with early leaders Real Sociedad when they welcome Huesca to Estadio Alfredo Di Stefano on Saturday.

The games continue to come thick and fast across Europe, with the bigger teams playing multiple times in a week. Real Madrid are one such team, who will be returning to action just three days after their last game, as they play hosts to Huesca at the Alfredo Di Stefano Stadium on Saturday.

Inconsistency has been the name of the game for Real Madrid so far this season, with Los Blancos managing to win just four of their nine games across competitions. Each of those victories have come in La Liga, including last week’s 3-1 El Clasico triumph, meaning Zinedine Zidane & co. are currently second on the La Liga table behind Real Sociedad.

Huesca, on the other hand, have been slow off the blocks upon their return to the Spanish top-flight as unlike fellow newly-promoted side Cadiz, who are 6th in the standings, they are still looking for their first win of the season. Michel’s men, though, have been beaten just twice and they are 18th on the table, just a point away from safety.

Real Madrid were 3-2 victors in this fixture the last time they hosted Huesca in a La Liga game. And ahead of the latest meeting between the two sides, The Hard Tackle takes a closer look at Saturday’s encounter.

Zinedine Zidane does not have any fresh injury concerns hampering his preparations ahead of the visit of Huesca. While the Real Madrid manager had been sweating over the fitness of Thibaut Courtois, the Belgian goalkeeper should be available despite training inside due to a muscle discomfort.

Otherwise, the likes of Dani Carvajal, Alvaro Odriozola, Nacho, Martin Odegaard and Mariano Diaz are all unavailable, although Odriozola and Odegaard have resumed light training. The absence of a recognised right-back means Lucas Vazquez could start in the role once again.

On the opposite flank, Marcelo should be recalled, with Ferland Mendy being given a breather. At the heart of the defence, there is no looking past Sergio Ramos and Raphael Varane, with Courtois expected to continue between the sticks.

Up ahead in midfield, Toni Kroos could make way for Luka Modric, as Zidane continues to manage the German international’s minutes following his return from injury. Modric will provide company to Federico Valverde and Casemiro in the middle of the park.

Finally, in attack, Karim Benzema and Marco Asensio ought to retain their places, but Vinicius Jr. should drop out for Rodrygo Goes after a sub-par showing against Borussia Monchengladbach earlier this week. 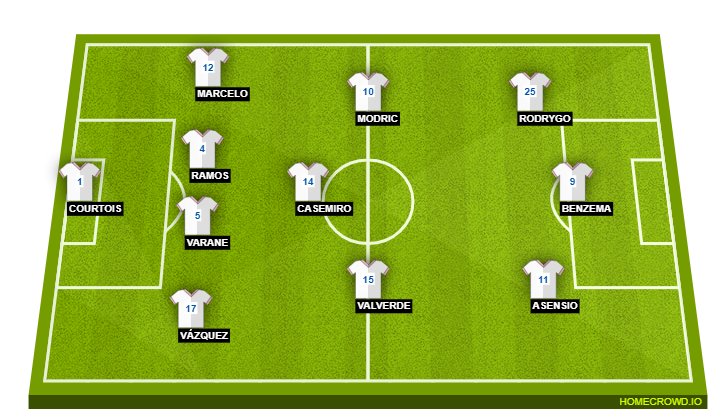 Michel does not have any pressing roster issues to contend with ahead of the visit to the Alfredo Di Stefano Stadium. Against Real Madrid on Saturday, the Huesca manager will continue to be bereft of the services of four first-team players, with Pedro Lopez, Mikel Rico, Shinji Okazaki and Antonio Valera all missing out from the travelling squad.

Michel has shuffled between the 4-4-2 and the 4-2-3-1 formations this season and is likely to keep faith in the former on Saturday. With the Real Madrid defence not really looking all that solid, the Huesca boss will hope his team’s strike partnership, which should feature Sandro Ramirez and Rafa Mir, can mount pressure on Raphael Varane and Sergio Ramos.

The midfield quartet will aim to remain compact when off the ball, with Pedro Mosquera and Idrissa Doumbia looking to dictate the defensive shape. The central duo will be supported by Borja Garcia and David Ferreiro, who will also have the creative impetus during transitions.

At the back, Dimitris Siovas and captain Jorge Pulido will partner up at the heart of the Huesca defence, with Pablo Maffeo and Javi Galan being the full-back pairing. In goal, there is no looking past Andres Fernandez. 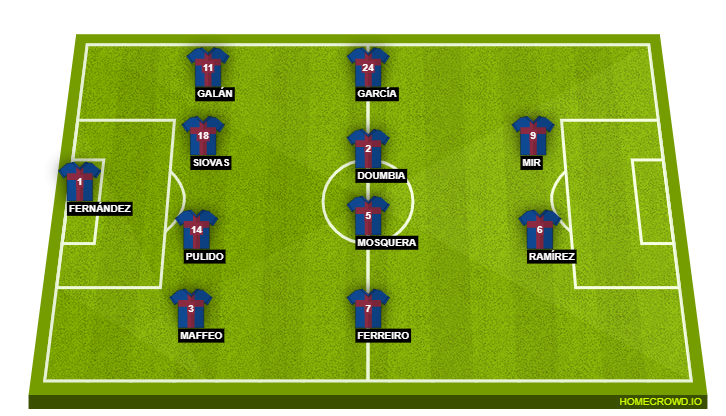 Eden Hazard is back in contention for Real Madrid. (Photo by David Ramos/Getty Images)

It has been a difficult transition from Chelsea to Real Madrid for Eden Hazard. Having arrived in the Spanish capital as one of the best players in the world, the expectations were invariably high. However, a spate of unfortunate injuries have curtailed Hazard’s involvement over the past 18 months or so.

Now, though, Hazard is making his way back from another injury and he will hope to put his misery behind him. Included in Real Madrid’s matchday squad to take on Huesca, Hazard could once again be introduced off the bench.

And the Belgian international’s undoubted qualities should come to the fore against a side that is quite stubborn on the defensive front. Expect Hazard to make a difference in the second half, especially if the game is closely contested.

This is a match between two sides that have not been the scorer’s delight so far. For all the talent at Zinedine Zidane’s disposal, Real Madrid have managed to score only nine goals in six league games till now, with a third of those coming in their most recent fixture. Huesca, on the other hand, have managed to find the back of the net just five times.

The visitors are not too vulnerable at the back either, having let in just 10 goals in seven outings. So, this is a game in which Real Madrid’s scoring woes could potentially continue. However, with Eden Hazard likely to come off the bench once again, Real Madrid might have the cutting edge in the second period to get over the line. The Hard Tackle, therefore, predicts a 2-0 win for the hosts.