Barcelona will hope to make it two wins in two in the UEFA Champions League when they face Juventus at the Allianz Stadium on Wednesday.

The curtains will fall on Matchday 2 of the group stage of the 2020/21 UEFA Champiosn League on Wednesday, with the marquee fixture of round set to be played. Originally billed as the clash between Cristiano Ronaldo and Lionel Messi, Juventus take on Barcelona at the Allianz Stadium.

Juventus have made a bit of a slow start to the 2020/21 season, with the players not immediately taking to the ways of Andrea Pirlo. The Bianconeri have won just twice in five Serie A matches and also won their opening Champions League fixture, beating Dynamo Kyiv 2-0 last week. However, the fluidity is missing from their game, especially in the absence of Ronaldo.

Barcelona, on the other hand, seem to be in a similar boat as their hosts. Unlike Juvenuts, though, the Blaugrana are not unbeaten, having already been beaten twice so far. The latest loss came in El Clasico this past weekend, as bitter rivals Real Madrid beat them 3-1. In the Champions League, however, Ronald Koeman & co. were off to a winning start last week, thrashing Ferencvaros 5-1.

Juventus and Barcelona were most recently paired together in the 2017/18 Champions League group stages, when Barcelona won 3-0 at Camp Nou and drew 0-0 in Turin. Ahead of the latest meeting between the two sides, The Hard Tackle takes a closer look at the encounter.

The big news ahead of the game has been pertaining to Cristiano Ronaldo. The former Real Madrid superstar has been missing since the international break due to his ongoing battle with COVID-19 and all eyes have been on whether he can be able to produce a negative test to make himself available to take on Barcelona.

However, with major doubts over his availability, it is unlikely that Ronaldo will feature for Juventus against Barcelona. Apart from Ronaldo, Andrea Pirlo will also be bereft of the services of Giorgio Chiellini, Matthijs de Ligt and Alex Sandro.

In the absence of Chiellini and de Ligt, the back-three of Merih Demiral, Leonardo Bonucci and Danilo ought to continue, although the Brazilian needs to raise his level. Federico Chiesa and Juan Cuadrado are likely to provide the width from the wing-back slots, with the onus being on the duo to provide the creative impetus.

Finally, the Juventus attack will see Paulo Dybala and Alvaro Morata combining in the strike partnership, meaning Dejan Kulusevski misses out despite impressing against Hellas Verona this past weekend. On the opposite end, there is no looking past Wojciech Szczesny in the Juventus goal. 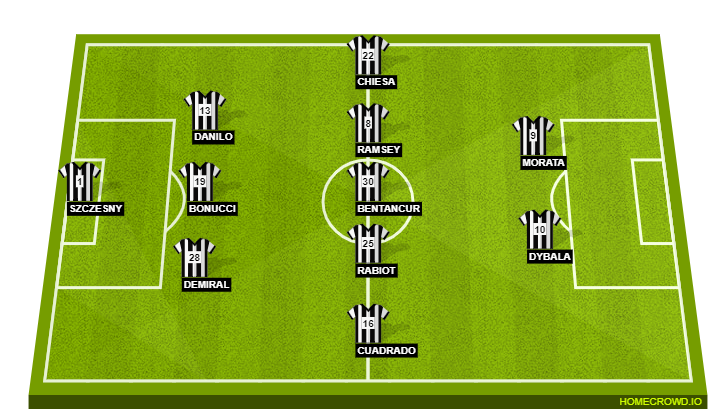 Much like his counterpart in the Juventus dugout, Ronald Koeman has a few pressing concerns hampering his preparations ahead of the trip to Turin. On Wednesday, the Barcelona manager will be without four first-team players due to injuries and suspension.

While Marc-Andre ter Stegen and Samuel Umtiti miss out due to a lack of match fitness, Philippe Coutinho is on the sidelines due to a hamstring injury, with no timescale on his return yet. The major short-term absentee for Barcelona, though, is Gerard Pique following his unnecessary dismissal against Ferencvaros last week.

In Pique’s absence, Ronald Araujo becomes a certain starter at the heart of the Barcelona defence alongside Clement Lenglet. Araujo and Lenglet will likely be flanked by Sergino Dest and Jordi Alba, with the duo providing a lot of creativity bombing down their respective flanks. In goal, Neto will continue to deputise for ter Stegen, who will soon be back from injury.

Up ahead in midfield, Frenkie de Jong is a certain starter in the double pivot. Who partners the Dutchman, though, remains a mystery. With Sergio Busquets being dreadful against Real Madrid last weekend, it is likely that Miralem Pjanic will get the nod to start versus former side Juventus on Wednesday.

Meanwhile, in Coutinho’s absence, Antoine Griezmann will finally get a chance to play in his favoured no. 10 role. It will be interesting to see if Griezmann can seize his opportunity following his explosive comments while on international duty with France. Francisco Trincao and Ansu Fati ought to be the two wide men for Barcelona, with Lionel Messi leading the line. 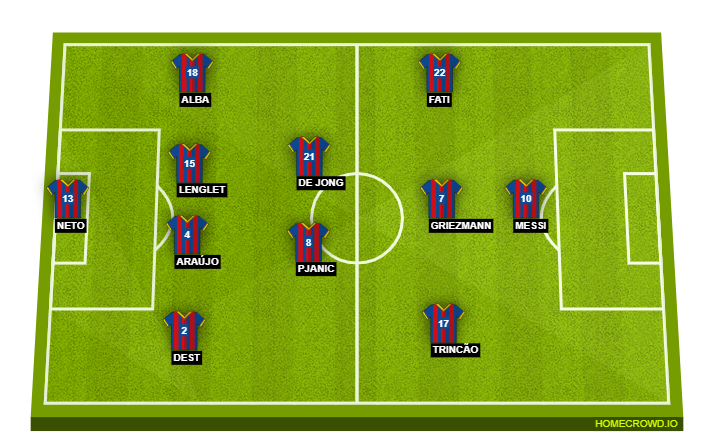 It has been an odd start to the season for Antoine Griezmann. With Luis Suarez no longer at Barcelona, it was believed that Griezmann would finally break free from the proverbial shackles that seemed to have been restricting him last season. However, that has not been the case.

Played either on the right wing or as the central striker so far, there has been no semblance of consistency in his game. To make matters worse, Griezmann has has risked facing the ire of Ronald Koeman following his explosive comments over what his best position is.

Now, though, the French international is set to be deployed in the position that he favours the most due to Philippe Coutinho’s absence due to a hamstring injury. Now is Griezmann’s chance to make the most of the opportunity that presents itself in front of him. Will he make it count?

This one is a little tough to call. Barcelona are set for a new phase in their history following the resignation of Josep Maria Bartomeu and their board. Bartomeu’s departure could, in turn, end up being a huge weight off the shoulders of the players, who have been playing with a lot of uncertainty looming around the club.

On top of that, it is being reported that Cristiano Ronaldo will be unavailable to take the field for Juventus on Wednesday, which provides Barcelona a further boost. With the Bianconeri far from being a fluent side under Andrea Pirlo, the visitors do seem to have the slightest of advantages heading into the game.

The players would also be eager to hit back following the big defeat in El Clasico this past weekend and it looks like Barcelona might edge this by the merest of margins. The Hard Tackle, therefore, predicts a 2-1 win for Ronald Koeman & co. with Antoine Griezmann and Lionel Messi producing the goods against Juventus.