Barcelona will aim to keep pace with La Liga leaders Real Madrid when they take on Getafe at the Coliseum Alfonso Perez on Saturday.

There is no rest for the weary at least as far as participants in the international break are concerned. Many of these will be back in La Liga action this weekend, as Matchday 6 of the 2020/21 season kicks off. Barcelona are one of the teams who will take the field on Saturday, as they lock horns with Getafe at the Coliseum Alfonso Perez.

Getafe have been typically solid at the onset of their 2020/21 La Liga campaign, one in which they will be eager to return to European football. The Azulones are currently 7th on the table, having lost just one of their four games so far. That defeat, though, came in their most recent encounter, as Jose Bordalas & co. were comprehensively beaten 3-0 by Real Sociedad.

Barcelona, on the other hand, yet to be beaten in the early stages of the 2020/21 La Liga season. The Blaugrana have, in fact, featured just thrice so far, having started their campaign two weeks late. However, they have managed to make some waves, although much like Getafe, Barcelona, too, will be eager to return to winning ways after being held to a 1-1 draw by Sevilla last time out.

The corresponding fixture last season had ended in a 2-0 win for Barcelona, with Luis Suarez and Junior Firpo scoring for the visitors. Ahead of the latest meeting between the two sides, The Hard Tackle takes a closer look at the encounter.

Jose Bordalas has a fully fit squad at his disposal ahead of the visit of Barcelona. (Photo by Benjamin Cremel/AFP/Getty Images)

Jose Bordalas has no fitness concerns hampering his preparations ahead of the visit of Barcelona. On Saturday, the Getafe manager will have a full strength squad to boast of, which makes his job that bit easier.

Bordalas will line his side up in his typical 4-4-2 formation, with David Soria taking his customary place in goal. In front of him, Djene Dakonam and Xabi Etxeita are expected to pair up at the heart of the Getafe defence, with Damian Suarez and Mathias Olivera being the two full-backs.

Up ahead in midfield, the onus will be on Nemanja Maksimovic and Mauro Arambarri to keep things tight in front of the backline and restrict the flow of the Barcelona moves. Out wide, Allan Nyom and former Barcelona man Marc Cucurella will be the players in charge of supplying the deliveries.

As for the strike partnership, Jaime Mata and Cucho Rodriguez will partner up in the final third, with the duo aiming to put the Barcelona defence under pressure on Saturday. Enes Unal and Angel Rodriguez will be the backup options on the bench, as far as attack is concerned. 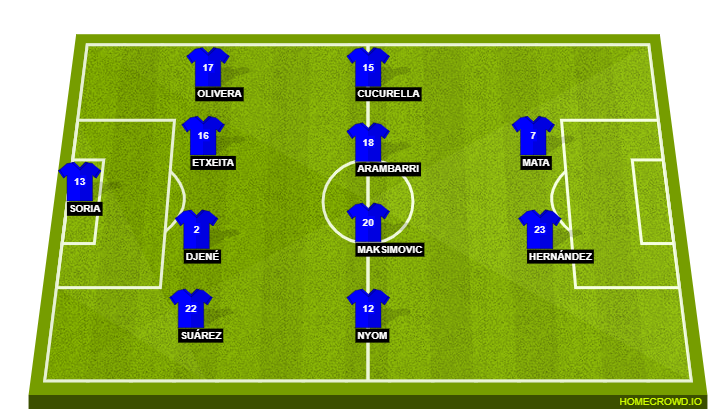 Unlike his counterpart in the Getafe dugout, Ronald Koeman has a few key players unavailable ahead of the trip to the Coliseum Alfonso Perez. On Saturday, the Barcelona manager will be bereft of the services of three first-team players.

Jordi Alba is a fresh fitness concern for Barcelona, with the Spanish international recovering from a hamstring injury. Apart from Alba, Koeman will also be unable to call upon Marc-Andre ter Stegen and Samuel Umtiti, both of whom are recovering from knee injuries.

It is the absence of Alba, though, which provides a source of concern. Having said that, Junior Firpo is back in the matchday squad and could start as Barcelona’s left-back against Getafe, with summer arrival Sergino Dest deployed on the right flank.

At the heart of the Barcelona defence, Koeman has Clement Lenglet at his disposal again and the Frenchman will start alongside Gerard Pique. The four-man backline will provide cover to Neto in goal, with the Brazilian continuing to deputise in the absence of ter Stegen. Midfield onwards is where the team selection becomes a little tricky.

Miralem Pjanic is yet to make his full debut for Barcelona and his wait could be extended on Saturday. The Bosnian worked out alone in Thursday’s session after picking up a back injury on international duty, meaning Frenkie de Jong and Sergio Busquets will start in the midfield double pivot.

In attack, the talking point has been about Antoine Griezmann’s starting position. The Frenchman seemed to take a swipe at Koeman after a superb performance on international duty with France, indicating that he would like to be used in a more central role.

However, during his pre-match press conference, Koeman rubbished talks of discontent, meaning Griezmann should start on the right flank once again, with Philippe Coutinho reprising the no. 10 role. On the left wing, there is no looking past Ansu Fati, while Lionel Messi will lead the line for Barcelona against Getafe despite talks of a possible rest. 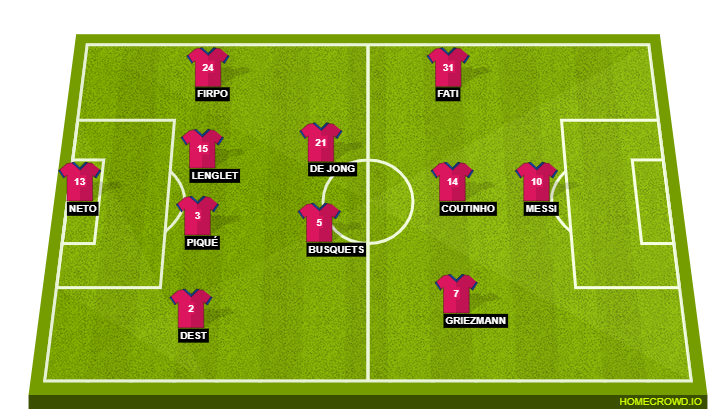 This one had the potential to be a crowded section. Junior Firpo is a player who will be keen to make a mark. Antoine Griezmann will be under the scanner after his big comments recently. Ansu Fati has the world at his feet after winning the Player of the Month for September. However, we are going with Philippe Coutinho here.

After the aforementioned comments made by Griezmann, Coutinho is under pressure to deliver the goods for Barcelona. The 28-year-old is coming off a fine international break with Brazil and his confidence appears to be sky high. If he can continue his fine run of form, Griezmann’s frustrations could continue, although that might just bode well for Barcelona.

Barcelona just do not lost to Getafe. Some way, somehow, the Blaugrana manage to eke out wins over their hosts on Saturday, if they do not make a comfortable outing out of it. On Saturday, the two sides are likely to play out a closely-contested game, especially with Barcelona still settling in under Ronald Koeman.

Getafe have looked imperious at home, but the form of Philippe Coutinho, Lionel Messi and Ansu Fati means they are set to face their first defeat at the Coliseum Alfonso Perez this season. The Hard Tackle, therefore, predicts a 2-1 win for Ronald Koeman & co. in a result that could help Barcelona go level with Real Madrid if they do not beat Cadiz earlier on in the day.