Real Madrid will hope to remain perched atop La Liga when they play hosts to Cadiz at the Alfredo Di Stefano Stadium on Saturday.

Club football action resumes this weekend after the near fortnight-long international break. In La Liga, the focus will be on the bigwigs on Saturday, with defending champions Real Madrid, Atletico Madrid and Barcelona all taking the field. Speaking of Real Madrid, they will welcome Cadiz to the Alfredo Di Stefano Stadium, looking to continue their unbeaten start to the campaign.

Real Madrid have come into the 2020/21 season as the reigning La Liga champions after clinching the title on the penultimate matchday last term. Los Blancos have made a bit of a wobbly start to their latest league campaign, with their attack not really going great guns. However, Zinedine Zidane & co. have been largely solid at the back, which has enabled them to an unbeaten start.

Cadiz, on the other hand, have been one of the more impressive teams at the start of the 2020/21 La Liga season. While Alvaro Cervera’s charges have been defeated twice after the first five round of fixtures, they have won two games as well, including one against Athletic Bilbao. Such results have taken the newly-promoted outfit to 9th on the table, just a point away from a place in the top four.

Real Madrid were 3-1 victors the last time they played hosts to Cadiz in a Liga Liga game, coming from a goal down before grabbing all three points. Ahead of the latest meeting between the two sides, The Hard Tackle takes a closer look at the encounter.

Zinedine Zidane does not have any fresh injury concerns hampering his preparations ahead of the visit of Cadiz. On Saturday, the Real Madrid manager will continue to remain bereft of the services of three first-team players.

The major absentee for the hosts is Eden Hazard, who is closing in on his return from a muscle injury. The chief issue for Zidane is the right-back slot, with both Alvaro Odriozola (calf) and Dani Carvajal (knee) still on the sidelines with their respective issues, although Odriozola could seen be at the Real Madrid boss’s disposal.

With the duo still unavailable, Nacho ought to start as the right-back ahead of Lucas Vazquez. At the heart of the Real Madrid defence, there is no looking past Raphael Varane and Sergio Ramos, while Ferland Mendy will be deployed on the left flank. In goal, Thibaut Courtois, who was the hero between the sticks last time out, is the automatic pick.

Up ahead in midfield, the fit-again Toni Kroos should be recalled, starting in the three-man unit along with Luka Modric and Casemiro. Kroos and Modric will bear the creative responsibility for Real Madrid while Casemiro will hold the fort in front of the defence.

Finally, in attack, Vinicius Jr. and Karim Benzema select themselves, with the former starting the season strongly. Vinicius will start on the left wing, with Marco Asensio expected to pip Rodrygo Goes to the spot on the right flank. Benzema will lead the line for Real Madrid against Cadiz. 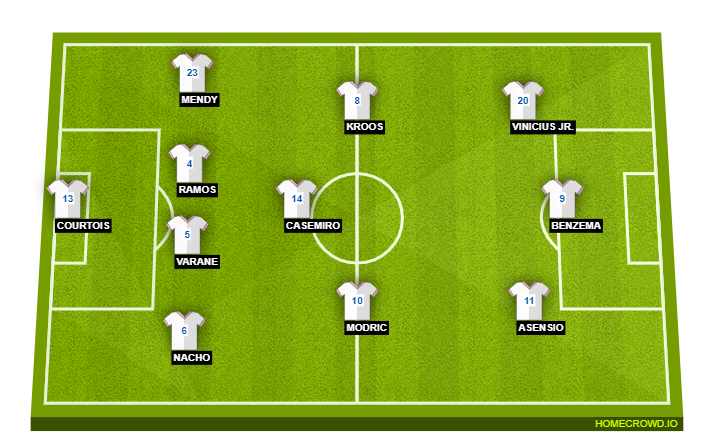 Alvaro Cervera has been handed a double selection boost ahead of his side’s visit to the Alfredo Di Stefano Stadium. Against Real Madrid on Saturday, the Cadiz boss will be without just two first-team players.

Those who miss out for the visitors are full-backs Luismi Quezada (knee) and Iza (hamstring). The good news for Cadiz, though, is the fact that Carlos Akapo and Alvaro Negredo are both at Cervera’s disposal once again after serving out their respective one-match bans.

With Iza out injured, Akapo ought to return to the side straightaway, starting as the visitors’ right-back. On the opposite flank, Alfonso Espino is a certain starter while at the heart of the Cadiz defence, Fali and Juan Cala are expected to pair up, with Marcos Mauro being left out of the travelling squad to take on Real Madrid.

The Cadiz defence will provide cover to Jeremias Ledesma, who could be a busy man in goal against Real Madrid on Saturday. The pedigree of the opponents should force Cervera to switch his side’s formation, reverting to the 4-2-3-1 on Saturday. In midfield, Jose Mari and Jens Jonsson will likely be deployed in the double pivot, with the duo shoring up the defensive side of things.

The creative onus will rest on Alex Fernandez, who will be deployed in the hole, with Jorge Pombo and Salvi Sanchez being the two wide men. Former Real Madrid man Alvaro Negredo should spearhead the Cadiz attack on Saturday. 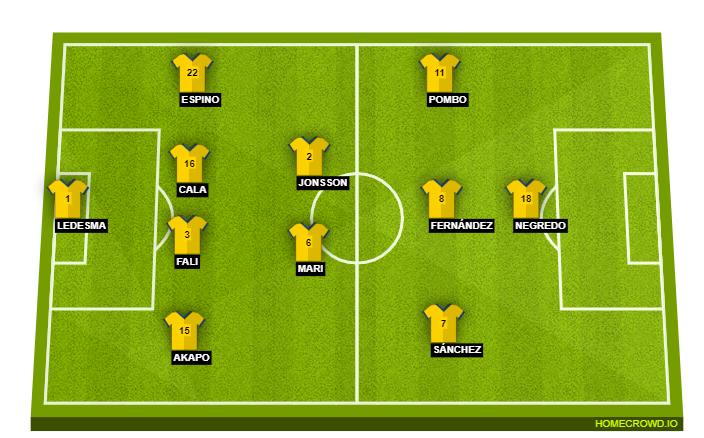 It has been a slow start to the season for Karim Benzema, who has not quite had his scoring boots on for the most part thus far. That changed last time out, when he netted a late goal against Levante to bring up 250 goals in Real Madrid colours.

Benzema will now hope to have rediscovered his best touch in front of goal, which starts with more involvement inside the opposition box. Will Benzema make it two, perhaps more, goals in as many games when Cadiz pay Real Madrid a visit on Saturday?

Cadiz have been quite impressive at the start of the 2020/21 season, which has been characterized by a reasonably solid showing at the back. Meanwhile, Real Madrid have looked quite unconvincing in the final third so far and that could probably keep Cadiz in the game for the most part at the Alfredo Di Stefano Stadium.

Having said that, the Merengues ought to benefit from the return of Toni Kroos, with Karim Benzema being a bigger factor in the final third. All things considered, Real Madrid should be relatively scot-free and The Hard Tackle predicts a 2-0 win for Zinedine Zidane & co.