Top spot in Group 1 of the UEFA Nations League A will be up for grabs when Italy welcome Netherlands to Stadio di Bergamo on Wednesday.

The international break is in full swing, with matches coming at an electric pace. Several teams are now set to feature in their third game of the fortnight. Two such teams will lock horns in a potential blockbuster of an encounter, as Italy play hosts to Netherlands at Stadio di Bergamo on Wednesday night.

Stability has been the name of the game for Italy under the tutelage of Roberto Mancini. While the Azzurri have not always dazzled, they have become a solid outfit, which reflects in their ongoing 18-game unbeaten run. As for their current UEFA Nations League campaign, Italy top Group A1 with 5 points on the board, just a point ahead of their next opponents.

Netherlands, on the other hand, are in a state of transition after the departure of Ronald Koeman, who is now the Barcelona manager. Frank de Boer has replaced Koeman at the helm of the Oranje, but his stint has not started on a positive note at all. In the two matches that the new head coach has overseen, Netherlands are without a win and failed to score a single goal.

Italy and Netherlands have already met once in the 2020/21 UEFA Nations League, with Wednesday’s hosts earning a narrow 1-0 win in Holland last month. Ahead of the latest meeting between the two sides, The Hard Tackle takes a closer look at the encounter.

Andrea Belotti misses out for Italy due to suspension. (Photo by Valerio Pennicino/Getty Images)

Roberto Mancini was already bereft of the services of Gaetano Castrovilli due to injury. The Italy head coach will now have to make do without Manuel Lazzari, Giacomo Bonaventura and Andrea Belotti, who is suspended.

Belotti’s absence means Mancini will make at least one change to the side that started in the goalless stalemate against Poland. Ciro Immobile is likely to come into the side for the Torino striker to spearhead the Italy attack, which could see another change as well.

Stephen El Shaarawy will hope to be handed a start in place of Lorenzo Pellegrini, taking his place on the left wing, with Federico Chiesa expected to keep his place on the opposite flank. In midfield, there is unlikely to be a change made to the balanced three-man unit featuring Jorginho, Nicolo Barella and Marco Verratti.

As for defence, Francesco Acerbi has played each of Italy’s two matches so far in the international break and could be given a breather. In his stead, Giorgio Chiellini should start in the central defensive partnership alongside Juventus teammate Leonardo Bonucci. Out wide, Alessandro Florenzi is a certain starter, but Cristiano Biraghi ought to replace Emerson Palmieri. 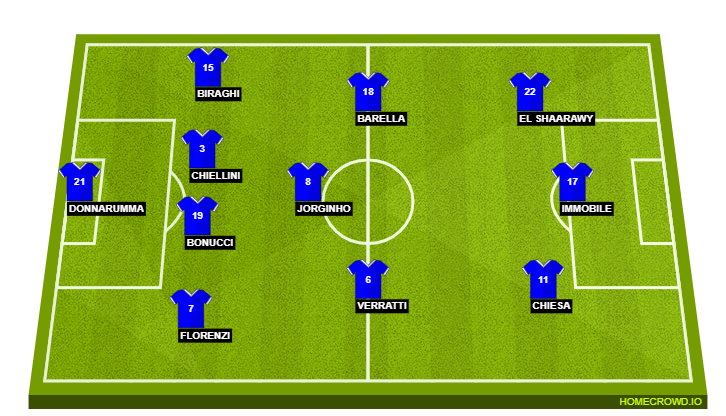 Frank de Boer has greeted a mixed bag of updates on the team news front ahead of the trip to Bergamo to take on Italy. While Memphis Depay is now available after serving his suspension last time out, Marten de Roon misses out due to a one-match ban. Meanwhile, Steven Bergwijn is not available after withdrawing from the squad.

In the absence of de Roon, Donny van de Beek will get a chance to impress, albeit in the double pivot instead of his more favoured no. 10 slot, where Georginio Wijnaldum is a certainty. Manchester United midfielder van de Beek will pair up with Frenkie de Jong, who will look to pull the strings in the middle of the park while van de Beek will aim to make an impact off the ball.

Depay, who is back at de Boer’s disposal, ought to return to the starting lineup straightaway, leading the line for Netherlands against Italy. The in-form Steven Berghuis should also be recalled to the lineup, starting on the right wing, with Ryan Babel replacing Quincy Promes on the left flank.

As for defence, there is only likely to be one shuffle, with Hans Hateboer coming in for Denzel Dumfries. On the left side of the Netherlands defence, Daley Blind should keep his place, while Stefan de Vrij and Virgil van Dijk are automatic picks as the central defensive partnership. Jasper Cillessen is the obvious pick in goal. 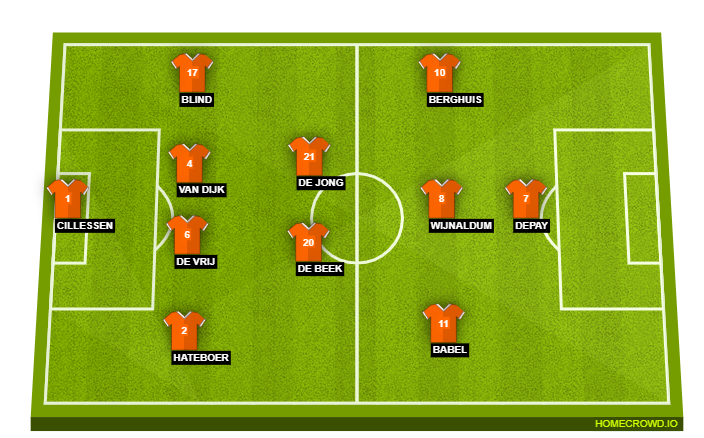 Netherlands have struggled in the post-Ronald Koeman era, having previously become one of the more solid teams in Europe. Frank de Boer is struggling to mould the team in his image in the early days so far, but he has also been unable to use his best players regularly till now. One such players is Memphis Depay.

The Lyon superstar, who was on the verge of joining Barcelona this past summer before a move failed to materialise, will be eager to get his head sorted. And, what better way to do so than to excel with a team that has been shaped with him being a part of the core and spine. With Netherlands also in desperate need of all three points, de Boer will have to turn to Depay for inspiration.

Heading into the game, Italy are unsurprisingly the favourites, even though they were uninspiring in their goalless draw with Poland last time out. However, unlike Netherlands, the hosts do carry some form into the game, whereas the Oranje seem to be lacking an identity, especially in attack. With that in mind, The Hard Tackle predicts a close game that should end in Italy’s favour.