Chelsea will be desperate to bounce back to winning ways when they play hosts to Crystal Palace at Stamford Bridge on Saturday.

The international break is nearly upon us but before club football takes a break for around 10 days, there is business to be conducted. In the Premier League, Gameweek 4 of the 2020/21 season kicks off on Saturday, with the latest round of fixtures starting with a London derby, as Chelsea welcome Crystal Palace to Stamford Bridge.

Chelsea had been off to a flier on the opening weekend, beating Brighton & Hove Albion 3-1, which only added to the positive feeling around Stamford Bridge after a busy summer. Since then, though, the Blues have come crashing down to the ground, winning just one of their four subsequent games.

The latest setback came in the form of their ouster from the Carabao Cup. That it came at the hands of bitter rivals Tottenham only seeks to further rub salt into their wounds. As they hope to get back to winning ways, things hardly get any more straightforward, with the tricky Crystal Palace up next.

The Eagles came into the 2020/21 season in a precarious position, but have been one of the most impressive teams in the early days of the latest Premier League campaign. Roy Hodgson & co. first beat Southampton on the opening day before claiming a big scalp in Manchester United. Last week, though, Crystal Palace suffered their first league defeat, with Everton beating them 2-1.

The corresponding fixture last season ended in a 2-0 win for Chelsea, with Tammy Abraham and Christian Pulisic on target for the Blues. Ahead of the latest meeting between the two sides, The Hard Tackle takes a closer look at the encounter.

Christian Pulisic could feature for the first time this season. (Photo by Catherine Ivill/Getty Images)

Frank Lampard has seen his squad’s injury woes ease up considerably ahead of the visit of Crystal Palace. On Saturday, the Chelsea manager will only be bereft of the services of two first-team players, those being Hakim Ziyech and long-term absentee Billy Gilmour.

Lampard had been sweating over the fitness of Timo Werner in the build-up to the game, but as it turns out, the German striker was only suffering from cramps late in the game against Tottenham. Werner is, therefore, fit to start against Crystal Palace and should make it to the starting lineup. In another piece of good news, Christian Pulisic has made good progress in training this week.

The young winger has been in full training ahead of this weekend’s game, and Lampard confirmed in his pre-match press conference that Pulisic will be in the matchday squad. Pulisic, though, will not start straight away, as was the case with Thiago Silva and Ben Chilwell before him.

Speaking of, Chilwell clocked in a decent amount of game-time against Tottenham and is in line to make his full Premier League debut for Chelsea when Crystal Palace visit Stamford Bridge. Silva, too, should be in the side despite the horrendous error at West Bromwich Albion last week.

In fact, the Brazilian defender ought to don the captain’s armband for Chelsea once again, with Reece James expected to start ahead of Cesar Azpilicueta at right-back once again. As for Silva’s partner at the heart of the Chelsea defence, Andreas Christensen should pip Kurt Zouma and Fikayo Tomori to that spot.

Up ahead in midfield, Jorginho should miss out once again in the Premier League, with N’Golo Kante starting alongside Mateo Kovacic in the double pivot. Mason Mount played the entire ninety once again, but the tireless Englishman ought to start yet again, with Kai Havertz coming in to reprise the no. 10 role.

With Pulisic unlikely to start, Werner should be deployed on the left side of the Chelsea attack, while Tammy Abraham will lead the line for the Blues against Crystal Palace. Olivier Giroud and Callum Hudson-Odoi will provide backup from the bench. Finally, in goal, it is Edouard Mendy’s time to make his Premier League debut, starting ahead of Willy Caballero and Kepa Arrizabalaga. 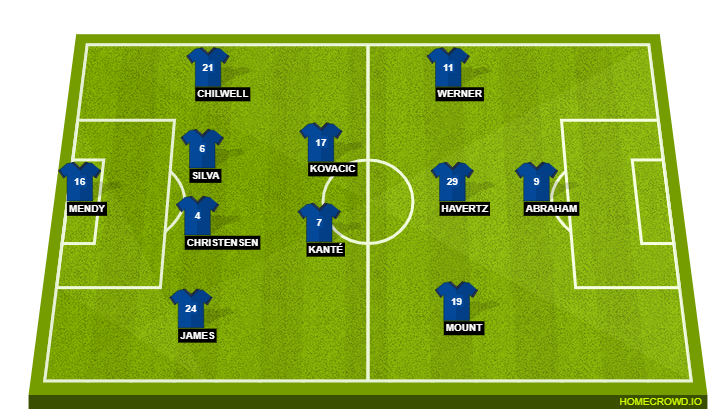 Unlike his counterpart in the Chelsea dugout, Roy Hodgson has a spate of issues hampering his preparations ahead of the short trip to Stamford Bridge. On Saturday, the Crystal Palace boss could be without as many eight first-team players, with the only semblance of good news being that most of the absentees are slated to return after the international break.

Those who are certain to miss out against Chelsea due to injuries are Gary Cahill, James Tomkins, Patrick van Aanholt, Nathan Ferguson and Connor Wickham. Jeffrey Schlupp and Scott Dann are major doubts and the game might have come too soon for them. Meanwhile, Michy Batshuayi is ineligible to take on parent club Chelsea due to the terms of his loan deal with Palace.

Schlupp’s absence means Eberechi Eze starts on the left flank once again, with Andros Townsend a certainty on the right-wing. The Crystal Palace attack will be spearheaded by Wilfried Zaha, with Jordan Ayew providing support by playing off the former Manchester United forward.

Midfield will hold the key for Crystal Palace against Chelsea on Saturday, with James McArthur and James McCarthy set to hold the fort in the middle of the park. Behind them, a makeshift defence will once again take the field.

The absence of a number of centre-back means Cheikhou Kouyate will start at the heart of the Crystal Palace defence, where he will partner Mamadou Sakho. Tyrick Mitchell will continue to fill the void of van Aanholt while Joel Ward is an automatic pick at right-back. In goal, there is no looking past the brilliant Vicente Guaita. 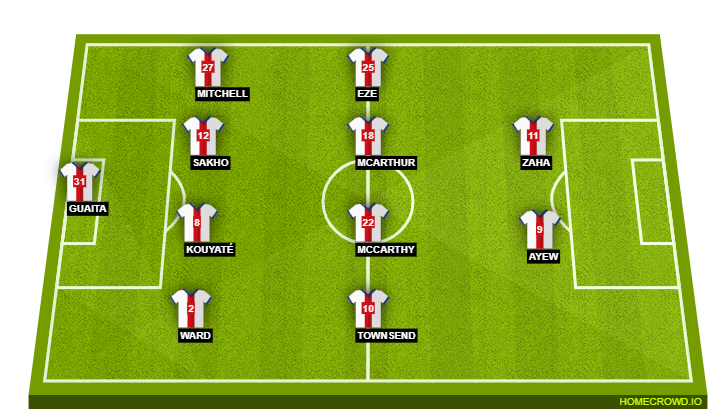 Following the incredible summer transfer business that they conducted all eyes ahead of every Chelsea game will invariably be on the big names that have come in. However, if Chelsea are to find a stable footing in the Premier League this season, their midfield will need to remain consistent.

It is here that Mateo Kovacic comes into the picture. By far the best player for Chelsea last season, Kovacic has looked good in the early goings of the 2020/21 season as well. And, against Crystal Palace, the Croat has to be at his very best in order to deny the visitors’ danger men, keeping them as far away from a vulnerable backline as possible. Can Kovacic deliver the goods yet again?

Chelsea fans might have been on top of the world following a remarkable summer transfer window, but it is fair to say that the Blues have been far from convincing so far. Frank Lampard has been unable to plug the gaping holes at the back while the players at the front have not yet managed to gel in properly.

Crystal Palace, on the other hand, are one of the form teams in the Premier League so far this term; and it took a ridiculous decision to end their perfect start to the season. Chelsea’s obvious problems at the back also mean the visitors will fancy their chances all throughout, with Wilfried Zaha aiming to improve an already solid record against the west Londoners.

This game has all the makings of being a closely-contested affair; one that should witness a lot of goalmouth action. In the end, it could be extremely difficult to separate the two sides, unless Timo Werner and Kai Havertz finally break their Premier League ducks. The Hard Tackle predicts a 2-2 draw at Stamford Bridge on Saturday.