Inter Milan will hope to continue their perfect start to the season when they lock horns with Benevento at the Municipal Stadium Ciro Vigorito on Wednesday.

The action has been relentless all across Europe for nearly a month now, with the domestic leagues shaping up quite well. In Italy, it’s Matchday 3 of the 2020/21 season, with Inter Milan taking to the field on Wednesday, when they will be facing off against Benevento at the Municipal Stadium Ciro Vigorito.

Benevento have begun only their second ever campaign in Serie A, having returned to the Italian top-flight after two years on the back of a triumphant 2019/20 Serie B season. Gli Stregoni were quite impressive in their season-opening fixture this past weekend, as they completed a hard fought 3-2 win at Sampdoria and they will hope to build on a solid start.

Inter Milan, on the other hand, have come into 2020/21 on the back of a promising campaign in the 2019/20 season, wherein they finished runners-up in the Serie A and Europa League. The aim would now be to go a step further, at least in one of the three competitions that the Nerazzurri will be a part of. Last weekend, Inter narrowly beat Fiorentina 4-3 to start their 2020/21 campaign.

Inter Milan were 2-1 victors the last time they clashed with Benevento in a Serie A fixture at the Municipal Stadium Ciro Vigorito. Ahead of the latest meeting between the two sides, The Hard Tackle takes a closer look at the encounter.

Filippo Inzaghi barely has any injury concerns hampering his preparations ahead of the visit of Inter Milan. On Wednesday, the Benevento manager will be bereft of the services of just one first-team player, with Nicolas Viola recovering from a knee injury.

Inzaghi will line his side up in his preferred 4-3-3 formation, with Lorenzo Motipo being the obvious choice between the sticks. In front of him, the key man for the hosts will be veteran centre-back Kamil Glik, who will need to use all his experience to keep Inter Milan at bay.

Glik will likely have Luca Caldirola for company at the heart of the Benevento defence, while Daam Foulon and Gaetano Letizia will be the full-back pairing for the hosts. Up ahead in midfield, the onus will be on Pasquale Schiattarella to keep things tight ahead of the backline.

Schiattarella will sit at the base of the three-man midfield, with support coming in the form of Artur Ionia and Bryan Dabo. Finally, in attack, Gianluca Lapadula will be the pivotal player, leading the line for Benevento against Inter Milan. Lapadula will be flanked by Roberto Insigne and Gianluca Caprari on Wednesday. 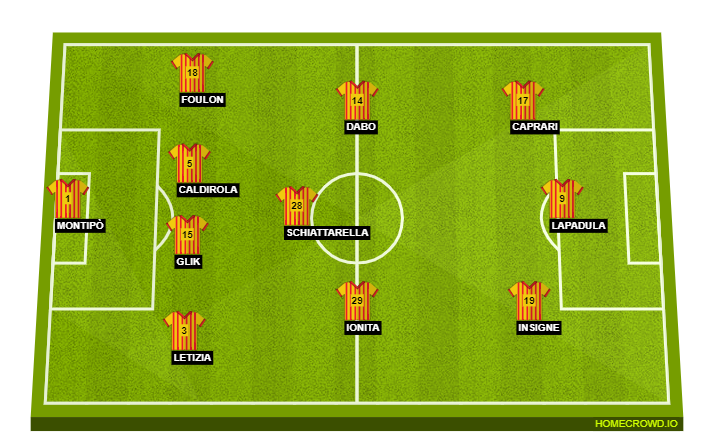 Much like his counterpart in the Benevento dugout, Antonio Conte hardly has any roster issues to contend with ahead of his side’s latest Serie A fixture. On Wednesday, the Inter Milan manager will be without just two first-team players, with Radja Nainggolan and Matias Vecino the only ones missing out.

In fact, Conte also greets some good news in the build-up to the game, with Stefan de Vrij now at his disposal after serving out his suspension. The Dutchman should return to the back-three straightaway, with Aleksandar Kolarov making way for him.

With Milan Skriniar’s Inter future a doubt, the Slovak misses out again. In his absence, Danilo D’Ambrosio will start on the right side of the three-man central defensive unit, with Alessandro Bastoni completing the back-three, which will provide cover to captain Samir Handanovic in goal.

Conte might alter his system slightly against Benevento, with Stefano Sensi returning in a box-to-box role, meaning Christian Eriksen drops down to the bench. Nicolo Barella and Marcelo Brozovic will be the other two midfielders for Inter Milan, with Arturo Vidal still awaiting his full debut.

However, one player who is likely to make his first start for Inter Milan is Achraf Hakimi. Ashley Young will, therefore, move to the left wing-back slot, with Hakimi starting on the right. Finally, the strike partnership should feature former Manchester United pair Romelu Lukaku and Alexis Sanchez, with Lautaro Martinez missing out. 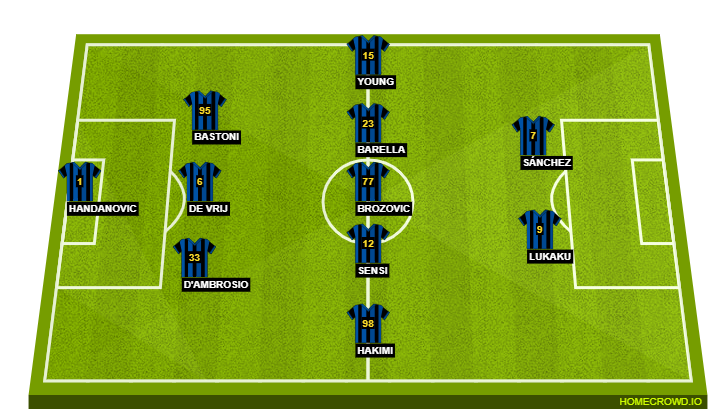 There are no two ways about it. The arrival of Achraf Hakimi from Real Madrid this summer has to be a game changer for Inter Milan. Last season, the young wing-back wreaked havoc at Borussia Dortmund and his absence can already be felt at the Signal Iduna Park.

A player who possesses remarkable attacking prowess, Hakimi would boost Inter Milan’s creative numbers in the final third considerably, showing the same already after providing the assist for Romelu Lukaku’s goal this past weekend. The only thing Hakimi needs to worry about now is settling in quickly, something Antonio Conte will be eager to ensure as well.

Benevento might be a newly-promoted side this season in Serie A. However, after just their first game back into the division, Filippo Inzaghi’s men have shown that they are no pushovers and will give most sides a run for their money. That has to be the case against Inter Milan as well, although the visitors have enough quality to grab all three points. We are going with a 2-1 Inter Milan win.