Manchester City will hope to kick-start their 2020/21 Premier League campaign in style when they take on Wolves at the Molineux on Monday.

The curtains will fall on Gameweek 2 of the 2020/21 season on Monday, with the two remaining matches scheduled for the day. The proceedings for the matchday ends at the Molineux, where Wolves will play hosts to Manchester City, hoping to produce another shocker against Pep Guardiola’s men.

Wolves started their 2020/21 Premier League campaign in solid fashion, beating Sheffield United at Bramall Lane last weekend. However, Nuno Espirito Santo & co. come into this game on the back of a narrow defeat to Stoke City in the Carabao Cup, meaning they now have just the FA Cup and the Premier League left to play for.

Manchester City, on the other hand, are yet to kick a ball this season, having been given extra time off after their excursions in the UEFA Champions League last month. Heading into the 2020/21 season, Pep Guardiola will hope to restore City’s status of being the Premier League champions, while also challenging on the other three fronts.

The corresponding fixture last season saw Wolves come from two goals down to beat Manchester City 3-2, with Adama Traore, Raul Jimenez and Matt Doherty on target. Ahead of the latest meeting between the two sides, The Hard Tackle takes a closer look at the encounter.

Jonny is the only absentee for Wolves against Manchester City. (Photo by Matthew Lewis/Getty Images)

Nuno Espirito Santo does not have any fresh injury concerns hampering his preparations ahead of the visit of Manchester City. On Monday, the Wolves manager will be without just one first-team player, with Jonny being a long-term absentee due to a knee injury.

In the continued absence of Jonny, summer signing Marcal ought to line up as the left wing-back for the hosts, with Adama Traore deployed on the right flank. Traore, though, will essentially play as the right-winger, with the wide men on paper, Daniel Podence and Pedro Neto drifting towards the left side more often that not.

Podence and Neto will provide support to Raul Jimenez, who will lead the line for Wolves against Manchester City. Meanwhile, Nuno will not be able to call upon Diogo Jota, who has joined Premier League champions Liverpool.

In midfield, Joao Moutinho and Ruben Neves will pair up, hoping to keep things tight while also looking to transition from defence to attack smoothly. Finally, the three-man central defensive unit will remain unchanged from last week, with Willy Boly, Conor Coady and Roman Saiss starting, while Rui Patricio will be the man in goal for Wolves. 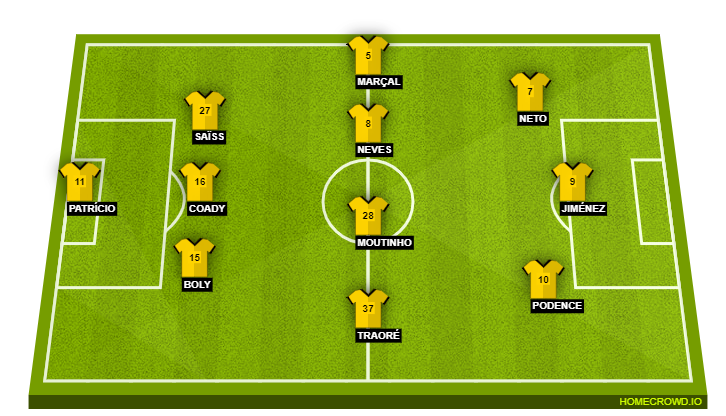 Unlike his counterpart in the Wolves dugout, Pep Guardiola does have a couple of pressing injury concerns. Against the Midlands club on Monday, the Manchester City manager will be without two first-team players, with Aymeric Laporte and Sergio Aguero unavailable.

Laporte’s unavailability is a huge blow for Manchester City, especially considering the way they struggled to maintain their shape in similar instances last season. However, this gives Nathan Ake the chance to make his debut and impress right from the word go.

Ake should be partnered by Eric Garcia at the heart of the Manchester City defence. Out wide, Kyle Walker and Benjamin Mendy will combine to form the full-back pairing, with the backline providing cover to Ederson, who will hope to make amends from the same fixture last season.

In midfield, Kevin De Bruyne and Rodri are obvious picks, with the former pulling the strings high up the pitch while Rodri will provide cover to the Manchester City defence. The third slot in the middle of the park should be taken up by Phil Foden, who will pose a major goal threat with his forays into the Manchester City box.

Finally, in attack, Aguero’s void should be filled by Gabriel Jesus, who will be eager to be more clinical in front of goal than he was last season. The two wide men for Manchester City ought to be Raheem Sterling and Riyad Mahrez. 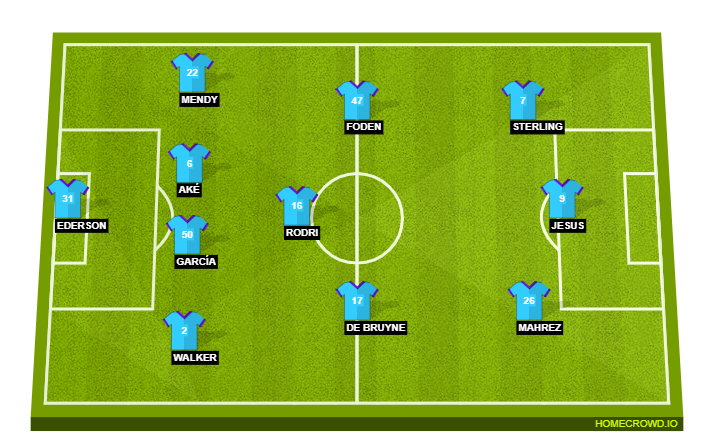 De Bruyne has been flying high for some time now. (Photo by Michael Regan/Getty Images)

Arguably the best player in the Premier League, Kevin De Bruyne is coming into 2020/21 on the back of a scintillating campaign last term, at least on a personal level. His superb season was capped off by winning the PFA Player of the Year award. By his own admission, though, he would rather win the trophies Manchester City failed to lift.

One of these trophies is the Premier League title. And, after seeing his team relinquish their crown to Liverpool, one can bank on De Bruyne to be on the money from the word go in order to ensure that Manchester City do not slip up at any stage of the season. Will De Bruyne be the main man for City once again?

This is a game that has all the makings of being a closely contested affair. Wolves have already played twice this season and are slowly finding their rhythm, despite the defeat in the Carabao Cup second round. Manchester City, on the other hand, should be rusty, meaning their output will take a hit on Monday.

With Wolves being resilient customers at the back, Manchester City could well be left frustrated for long periods in the game. However, the sheer quality they possess should enable the visitors to grab all three points, if only narrowly so. The Hard Tackle, therefore, predicts a 2-1 win for Pep Guardiola & co.