Leicester City will look to build on their big season-opening win last week when they welcome Burnley to the King Power Stadium on Sunday.

Gameweek 2 of the 2020/21 Premier League season continues on Sunday, with four further games on show. The big game on the day will be contested between Chelsea and Liverpool before the day’s proceedings culminate in the Midlands. Here, former champions Leicester City play hosts to Burnley at the King Power Stadium, hoping to make it two wins in two.

Leicester City came into the 2020/21 season full of hope and optimism after a fifth-placed finish last term. Although the Foxes were in the hunt for Champions League qualification right till the end the return of European football would be welcome either way.

Last week, Brendan Rodgers & co. kicked off the campaign with a 3-0 win at newly-promoted West Bromwich Albion, although the Leicester manager might not be all too satisfied with his team’s overall performance level. Up next for the former Premier League champions are Burnley, who will be playing their first league game of the season on Sunday.

The Clarets were originally pencilled in to face Manchester United in the opening week, but have seen their fixture being pushed forward owing to the 30-day break afforded to the Red Devils. Sean Dyche’s men began their 2020/21 campaign in the Carabao Cup, where they just about eked out a win over Sheffield United on penalties following 1-1 draw in regulation time.

The corresponding fixture last season ended in a come-from-behind 2-1 win for Leicester, with last season Premier League Golden Boot winner Jamie Vardy and Youri Tielemans on target after Chris Wood had given Burnley a 26th-minute lead. Ahead of the latest meeting between the two sides, The Hard Tackle takes a closer look at the encounter.

Brendan Rodgers is getting close to having a full strength squad at his disposal. Against Burnley on Sunday, however, the Leicester City manager will still be bereft of the services of a few players, with three first-team players missing out for the hosts.

The players who do miss out are Jonny Evans, Ricardo Pereira and Filip Benkovic, none of whom are expected to return before October. The positive news, however, is that club captain Wes Morgan is fully fit now after completing his recovery from a thigh injury. And, James Maddison could be fit enough to start after appearing off the bench against West Bromwich Albion last week.

Maddison should indeed be back in the advanced midfield role, with Leicester crying out for more creative impetus in the higher areas of the pitch. The Englishman will likely replace Dennis Praet to rekindle his partnership with Youri Tielemans.

The duo will be covered by Wilfred Ndidi, who ought to start in midfield after being deployed as a centre-back in the absence of Morgan last week. Indeed, the Leicester captain should pair up with Caglar Soyuncu at the heart of the Foxes’ defence, with Timothy Castagne and James Justin being the full-backs once again. In goal, there is no looking past Kasper Schmeichel.

Finally, the Leicester attack will be spearheaded by last season’s Premier League Golden Boot winner Jamie Vardy, who will hope to receive better service with Maddison returning. Vardy will have support from the flanks in the form Harvey Barnes and Ayoze Perez, both of whom will look to veer infield to create overloads and allow the full-backs to provide the width. 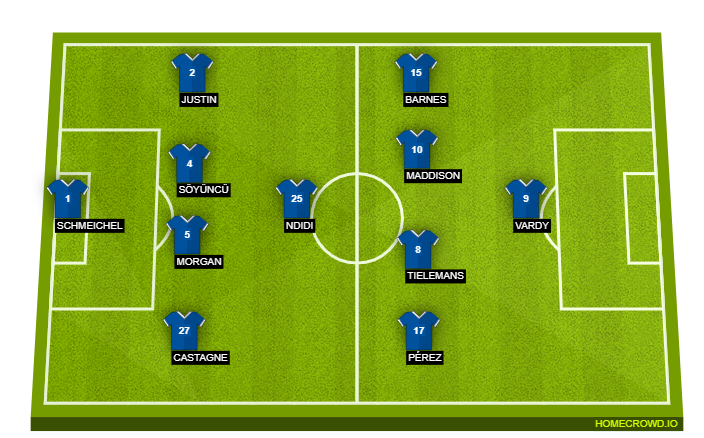 Unlike his counterpart in the Leicester City dugout, Sean Dyche has some big problems hampering his preparations ahead of his side’s first Premier League game of the season. On Sunday, the Burnley manager could be without as many as five first-team players.

The major concern for Dyche is his defence, with captain Ben Mee definitely sitting this one out due to a thigh injury. Meanwhile, James Tarkowski, who has also been linked with a move to Leicester, is struggling to overcome a toe injury to make himself available.

If Tarkowski remains on the sidelines, Jimmy Dunne will likely make his Premier League bow on Sunday. Having enjoyed a decent Burnley debut, the 22-year-old will hope to impress against Leicester as well, with Kevin Long being his central defensive partner.

Out wide, Charlie Taylor and Phil Bardsley will be the visitors’ full-back pairing, while the brilliant Nick Pope takes his place between the sticks. Up ahead in midfield, Dyche has Johann Berg Gudmundsson and Jack Cork missing, meaning his choices are once again restricted. In Cork’s absence, Ashley Westwood will be partnered by Josh Brownhill in the middle of the park.

Robbie Brady and Dwight McNeil, who will have the creative onus on him, will be Burnley’s two wingers against Leicester. Finally, with Ashley Barnes still not fully fit, Chris Wood and Jay Rodriguez will combine in Burnley’s strike partnership, with Matej Vydra being the backup option. 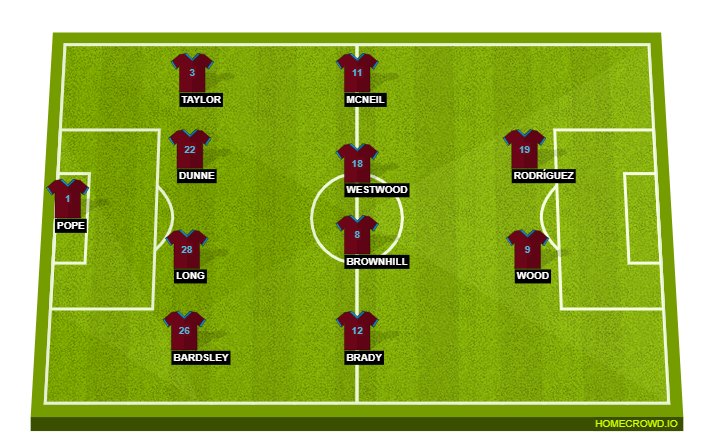 Jamie Vardy will once again invariably be the key man in front of goal for Leicester City. However, for Vardy to truly flourish and not bank on goals from the spot like last weekend, he will need ample creative support behind him, which brings the focus on James Maddison.

The English playmaker, who has been one of the best creative midfielders in the Premier League over the last couple of seasons. If he can be on top of his game against a stricken Burnley side on Sunday, Leicester could be due another big win, this time with the performance to back the result too.

As things stand, the odds are firmly stacked against Burnley. They have not won away at Leicester City in a top-flight game since 1968; Sean Dyche has a weakened squad at his disposal, with defence in particular looking flimsy to say the least. Leicester, on the other hand, ought to have their chief playmaker James Maddison back in the starting lineup.

If Maddison is firing, Jamie Vardy could deliver the goods once again for the hosts, which is exactly what Brendan Rodgers needs. Burnley, meanwhile, are unlikely to pose a great deal of threat and with all that in mind, The Hard Tackle predicts a 2-0 win for Leicester, handing Rodgers his 100th Premier League win. A difficult season could await Burnley.