A place in the UEFA Champions League quarter-finals will be on the line when Barcelona welcome Napoli to Camp Nou on Saturday.

The last of the UEFA Champions League Round of 16 ties will be played out this weekend, with the unique, one-time tournament nearly upon us. The big game on Saturday will be the tantalising clash between Barcelona and Napoli, who will meet at Camp Nou for the second leg.

For Barcelona, 2019/20 has been an underwhelming season to say the least. As things stand, the Catalans look likely to end their campaign without a single trophy, with Quique Setien’s position at Camp Nou increasingly under threat as well. In the Champions League, it has been more of the same for the Blaugrana, who have looked shaky so far, winning four of their seven games (D3).

Napoli, much like Barcelona, have endured a difficult campaign. Much like their hosts, the Serie A outfit sacked the manager who started the season at the helm before blowing hot and cold under the new boss. However, the Partenopei have shown good signs under Gennaro Gatusso, winning the Coppa Italia while being in contention for a spot in the Champions League quarter-finals.

The first leg, played at San Paolo back in February, saw Barcelona come from behind to hold Napoli to a 1-1 draw, with Antoine Griezmann cancelling out Dries Mertens’ opener. Ahead of the latest meeting between the two sides, The Hard Tackle takes a closer look at the encounter.

Antoine Griezmann is available for selection for Barcelona. (Photo by David Ramos/Getty Images)

Quique Setien has received a mixed bag of updates on the team news front ahead of the visit of Napoli. On Saturday, the Barcelona manager will be without just four-team players, with the likes of Clement Lenglet, Antoine Griezmann and Ronald Araujo recovering from their respective issues.

The players who do miss out for Barcelona, though, are Samuel Umtiti, Ousmane Dembele, Sergio Busquets and Arturo Vidal. Umtiti is the only player on the sidelines, due to a knee injury, while Dembele is still working his way back to fitness after recovering from a hamstring injury. Vidal and Busquets, meanwhile, are suspended.

The absence of Busquets could hurt Barcelona the most against Napoli, with the veteran Spanish international being top class this season so far. In Busquets’ absence, Ivan Rakitic is the natural replacement at the base of the midfield. Frenkie de Jong and the impressive Riqui Puig ought to provide defensive support to Rakitic, with the duo also tasked with providing the creative impetus.

Puig and de Jong will look to link up with Lionel Messi, who will often drop deep to pull the strings from central areas. This will allow Griezmann to veer infield and create a makeshift strike partnership with Luis Suarez in the offensive phase. With Griezmann and Messi cutting in, the onus will be on the full-backs Jordi Alba and Nelson Semedo to provide the width in the final third.

At the back, there is no looking past Gerard Pique and the fit-again Lenglet in the central defensive partnership, with Alba and Semedo flanking the duo. In goal, Marc-Andre ter Stegen it the obvious pick, with the German international being one of the key men for Barcelona.

Unlike his counterpart in the Barcelona dugout, Gennaro Gatusso barely has any roster issues hampering his preparations ahead of the visit to Camp Nou. Against Barcelona on Saturday, the Napoli boss will be without just one first-team player.

Kostas Manolas, who has given Barcelona one of their most forgettable moments in the Champions League in recent years, misses out due to a rib injury. Apart from the Greek defender, Gattuso is also sweating over the fitness of Nikola Maksimovic (knee) and Lorenzo Insigne (thigh), who are dealing with minor injuries.

Both players have been called up to be a part of the squad that has travelled to Barcelona. However, Maksimovic is unlikely to make the starting lineup, with Giovanni Di Lorenzo expected to pair up with Kalidou Koulibaly at the heart of the Napoli defence.

With Di Lorenzo shifting into the middle, Elseid Hysaj ought to start as the right-back, with Mario Rui a certain starter on the left. David Ospina will be the man between the sticks and the former Arsenal goalkeeper should be a busy man against Barcelona.

Up ahead in midfield, Diego Demme is expected to be recalled, with the 28-year-old playing the Anchor Man role in front of the back-line. Fabian Ruiz and Piotr Zielinski will be the box-to-box midfielders, with the duo providing the forward thrust from the middle of the park.

The big decision for Gattuso will be determining whether Insigne is fit enough to start on Saturday against Barcelona. Judging by his comments in his pre-match press conference, it seems likely that the Napoli captain will start, taking his place on the left wing. On the opposite flank, Jose Callejon is an automatic pick, while Dries Mertens will be the central striker for the visitors. 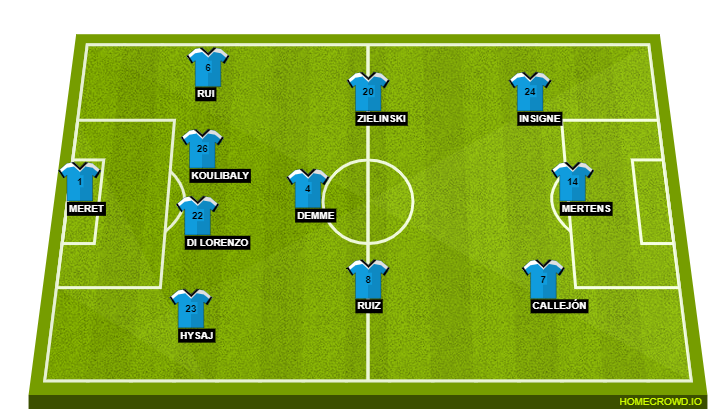 Messi will need to bring his A-Game against Napoli. (Photo by David Ramos/Getty Images)

Barcelona might have been a right mess this term, but their inconsistencies have not reflected one bit on Lionel Messi. In fact, the Argentine wizard has only continued performing at stunningly high levels in the ongoing campaign, finishing his La Liga campaign with 25 goals and a record 21 assists – simply astounding, even by his lofty standards.

That means, on his own, he directly contributed to over half of Barcelona’s goals in La Liga. But, in the Champions League, Messi’s record this season is not too great, with the Barcelona captain managing to find the back of the net just a couple of times.

That tally will need to be beefed up, if he is to inspire a struggling Barcelona side to a confidence-boosting Round of 16 win. If there is one player who can turn up almost at will, it is Messi, and he will be eager to set the record straight against Napoli.

One way or another, Barcelona have managed to complicate matters for themselves this season; so much so, that the usually calm Lionel Messi has ended up losing his cool. Indeed, their profligacy was one of the reasons why Real Madrid cruised towards the La Liga title post lockdown.

Having said that, the way their ended their league campaign would have filled the Catalans with some confidence. Napoli, though, would recognise that Barcelona are ripe for the taking and should take the game to their hosts. While the Partenopei have not exactly been consistent, they will seek to shut down spaces to frustrate a usually wasteful Barcelona side.

All things considered, one should expect a closely contested fixture which is expected to go right down to the wire. Barcelona, though, should be able to come out on top, if only just, due to the Messi factor. The Hard Tackle, therefore, predicts a 2-1 win for Quique Setien & co. to take them to the Champions League quarter-finals.