Aston Villa will be hoping to confirm their place in the Premier League next season when they take on West Ham United at the London Stadium on Sunday.

The end of the long-winding Premier League season is finally upon us. All the ten matches in Gameweek 38 of the 2019/20 season will be played out at the same time and many eyes will be on a game featuring two teams in the bottom half of the table, as West Ham United play hosts to Aston Villa at the London Stadium.

West Ham United have once again gone through a troubled season after a summer that promised a lot. The Hammers, who had aspirations of competing for a spot in Europe next season, have instead flirted with relegation. However, after losing just one of their last 6 Premier League games, David Moyes & co. have ensured their top-flight status for another season.

Aston Villa, like West Ham, have been mired in the relegation battle all through the season and have been on a decent run of form lately. The Villans looked dead and buried at the start of July, but after going three games without a loss, including the shock 1-0 win over Arsenal this week, Dean Smith’s men have climbed out of the drop zone and need just one point to be safe for good.

The reverse fixture, played at Villa Park back in September last year, was a drab affair that ended in a goalless draw, with Arthur Masuaku’s dismissal in the second half being the only major talking point. Ahead of the latest meeting between the two sides, The Hard Tackle takes a closer look at the encounter.

Robert Snodgrass could miss the final game of the season for West Ham United. (Photo by Warren Little/Getty Images)

David Moyes has a couple of fresh injury concerns to contend with ahead of the visit of Aston Villa. On Sunday, the West Ham United manager could be without as many as four first-team players, although each of those players are just doubts at present.

Ryan Fredericks and Robert Snodgrass would be hoping they have completely recovered from the issues that have kept them sidelined lately. In particular, though, Moyes will be sweating over the availability of Aaron Cresswell and Jarrod Bowen, both of whom have become key players for West Ham under him. The quartet will all face late fitness tests to determine whether they can feature.

In case Cresswell is unavailable, Arthur Masuaku, who was sent off in the reverse fixture against Aston Villa, will start as the left-back. Bowen, meanwhile, will be replaced by Andriy Yarmolenko in case he is not fit enough to make the starting lineup. Bowen, though, is not a serious concern and should start, but Cresswell might miss out.

Lukasz Fabianski has been excellent for West Ham in goal and there is no replacing him between the sticks. In front of him, Moyes is likely to line his side up in a 4-2-3-1 formation once again, with Issa Diop and Angelo Ogbonna pairing up at the heart of the defence.

Diop and Ogbonna were excellent against a tired Manchester United attack earlier this week and will hope to continue their good run. The duo will be flanked by Masuaku and Ben Johnson, who has stepped up marvellously in the absence of Fredericks. Up ahead in midfield, there is no replacing Declan Rice or Tomas Soucek.

Rice will hold the fort in front of defence while pulling the strings in the middle of the park. Soucek, who joined West Ham on a permanent deal this week, will support Rice defensively while also being tasked with creating overloads in the final third during the offensive phase. His late off the ball runs will also be key, making him as potent a threat as Michail Antonio at times.

Speaking of Antonio, the Englishman ought to keep his place ahead of Sebastien Haller, and will lead the line against Aston Villa. West Ham captain Mark Noble will play off Antonio, with Bowen and Pablo Fornals providing the creative spark from the flanks. 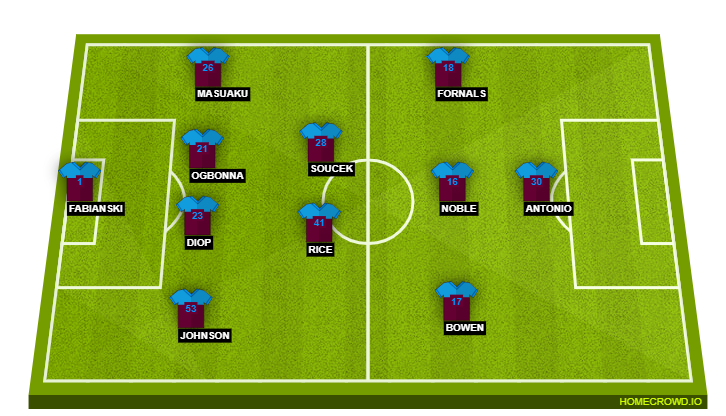 Like his counterpart in the West Ham United dugout, Dean Smith has a fresh fitness issue hampering his preparations ahead of the visit to the capital. On Sunday, the Aston Villa manager could be without as many as five first-team players.

Unlike Moyes, though, Smith knows that Ahmed Elmohamady will not be featuring against West Ham on Sunday after picking up a hamstring injury last time out against Arsenal. The others who are certain to miss out for Aston Villa are Tom Heaton (knee), Bjorn Engels (Achilles) and Wesley (knee), while Neil Taylor will have to prove his fitness ahead of the game.

Taylor, though, was unlikely to start anyway, with Matt Targett expected to be deployed as the left-back for the visitors. On the opposite flank, Frederic Guilbert will replace the injured Elmohamady. At the heart of the Aston Villa defence, Ezri Konsa and Tyrone Mings, who was excellent against Arsenal earlier this week, are automatic picks. Pepe Reina will be the man in goal.

Up ahead in midfield, Conor Hourihane will play the Anchor Man role, looking to keep things tight in the middle of the park while keeping a check on West Ham captain Mark Noble. Douglas Luiz, who has been linked with former club Manchester City and Arsenal lately, and John McGinn will be the box-to-box midfielders.

Luiz will play more of a defensive role while McGinn will look to take up more advanced positions on the pitch, when possible. The onus, meanwhile, will be on captain Jack Grealish to provide the spark in the final third. On the right flank, Trezeguet will look to keep his good run of form. Finally, Mbwana Samatta will spearhead the Aston Villa attack against West Ham. 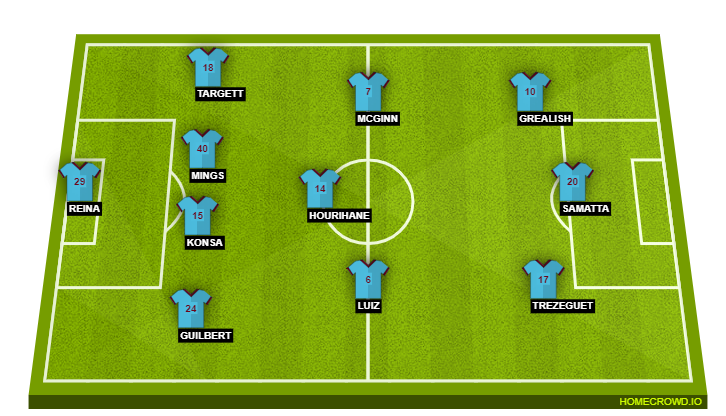 Michail Antonio is in the form of his life. (Photo by Laurence Griffiths/Getty Images)

West Ham United had a tricky run-in and it looked like they could go till the end of the season to ensure their place in the Premier League for the 2020/21 season. However, thanks in large part to one man’s exploits, they can breathe easy heading into the final day. That man is Michail Antonio.

In the form of his life, Antonio has scored eight goals since the resumption of the Premier League – no player has scored more. This included a freakish four-goal haul against Norwich City and against an Aston Villa side that could be pushing for a win, he can be backed to find the back of the net at least once. Will Antonio keep his fine run going?

Confidence can do wonders for a team that is battling relegation. So can desperation. Combine the two and a team plays without inhibitions and that is Aston Villa in the last three games. West Ham United, on the other hand, are safe and sound, and while they will be playing without pressure, David Moyes will be eager to end the season with a win.

A certain Michail Antonio will be keen on continuing his tremendous run of form and should be on target on Sunday. Having said that, Aston Villa should do enough to earn one point, thereby keeping their Premier League status intact for another season. The Hard Tackle, therefore, predicts a 1-1 draw between the two sides.