Barcelona will be hoping to end their La Liga campaign on a high when they take on Deportivo Alaves at the Mendizorrotza Stadium on Sunday.

The curtains are set to fall on the 2019/20 La Liga season, with all ten games in the final round of fixtures set to be played at the same time on Sunday evening. Outgoing champions Barcelona will play the final game of their league campaign when they lock horns with Deportivo Alaves at the Mendizorrotza Stadium.

Alaves have endured a roller-coaster of a 2019/20 season, having flirted with relegation as their La Liga campaign wore on. However, ahead of their final game, Juan Muniz’s men can breathe easy, knowing that they are safe for another season at the very least, having beaten Real Betis 2-1 earlier this week.

For Barcelona, on the other hand, 2019/20 has been a highly disappointing season, as they are set to end their campaign without any domestic haul – a rarity for the Catalan giants in the past half a decade or so. The Blaugrana’s fate was sealed earlier this week, when they were beaten 2-1 at home by ten-man Osasuna, leaving Real Madrid with an unassailable seven-point lead.

The reverse fixture, played at Camp Nou back in December, ended in a 4-1 win for Barcelona, with Antoine Griezmann, Arturo Vidal, Lionel Messi and Luis Suarez on target for the Catalans, while Pere Pons scored a consolation goal for Alaves. Ahead of the latest meeting between the two sides, The Hard Tackle takes a closer look at the encounter.

Juan Muniz has one fresh roster issue to contend with ahead of the visit of Barcelona. On Sunday, the Deportivo Alaves manager will be without four first-team players, with Rodrigo Ely the latest absentee, due to a suspension incurred after being sent off against Real Betis last time out.

Ely’s void at the heart of the Alaves defence is likely to be filled by Lisandro Magallan, who is expected to partner Victor Laguardia. Apart from Ely, Muniz will also be missing the services of Ruben Duarte, Fernando Pacheco and Ximo Navarro. But, the Alaves manager will be able to call upon Martin Aguirregabiria, who served out his suspension in the last game.

Aguirregabiria is likely to take his place on the right side of the defence, replacing Tachi. On the opposite flank, Adrian Marin is a certain starter. The Alaves back-line will provide cover to Roberto, who is on loan from West Ham United.

Up ahead in midfield, a couple of shuffles are expected, with Tomas Pina expected to come into the double pivot, where he will likely have Victor Camarasa for company. Former Barcelona man Aleix Vidal could also be recalled, starting on the left wing, with Edgar Mendez expected to continue on the right flank.

The strike partnership ought to feature Lucas Perez, who was given a breather against Real Betis. Perez, who will replace Oliver Burke, will pair up with fellow Alaves’ joint-top scorer Joselu upfront. 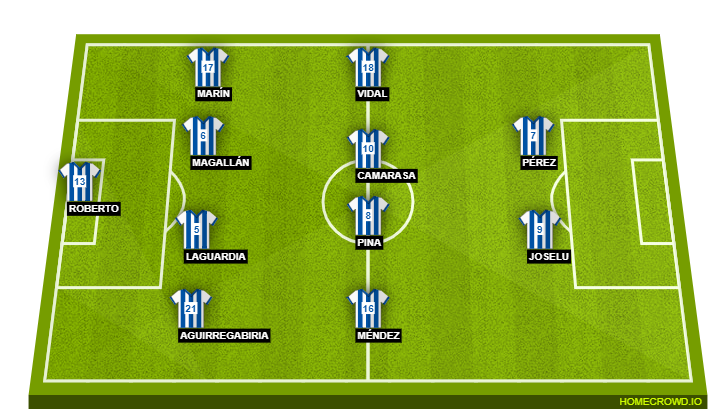 Unlike his counterpart in the Deportivo Alaves dugout, Quique Setien is bogged down a great deal by a myriad of squad issues ahead of his side’s final La Liga game this season. On Sunday, the Barcelona boss will be without as many six first-team players, with three of them suspended.

The aforementioned three players are Gerard Pique, Junior Firpo and Ivan Rakitic, who might just have played his final game for Barcelona. Apart from the trio, Samuel Umtiti, Ousmane Dembele and Antoine Griezmann also miss out due to injuries.

Setien might just use this game to rotate his troops and keep the key players fresh for the challenge that beckons in the UEFA Champions League next month. With that in mind, Marc-Andre ter Stegen could be given the night of, with Neto making a rare appearance in La Liga in his stead.

In defence, the Barcelona manager is down to his bare bones, with Ronald Araujo and Clement Lenglet the only fit centre-backs, while Jordi Alba is the only recognised left-back at his disposal. It is only at right-back where Setien has options, with Sergi Roberto likely to get the nod over Nelson Semedo; Araujo, Lenglet and Alba will be the others in the back four.

Up ahead in midfield, Sergio Busquets ought to return, replacing Rakitic at the base of the three-man unit. Arturo Vidal could also be recalled and with Frenkie de Jong likely to be eased back into the side, Riqui Puig will keep his place. Puig, who has been a rare positive for Barcelona since the resumption of the season, will be given the freedom to roam up the pitch and pull the strings.

Lionel Messi was perhaps, the only positive in defeat for Barcelona against Osasuna, but looks in need of rest. Having said that, the Barcelona captain is expected to start for the umpteenth time, with Luis Suarez leading the line against Alaves. The final spot in the side should be taken up by Ansu Fati, with Martin Braithwaite being the backup option on the bench.

Alaves might have been a goal shy unit, but star striker Lucas Perez has enjoyed a fine season in front of the net. With 11 strikes to his name, the former Arsenal man has been one of the rare positives in the final third for Babazorros El Glorioso.

In fact, such has his impact been that Perez was even linked with a shock move to Barcelona not too long ago. A move might not have come to fruition, but with the Barcelona attack blowing hot and cold, Perez could show what they are missing. A strong performance might also set the tone for a big result on Sunday.

With the league title relinquished, Barcelona have nothing left to play for in La Liga this season. Yes, they have the UEFA Champions League to look forward to and Quique Setien would hence, be eager to keep his key players fresh. However, with no real motivation left, Alaves could be in with a chance to spring a surprise.

The Lionel Messi factor, though, does give Barcelona the edge, but Alaves, with Lucas Perez and Joselu in tow, might just manage to grab a point here. With that in mind, The Hard Tackle predicts a 2-2 draw between Barcelona and Alaves at the Mendizorrotza.