A place in the FA Cup final will be on the line when Arsenal lock horns with Manchester City in their semi-final clash at Wembley on Saturday.

FA Cup action resumes this weekend and the penultimate stage of this season’s competition will be played out next. The first of the two semi-finals will be played between Arsenal and Manchester City, who will be facing each other at Wembley on Saturday evening, in what will be a battle of the master and the apprentice.

Arsenal have been shaky in the FA Cup, as has been the case with them across competitions this term. The Gunners have won three of their four games so far by a margin of a solitary goal, beating Sheffield United 2-1 in the quarter-finals to reach the Last 4 stage. Mikel Arteta’s men, though, will be coming to this game buoyed after their shock 2-1 win over Liverpool earlier this week.

Manchester City, on the other hand, have been thoroughly dominant for the most part, beating Port Vale, Fulham, Sheffield Wednesday and Newcastle United en route to the semi-finals. The Citizens have been in decent touch of late, winning each of their last three games, with the aggregate scoreline in those games being 12-1.

Arsenal and Manchester City have already locked horns twice this season, with Pep Guardiola & co. winning both games by a 3-0 scoreline. Ahead of the latest meeting between the two sides, The Hard Tackle takes a closer look at the FA Cup encounter.

Eddie Nketiah is among the absentees for Arsenal. (Photo by Justin Setterfield/Getty Images)

Mikel Arteta does not have any fresh injury concerns hampering his preparations ahead of his side’s return to FA Cup action. Against Manchester City on Saturday, the Arsenal manager will be without as many as six first-team players.

The likes of Bernd Leno, Pablo Mari, Calum Chambers and Gabriel Martinelli are all sidelined due to fitness issues. The worst news surrounds Martinelli, who is unlikely to play again in 2020. Apart from the aforementioned quartet, Arteta will also be missing Eddie Nketiah, who is suspended, and Cedric Soares, who is cup-tied after featuring for Southampton earlier in the FA Cup.

Arteta rotated his side heavily for the game against Liverpool in the hopes of keeping some of his regulars fresh for the Manchester City test. So, the Arsenal manager is expected to make a raft of changes on Saturday, with the first shuffle being in defence.

Rob Holding was rock solid against Liverpool and could be rewarded with a second successive start. Shkodran Mustafi, though, will return to the back-three, with Kieran Tierney being moved into the left wing-back slot. The third man in the back-three will be David Luiz, who will be desperate to make amends after his horror showing against Manchester City last month.

Meanwhile, with Leno still unavailable, Emiliano Martinez ought to take his place in the Arsenal goal once again. Up ahead in midfield, Dani Ceballos should be recalled after being give a breather last time out. Ceballos will have Granit Xhaka for company in the middle of the park, with Hector Bellerin starting as the right wing-back.

In attack, two further changes are expected, with captain Pierre-Emerick Aubameyang and Nicolas Pepe likely to start out wide. Alexandre Lacazette will lead the line for Arsenal, hoping to continue his fine run of form against Manchester City on Saturday.

Unlike his counterpart in the Arsenal dugout, Pep Guardiola will be bereft of the services of only a couple of players. On Saturday, the Manchester City manager will be unable to call upon Sergio Aguero and Claudio Bravo.

While Aguero is out for the foreseeable future due to a knee complaint, usual cup goalkeeper Bravo is nursing a muscular injury and will not feature against Arsenal. In Bravo’s absence, Ederson will start between the sticks for the FA Cup holders.

Like Arteta, Guardiola chose to either rest some of his key players completely or introduce them as substitutes in the game against Bournemouth. Aymeric Laporte will return to the heart of the Manchester City defence, with Eric Garcia likely to be his partner. Benjamin Mendy and Kyle Walker should be the full-back pairing.

Up ahead in midfield, the big recall will be Kevin De Bruyne’s, who should be fresh to take on Arsenal, having been left on the bench throughout the ninety minutes last time out. De Bruyne ought to have Rodri and Ilkay Gundogan for company in the middle of the park.

Upfront, Gabriel Jesus is likely to be the only constant. The Brazilian will continue to spearhead the Manchester City attack in the absence of Aguero and will be flanked by Riyad Mahrez and Raheem Sterling, both of whom were second half substitutes against Bournemouth. 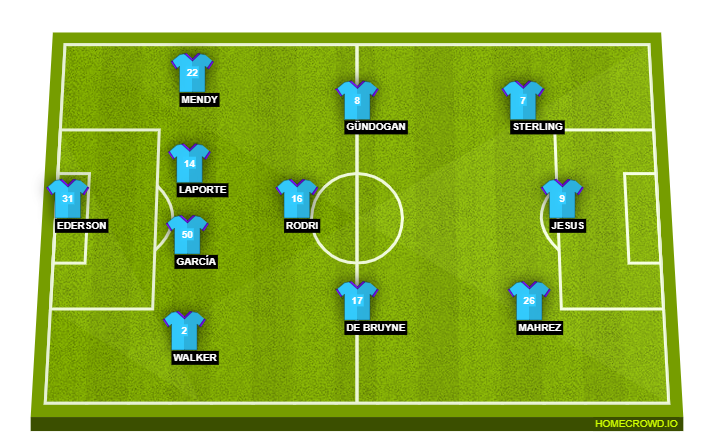 Back among the goals, can Lacazette keep his good run going? (Photo by Richard Heathcote/Getty Images)

It has been a roller-coaster of a season for Lacazette, who, before the resumption of the season, had been in terrible touch. His future, in turn, was called into question and it seemed like the French striker could soon be on his way out of Arsenal. Lacazette, though, has hit back at his naysayers in some style.

After a spectacular goal against Tottenham last weekend, Lacazette was instrumental in Arsenal’s shock win over Liverpool earlier this week, having had a hand in each of their goals. Now, with a place in the FA Cup final up for grabs, Lacazette needs to continue his good run and support Pierre-Emerick Aubameyang, if Arsenal are to stand a chance against the mighty Manchester City.

This is quite an interesting match-up. Mikel Arteta will be eager to make a point after being handed a 3-0 humbling by his mentor Pep Guardiola the last time Arsenal and Manchester City met. Since then, though, Arteta has turned things around remarkably, addressing some of the gaping holes in his side’s defence.

With both sides resting some key players in the lead-up to the game, a high-octane game is likely to be played out, with the match going right down the wire. However, it is Manchester City who should come out on top in this close contest, owing to their superior quality on the bench. The Hard Tackle is predicting a 2-1 win for Guardiola and his charges.