Outgoing champions Manchester City will look to return to winning ways when they welcome Newcastle United to the Etihad on Wednesday.

The games are not letting up in the Premier League, and Gameweek 34 of the 2019/20 season will continue on Wednesday. Outgoing champions Manchester City will be in action on the day, when they play hosts to an in-form Newcastle United side at the Etihad.

For Manchester City, it has been an excruciatingly frustrating season. In fact, so poor have their performances been at times that the Citizens have lost more games than the likes of Arsenal and Manchester United. The latest such defeat came this past weekend against Southampton, who beat them 1-0 courtesy a bizarre, yet brilliant goal by Che Adams.

Newcastle United, on the other hand, have proved their doubters wrong under the tutelage of Steve Bruce, having initially been labelled as one of the favourites to drop to the Championship at the end of the season. However, the Magpies are essentially safe already and are now targeting a top ten finish. Last time out, the Tynesiders were held to a 2-2 draw at home by West Ham United.

The reverse fixture, played at St. James’ Park in November last year, had ended in a 2-2 draw, but Manchester City did beat Newcastle 2-0 in the FA Cup a couple of weeks ago. Ahead of the latest meeting between the two sides, The Hard Tackle takes a closer look at the encounter.

Sergio Aguero is the only absentee for Manchester City. (Photo by Michael Regan/Getty Images)

Pep Guardiola does not have any fresh injury concerns hampering his preparations ahead of his side’s latest fixture. Against Newcastle United on Wednesday, the Manchester City manager will be without just one first-team player, with Sergio Aguero still nursing his knee injury.

In Aguero’s absence, Gabriel Jesus and Raheem Sterling have shared the duty of leading the line for Manchester City. Jesus is likely to be the striker once again for Manchester City, with Sterling being used on the left wing. On the opposite flank, Riyad Mahrez should hold on to his spot.

Phil Foden has lately been deployed in an advanced role on the right wing. When Newcastle pay Manchester City a visit, though, the prodigious youngster could be used in his more favoured role in midfield. However, Foden, who will have Kevin De Bruyne and Rodri for company in the middle of the park, should be given the freedom to roam higher up the pitch.

As for the back-line, young Eric Garcia should be given another chance to impress at the heart of the Manchester City defence alongside Aymeric Laporte. The full-backs from the last game, though, should drop down to the bench, with Kyle Walker and Benjamin Mendy being recalled. Ederson’s poor positioning enabled the Southampton goal, but there is no replacing the Brazilian in goal. 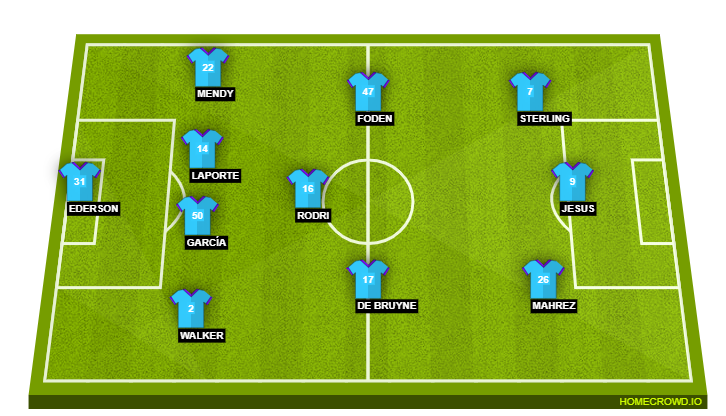 Unlike his counterpart in the Manchester City dugout, Steve Bruce has a bunch of fitness issues plaguing his squad ahead of the latest fixture. On Wednesday, the Crystal Palace manager could be bereft of the services of as many as eight first-team players.

The players who will definitely miss out for the visitors are Ciaran Clark, Florian Lejeune, Isaac Hayden and Sean Longstaff. In addition, Newcastle will also be without Allan Saint-Maximin, while the likes of Jamaal Lascelles, Miguel Almiron and Andy Carroll will face late fitness tests to determine their availibility.

It is likely that none of the three players will start against Manchester City, giving Bruce a major selection headache. In case Lascelles is not fit to start, Fabian Schar and Paul Dummett will pair up with Federico Fernandez at the heart of the Newcastle defence, with Danny Rose and DeAndre Yedlin being the two full-backs. The excellent Martin Dubravka will be stationed between the sticks.

In Hayden’s absence, Nabil Bentaleb will line up alongside Jonjo Shelvey in the midfield double pivot. Matt Ritchie is the natural replacement for Saint-Maximin, with the 30-year-old providing a double defensive shield on the right flank while also posing a threat on the set-pieces. On the left flank, Joelinton should start again, with Dwight Gayle being the central striker. 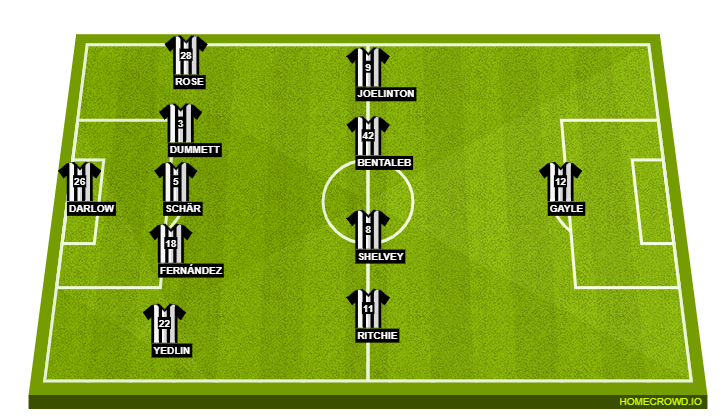 Foden will get a chance to impress against Newcastle United. (Photo by Oli Scarff/AFP via Getty Images)

It has finally been the breakthrough season that Manchester City fans had been yearning for Phil Foden to have. The young midfielder has been involved quite a bit, especially since the turn of the year, with Liverpool’s title win helping him rake in even more minutes.

The Englishman has appeared to be increasingly confident with each passing game and as Pep Guardiola starts to begin his preparations for next season, a strong performance here could help Foden nail down a place as a regular for years to come. Another big game beckons for the 20-year-old.

Manchester City might have struggled to get the required result last time out, but they were looking quite strong for large parts of the game. At home, the outgoing Premier League champions are even more rampant and will fancy their chances of a straightforward win, especially with Newcastle United likely to travel without some of their most important players.

The Magpies are currently on a solid six-game unbeaten streak, but this is where that fantastic run comes to an end. Expect Phil Foden to impress yet again, with Kevin De Bruyne making up for lost time in the last game with a top class showing on Wednesday. The Hard Tackle predicts a 2-0 win for Pep Guardiola & co.