Chelsea will be eager to consolidate their place in the top four when they lock horns with Crystal Palace at Selhurst Park on Tuesday.

The games continue to come thick and fast in the Premier League, with Gameweek 34 beginning less than 24 hours after the end of the last round of fixtures. The first of the ‘Big Six’ teams in action in the latest matchday are Chelsea, who will take on Crystal Palace in what will be a tricky outing for the Blues.

Crystal Palace resumed their Premier League campaign with a 2-0 win over Bournemouth, which meant that they had won four games in a row without conceding a goal. Since then, though, the Eagles’ form has dropped off a cliff, as Roy Hodgson’s men have let in 8 goals without scoring one themselves; their latest defeat was at Leicester City last weekend.

Chelsea, on the other hand, have blown hot and cold since the restart of the season, true to their nature under Frank Lampard so far. The Blues started with three wins on the bounce before being handed a shock 3-2 loss by West Ham United last week, although they did bounce back with a strong 3-0 win over Watford this past weekend.

The reverse fixture, played at Stamford Bridge back in November last year, ended in a 2-0 win for Chelsea, with Tammy Abraham and Christian Pulisic on target. Ahead of the latest meeting between the two sides, The Hard Tackle takes a closer look at the encounter.

Roy Hodgson does not have any fresh injury concerns hampering his preparations ahead of the visit of Chelsea. On Tuesday, the Crystal Palace manager will be without just three first-team players, with James Tomkins, Jeffrey Schlupp and Martin Kelly all missing out.

Hodgson could make a few shuffles to freshen things up and try and force a change of form from his players against Chelsea. Vicente Guaita will be a busy man between the sticks, with the visitors expected to dominate the proceedings.

The first change should come at the back, with Scott Dann coming in for Mamadou Sakho to pair up with former Chelsea captain Gary Cahill at the heart of the Crystal Palace defence. Joel Ward and Patrick van Aanholt, though, are certain starters as the two full-backs.

In midfield, Cheikhou Kouyate ought to be recalled in order to provide more steel in the middle of the park. Captain Luka Milivojevic will sit at the base of the midfield, with James McArthur and Kouyate being the two box-to-box midfielders. Wilfried Zaha and Andros Townsend are likely to be the two wide men, with Jordan Ayew expected to lead the line instead of Christian Benteke. 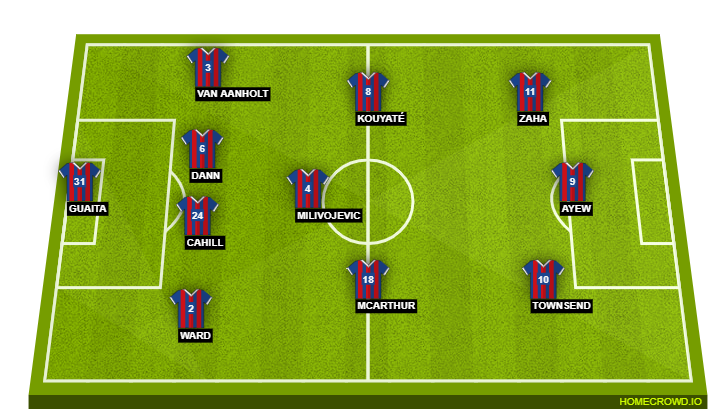 Unlike his counterpart in the Crystal Palace dugout, Frank Lampard has one new fitness trouble on his hands ahead of his side’s cross-London trip. On Tuesday, the Chelsea manager will be without three first-team players.

The latest player to be sidelined is N’Golo Kante, who picked up a hamstring injury in the 3-0 win over Watford last time out. Kante, who has had his fair share of injury issues this season, will be out for a week. Meanwhile, Mateo Kovacic and Fikayo Tomori have rejoined training but the game has come too soon for the duo.

Antonio Rudiger has had his misgivings at the back since the resumption of the Premier League, but is likely to start at the heart of the Chelsea defence. Andreas Christensen has stepped up well of late and will be Rudiger’s partner. Reece James should hold on to his spot at right-back, meaning captain Cesar Azpilicueta will start on the left once again. Kepa Arrizabalaga will be in goal.

As far as midfield is concerned, Kante and Kovacic’s absence means Jorginho will be returning to the starting lineup as the defensive midfielder, although Billy Gilmour is an alternative too. Mason Mount and the in-form Ross Barkley will be his partners in the middle of the park.

Willian and Christian Pulisic have been the key players for Chelsea over the last few weeks. The duo will once again be crucial in determining the final result and will be the two wingers against Crystal Palace. Olivier Giroud found the back of the net against Watford, but could be rotated as the games come thick and fast. As a result, Tammy Abraham should lead the line for Chelsea.

TIme to step up. (Photo by Oli Scarff/AFP via Getty Images)

After a superb first half of the season, things have gone haywire for Tammy Abraham. After being bogged down by injury woes upon the turn of the yet, the English striker has now gone on to lose his place in the side, with Olivier Giroud making a case for himself lately.

On Tuesday against Crystal Palace, Abraham could get a chance to impress. With Timo Werner arriving soon, time is running out for Abraham to prove to Frank Lampard that he has what it takes to be the long-term solution when leading the line for Chelsea. A big game beckons.

This is a game that often proves to be tricky for most big sides visiting Selhurst Park. The same should be the case with Chelsea, especially with the Blues managing just one clean sheet in the Premier League, when playing away from home. So, we can expect Palace to cause some damage.

Having said that, the Eagles’ form has been horrible for some time and Chelsea should go relatively unscathed. Finally, Crystal Palace are the only side yet to score more than twice in a Premier League game this season and the record should continue on Tuesday, with Chelsea beating them 2-1.