Juventus will be hoping to strengthen their place atop the Serie A table when they take on Torino in Derby della Mole at the Allianz Stadium on Saturday.

The games are coming thick and fast all across Europe’s active leagues and Italy is not far behind. Serie A champions Juventus will be in action on Saturday evening, as they play hosts to Torino in Derby della Mole at the Allianz Stadium.

Juventus have slowly been finding their rhythm since the resumption of Serie A. Having been beaten in the Coppa Italia final ahead of the return of league football, the Bianconeri have gone on to win each of their three top-flight games and come into the derby on the back of a 3-1 win over Genoa earlier this week.

Torino, on the other hand, have performed over the last few weeks in the same fashion that they had before football was halted due to coronavirus pandemic. Il Toro have lost back-to-back games after beating Udinese 1-0 in their first tie back. The poor results have meant that Moreno Longo & co. find themselves 13th on the Serie A table and precariously just 6 points outside the drop zone.

The reverse fixture, played at Stadio Olimpico Grande Torino back in November last year, ended in a 1-0 win for Juventus, with Matthijs de Ligt scoring the only goal of the game. Ahead of the latest meeting between the two sides, The Hard Tackle takes a closer look at the encounter.

Maurizio Sarri does not have any fresh injury concerns hampering his preparations ahead of the visit of Torino. On Saturday, the Juventus manager will be without five first-team players, with Mattia De Sciglio, Alex Sandro, Giorgio Chiellini, Merih Demiral and Sami Khedira unavailable.

The number of injuries in defence means there is very little scope for rotations at the back. Matthijs de Ligt should, therefore, start alongside Leonardo Bonucci at the heart of the Juventus defence. Alex Sandro’s absence means Danilo will start as Juventus’s left-back once again, with Juan Cuadrado starting on the right. In goal, Gianluigi Buffon ought to start, in what will be a landmark evening for him.

Up ahead in midfield, Miralem Pjanic and Rodrigo Bentancur pick themselves, with the former starting as the deep-lying playmaker. As for the third slot, Adrien Rabiot is likely to start again, with Aaron Ramsey having to make do with a place on the bench.

Finally, in attack, two of the three spots are practically decided beforehand itself. Paulo Dybala will be reprising the False Nine role, while Cristiano Ronaldo will start on the left wing. The final spot in the side will likely be taken up by Douglas Costa, who looked in good touch last time out. 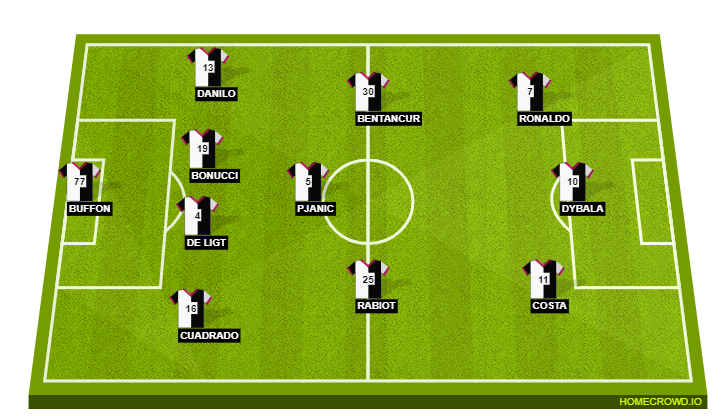 Unlike his counterpart in the Juventus dugout, Moreno barely has any fitness troubles to contend with ahead of his side’s latest fixture. On Saturday, the Torino manager will be without just one first-team player, with Daniele Baselli out with a long-term knee injury.

Longo ought to line his side up in a 3-5-2 formation, with Salvatore Sirigu taking his place between the sticks for Il Toro. The Italian goalkeeper is likely to be guarded by a back three that will comprise of Lyanco, Bremer and Nicolas N’Koulou.

When off the ball, Torino’s shape will shift to a 5-3-2, with the two wing-backs, who are expected to be Ola Aina and Cristian Ansaldi, dropping deep in order to cut off the passing lanes and force Juventus to depend largely on crosses from out wide.

In the middle of the park, Tomas Rincon will hold the fort in the front of the back-line, reprising the Anchor Man role. Rincon will have defensive support from Sasa Lukic and Soualiho Meite, with the duo also focusing on transitioning from defence to attack quickly. Finally, the key man for Torino will be Andrea Belotti, with former Juventus man Simone Zaza being his strike partner. 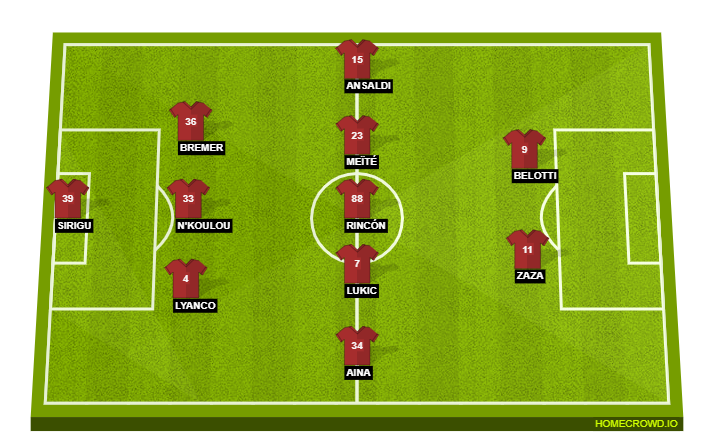 Time to make an impression. (Photo by Marco Bertorello/AFP/Getty Images)

The transfer saga finally ended this week, as Arthur is set to make his way to Juventus once the season ends, while Miralem Pjanic will join Barcelona. With just over a month left for Pjanic with the Bianconeri, he would want to depart on a high and impress his new employees at the same time.

As his audition for next season begins, the time is perfect for Pjanic to find some semblance of consistency in his game, having blown hot and cold this term. In doing so, he could also prove the skeptics wrong, with many questioning Barcelona’s decision to indulge in such a transfer.

Torino might have had a decent time out at the Allianz Stadium in recent Serie A meetings with Juventus. However, the defending champions appear to be in no mood to slip up and allow Lazio a chance to close the gap to them.

The visitors should pose some threat on Saturday. But, the likes of Cristiano Ronaldo, Paulo Dybala and Douglas Costa have what it takes to make it a difficult evening for Moreno Longo’s men. With that in mind, The Hard Tackle predicts a 3-1 win for Maurizio Sarri & co.