Liverpool can go on the brink of winning the Premier League title when they lock horns with Everton in the Merseyside Derby at Goodison Park on Sunday.

Gameweek 30 of the 2019/20 Premier League season continues on Sunday, with three matches on show. The day’s proceedings will end with a blockbuster encounter, as Everton play hosts to local rivals Liverpool in the Merseyside Derby at Goodison Park, with the Reds just two wins away from winning the title.

Everton have endured yet another Premier League campaign that promised much at the onset only for it to be riddled with inconsistencies. However, the Toffees have improved definitively since the appointment of Carlo Ancelotti as the new head coach, losing just 3 of the 11 games he has overseen (W5 D3) and a late charge for Europa League qualification is not out of question yet.

Liverpool, on the other hand, have been an all conquering force in the Premier League this season. The Reds have beaten every single team in the competition, dropping a mere 5 of the 87 points that have been on offer so far. Winning their first top-flight title in the Premier League era now appears to be a formality and they might just break a number of records along the way.

The reverse fixture, played at Anfield back in December, ended in a 5-2 win for Liverpool, with Divock Origi, Xherdan Shaqiri, Sadio Mane and Georginio Wijnaldum netting for the Reds while Everton saw Michael Keane and Richarlison score the consolation goals. The Hard Tackle now takes a closer look at the encounter.

Yerry Mina misses out due to a thigh injury. (Photo by Alex Livesey/Getty Images)

For most clubs, the three-month break came as a blessing in disguise as a number of their injured players became available. For Everton, though, it has been the exact opposite, with Carlo Ancelotti bereft of the services of five first-team players ahead of the visit of Liverpool.

The problems start right at the back, with Yerry Mina missing out for the Toffees due to a thigh injury. In the Colombian defender’s absence, Mason Holgate will start alongside Michael Keane at the heart of the Everton defence against Liverpool, with Seamus Coleman and Lucas Digne being the two full-backs. The back-line will provide cover to Jordan Pickford.

Apart from Mina, Ancelotti will also be unable to call upon Jean-Philippe Gbamin, Fabian Delph, Theo Walcott and Cenk Tosun. The Everton boss, though, has plenty of cover in his squad, with Andre Gomes starting in the midfield double pivot alongside Tom Davies.

The two wide midfielders in the 4-4-2 will be Gylfi Sigurdsson and Bernard, both of whom will look to venture inwards and create overloads in the central spaces. The strike partnership will feature the reliable duo of Dominic Calvert-Lewin and Richarlison; and the duo will be keen on getting a scoring run going in the run-in. 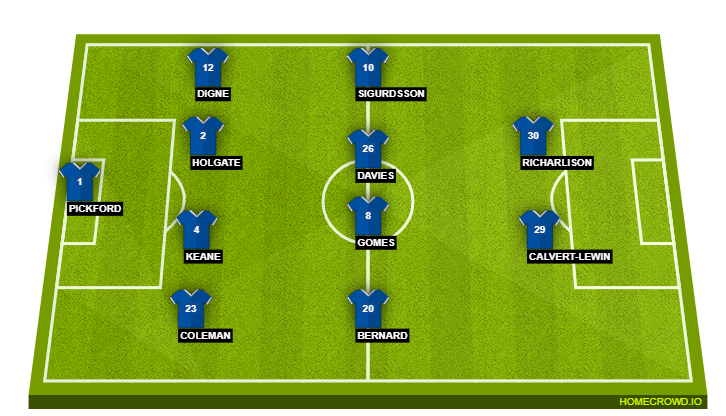 Unlike his counterpart in the Everton dugout, Jurgen Klopp does not have any long-term absentees in his squad apart from Xherdan Shaqiri, whose struggles continue. Having said that, the Liverpool manager has been sweating over the fitness of Andrew Robertson and Mohamed Salah, with the duo missing large chunk of this week’s training after picking up knocks.

By Friday, though, both Salah and Robertson had made their way back to training and it is believed that the two players had a light session. But, Klopp is unlikely to take a chance with either player if he is unable to prove his fitness, meaning Salah could start on the bench at the very least.

If so, Sadio Mane will shoulder a lot of responsibility in the final third in terms of scoring goals. Mane will have Roberto Firmino for company in the three-man attacking unit, with Divock Origi likely to come in as Mane and Firmino’s partner if Salah is not fit to start.

In midfield, Jordan Henderson will start after regaining his fitness. Henderson is having a stellar 2019/20 campaign and is in the running to be named the PFA Player of the Year. Henderson will reprise the no. 8 role and so will Georginio Wijnaldum, with the pair being the workhorses in the middle of the park. Meanwhile, Fabinho will play the Anchor Man role, sitting in front of defence.

As for the Liverpool back-line, Virgil van Dijk will pair up with Joe Gomez in the central defensive partnership, with Trent Alexander-Arnold and Robertson being the full-backs. However, in the off chance that Robertson cannot start, James Milner will likely be named as the Reds’ left-back. Finally, in goal, the fit again Alisson Becker is the obvious pick.

Mohamed Salah and Sadio Mane are once again in the running to win the Premier League Golden Boot and are likely to go all out in the remaining nine fixtures to finish with the most goals. With Salah possibly starting on the bench, this is Mane’s chance to pounce and close the gap to Jamie Vardy.

As far as the team’s perspective is concerned, Mane will have a lot of onus on him to deliver the goods, especially with Salah not starting. A big game for the Senegalese speedster, who had not quite been at his best before the suspension of football back in March.

Everton have been a non-factor in just about every game they have played against Liverpool in recent years. With the Reds chasing their first league title in 30 years and with plenty of records to be broken, the visitors are unlikely to have their foot off the gas, especially in a game where pride is also at stake.

Everton will surely make life difficult for Liverpool and if Dominic Calvert-Lewin can continue from where he left off in March, a closely contested affair could ensue. Having said that, Liverpool will have plenty of quality to eke out a win, even if narrowly so. The Hard Tackle is, therefore, going with a 2-1 win for Jurgen Klopp & co.