Napoli and Juventus will be vying for the Coppa Italia when they go head-to-head at Stadio Olimpico in Rome on Wednesday night.

Football might only just be back in Italy, but the first trophy is set to be contested for already. The Coppa Italia will be up for grabs this Wednesday night, when Napoli and Juventus will lock horns at Stadio Olimpico in Rome.

Napoli started their 2019/20 Coppa Italia campaign in the Round of 16, where they beat Perugia 2-0 before setting up a quarter-final date with Lazio. The Partenopei got past them as well to book their place in the semi-finals, where they met Inter Milan. The Nerazzurri were quite the competition for Gennaro Gattuso’s men, who won the contest 2-1 on aggregate.

Juventus, on the other hand, entered the competition at the same stage as Napoli, easing past Udinese with a 4-0 win. The Bianconeri then cruised to a 3-1 win over AS Roma before meeting AC Milan at the penultimate stage of the competition. A low-scoring affair, the tie ended in a 1-1 draw after two legs, with Juventus progressing to the final due to the away goals rule.

Napoli and Juventus have already met each other twice this season, with both sides winning one game apiece. Ahead of the latest meeting between the two sides, The Hard Tackle takes a closer look at the Coppa Italia finale.

David Ospina misses out against Juventus due to suspension. (Photo by Francesco Pecoraro/Getty Images)

Gennaro Gattuso has one fresh roster issue to contend with ahead of the Coppa Italia final against Juventus. On Wednesday, the Napoli manager will be without David Ospina, who is suspended for the the game. Apart from Ospina, the likes of Kostas Manolas, Stanislav Lobotka and Kevin Malcuit also remain on the sidelines.

Gattuso is unlikely to make a barrage of changes, but his hand will be forced when it comes to picking a goalkeeper. With Ospina unavailable, Alex Meret is the obvious choice between the sticks. In front of him, Napoli will line up with the back four of Giovanni Di Lorenzo, Nikola Maksimovic, Kalidou Koulibaly and Mario Rui.

Up ahead in midfield, which will have a three-man shape, Allan is expected to sit at the base, providing cover to the back-line. He will be supported by Piotr Zielinski and Fabian Ruiz, with the latter providing the creative edge to Napoli.

Finally, in attack, there is no looking past Dries Mertens and Lorenzo Insigne, with Jose Callejon expected to start ahead of Matteo Politano on the right wing. Mertens will lead the line for Napoli against Juventus, with Insigne attacking Juventus with his directness. 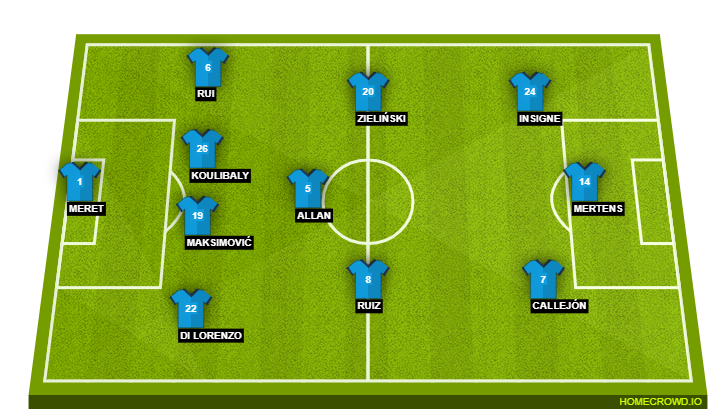 Unlike his counterpart in the Napoli dugout, Maurizio Sarri does not have any fresh injury issues hampering his preparations ahead of the Coppa Italia final. On Wednesday, the Juventus boss will be without just three first-team player in the worst case scenario.

Giorgio Chiellini, Aaron Ramsey and Gonzalo Higuain all missed out against AC Milan, but the trio have been included in the finals list by Sarri. The former Napoli manager, though, is unlikely to hand any of the three a start, with an appearance from the bench possible.

Gianluigi Buffon should start in goal for Juventus, with a back four of Danilo, Matthijs de Ligt, Leonardo Bonucci and Alex Sandro protecting him. This is de Ligt’s chance to impress and keep hold of his place, with Chiellini nearing his return. Sandro and Danilo, meanwhile, will provide width in the final third, with their deliveries being crucial.

In midfield, Miralem Pjanic ought to start as the deep lying playmaker, with Rodrigo Bentancur starting as one of the two box-to-box midfielders. The Uruguayan will be tasked with breaking up the Napoli attack, with the tireless Blaise Matuidi being the third midfielder.

With former Napoli striker Higuain not expected to start, Cristiano Ronaldo will once again lead the line for Juventus, with Paulo Dybala and Douglas Costa providing support to him. Ronaldo’s record against Napoli isn’t the best and he will be keen on improving it on Wednesday. 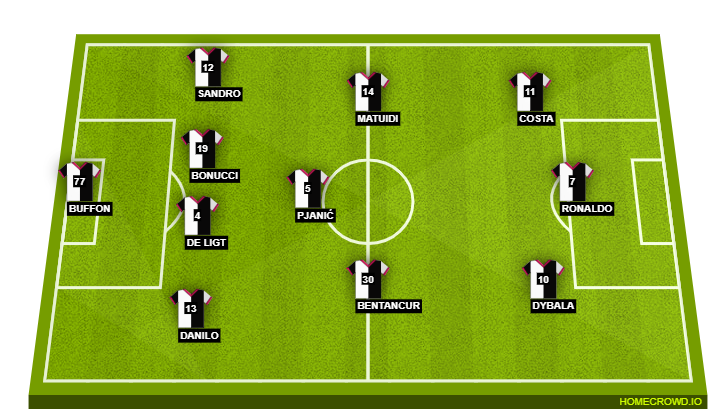 He might not have set the stage on fire all through the season. He might have been embroiled in controversy over the course of the campaign. But, it now looks like Dries Mertens is getting back to his best, and at just the right juncture of the ongoing season.

The Belgian forward has finally broken Marek Hamsik’s record and is now the all-time top scorer for Napoli. Mertens will now been eager to extend that record by continuing his good form, hoping to lift the Coppa Italia by the time the full-time whistle is blown.

Judging by the performance of each side last weekend in the semi-finals, it is clear that there is unlikely to have a lot of goalmouth action. Napoli should be right in the contest for large parts and Juventus cannot afford any slip-ups on Wednesday.

Having said that, a motivated Cristiano Ronaldo, who missed a penalty last time out, will be eager to set the record straight and get back to his topmost levels. In the end, it will boil down to slim margins, which might favour Juventus. The Hard Tackle predicts a 2-1 win for Sarri & co.