Real Madrid will be hoping to make a winning return to action when they welcome SD Eibar to the Alfredo Di Stefano Stadium on Sunday.

Matchday 28 of the 2019-20 La Liga season continues on Sunday, with three matches on show on the day. Real Madrid will resume their league campaign in the second game of the day when they play hosts to SD Eibar, not at the Santiago Bernabeu but at their training ground – the Alfredo Di Stefano Stadium.

Real Madrid have been back in the thick of things in the title race, enjoying a slow, albeit productive renaissance in Zinedine Zidane’s second coming as their manager. Los Blancos are second on the La Liga table, just two points behind Barcelona. However, they need to hit the ground running if they are to win the title, having won just one of their last four before the near three-month break.

Eibar, on the other hand, are embroiled in the relegation battle, having won just seven of their 27 games so far. After losing more than half of their outings, Los Armeros are 16th on the table, just 2 points outside the drop zone. With 18th-placed Mallorca facing Barcelona on Saturday, Jose Luis Mendilibar’s men have the chance to open up a bigger gap, though their task is rather daunting.

The reverse fixture, played at the Ipurua back in November last year, ended in a convincing 4-0 win for Real Madrid, with Karim Benzema, Sergio Ramos and Federico Valverde on target for the Merengues. Ahead of the latest meeting between the two sides, The Hard Tackle takes a closer look at the encounter.

Zinedine Zidane does not have many injury concerns hampering his preparations ahead of the visit of Eibar. On Sunday, the Real Madrid manager will be without just three first-team players, with Nacho, Lucas Vazquez and Luka Jovic the only ones on the sidelines.

Zidane, though, has greeted some good news on the fitness front, with Eden Hazard and Marco Asensio both 100 percent fit and ready to return. Hazard should slot straight back into the starting lineup, taking his place on the left flank.

Karim Benzema should lead the line for Real Madrid, with Isco completing the front trio. The Spanish international, however, will often drop deep to link midfield with attack, with Hazard and Benzema taking up more central positions while also interchanging their starting positions every now and then.

In the three-man midfield unit, Toni Kroos and Casemiro pick themselves. As for the third spot, the internal duel between Federico Valverde and Luka Modric continues, with the former likely to get the nod over the veteran Croatian midfielder.

When it comes to defence, there is no looking past Raphael Varane and captain Sergio Ramos in the central defensive partnership. Dani Carvajal is an automatic pick on the right side of the Real Madrid defence, with Ferland Mendy likely to pip Marcelo to the left-back slot. In goal, Thibaut Courtois is the obvious choice, as the Belgian continues his tilt for the Zamora Trophy.

Jose Luis Mendilibar has just one fitness issue to contend with ahead of the trip to the Spanish capital, with Ivan Ramis out injured. But, the Eibar boss will be without two other players against Real Madrid, with Paulo Oliveira and Gonzalo Escalante both suspended.

In the absence of Ramis, Anaitz Arbilla is expected to partner Pedro Bigas at the heart of the Eibar defence. The central defenders will be flanked by Roberto Correa and Cote on either side, with Marko Dmitrovic taking his place between the sticks against Real Madrid.

Up ahead in midfield, the onus will be on Pape Diop to hold the fort in front of the back-line and curb the influence of Toni Kroos and Isco. Diop will have Sebastian Cristoforo for company in the middle of the park, with the 26-year-old tasked with transitioning from defence to attack quickly.

Pedro Leon and Fabian Orellana will be the two wide men for Eibar, with the duo looking to keep a track on the two Real Madrid full-backs. Finally, Sergi Enrich and Charles will form the strike partnership for the visitors. 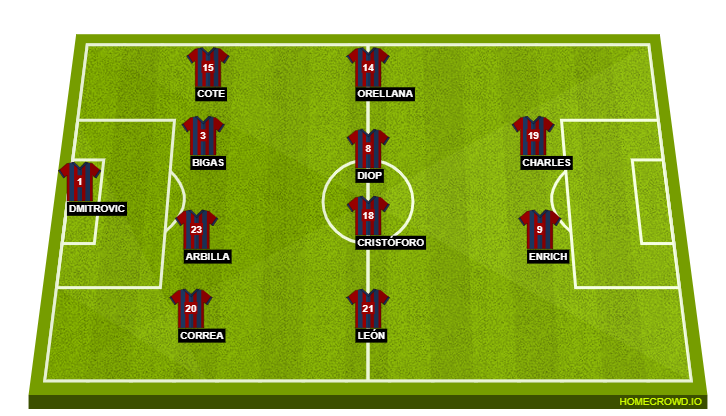 For one reason or another, it has been a maiden campaign to forget for Eden Hazard. After completing his dream move to Real Madrid, not many would have predicted things to go so horribly wrong for him, although it is largely through little fault of his own.

Now with his injury horrors behind him, Hazard can finally kick-start his Real Madrid career. With Los Blancos being in urgent need of goals from players other than Karim Benzema, this truly is the perfect time for Hazard to rise to the occasion and help deliver the La Liga title in the run-in. A crucial period beckons the Belgian.

Real Madrid have a tricky run-in and cannot afford any slip-ups, especially with Barcelona looking in decent touch upon the resumption of La Liga. Their first fixture offers Los Blancos the chance to get back into groove before the more difficult games come one after the other.

Playing in the Alfredo Di Stefano Stadium offers them a distinct advantage and the best defence in La Liga should have a good time extending their record. The Hard Tackle predicts a comfortable return to action for Zinedine Zidane & co. Eden Hazard and Karim Benzema should be among the scorers, with Real Madrid winning 3-0.