Borussia Dortmund will be eager to keep a firm grip on second spot on the Bundesliga table when they take on Hertha Berlin on Saturday.

Matchday 30 of the 2019-20 Bundesliga season kicks off this weekend, with each of the top five teams in action before the end of Saturday. Borussia Dortmund will be the last of these teams to take the field, when they play hosts to Hertha Berlin at the Signal Iduna Park, hoping to remain second, with RB Leipzig playing rock-bottom SC Paderborn earlier in the day.

Borussia Dortmund have largely been solid since the return of Bundesliga last month, although the defeat to Bayern Munich has practically ended their title hopes. Now 7 points behind the leaders, all Lucien Favre & co. can hope for is a huge slip-up from the champions while winning every game they play, which they ensured last week with a 6-1 mauling of SC Paderborn.

Hertha Berlin, meanwhile, have been stunning under Bruno Labbadia. Upon the resumption of the season. Die Alte Dame have not lost any of their four ties, winning three of them quite convincingly (D1). In fact, in this period, only Bayern Munich have more points than Hertha, with the capital side up to ninth on the Bundesliga table and in with a chance to qualify for the Europa League.

The reverse fixture, played at the Olympiastadion in November last year, ended in a 2-1 win for Dortmund, with Jadon Sancho and Thorgan Hazard on target for the visitors, while Vladimir Darida netted the consolation goal for Hertha. Ahead of the latest meeting between the two sides, The Hard Tackle takes a closer look at the encounter.

Mats Hummels is suspended for the clash against Hertha Berlin. (Photo by ODD ANDERSEN/AFP via Getty Images)

Lucien Favre has received a mixed bag of squad updates ahead of the visit of Hertha Berlin. On Saturday, the Borussia Dortmund manager will be without five first-team players due to fitness issues and suspension.

Mats Hummels is suspended for the game after being shown his fifth yellow card of the season in the Bundesliga last weekend. Apart from Hummels, Favre will also be bereft of the services of Nico Schulz (muscular), Dan-Axel Zagadou (knee) and captain Marco Reus (thigh).

Mahmoud Dahoud will not play again this term due to a long-term knee injury. Meanwhile, Reus has resumed individual training, as confirmed by Favre during his pre-match press conference. The Borussia Dortmund captain might just be available towards the business end of the season after earlier concerns that he was done for the season.

The good news, however, is that Erling Haaland has resumed training after recovering from a minor knee injury, sustained against Bayern Munich last week. However, judging by the way Favre prefers to deal with players returning from injuries, it is likely that Haaland will not start for Dortmund and will instead be an option on the bench.

In the Norwegian prodigy’s absence from the starting lineup, Thorgan Hazard ought to be deployed centrally once again by the former Hertha Berlin boss. Hazard will reprise the false nine role, with Julian Brandt and Jadon Sancho, the hat-trick hero last time out at SC Paderborn, flanking him on either side.

With Dahoud unavailable and Hummels suspended, the defenders and central midfielders pretty much pick themselves. Hummels’s unavailability means Emre Can will have to drop into defence, starting in the middle of the back-three, with stand-in captain Lukasz Piszczek and Manuel Akanji for company.

With Can dropping into the three-man central defensive unit, Axel Witsel will partner Thomas Delaney in the midfield double pivot. Achraf Hakimi and Raphael Guerreiro will once again be the wing-backs, with Roman Burki, who has been linked with a move to Chelsea, taking his place in the Dortmund goal. 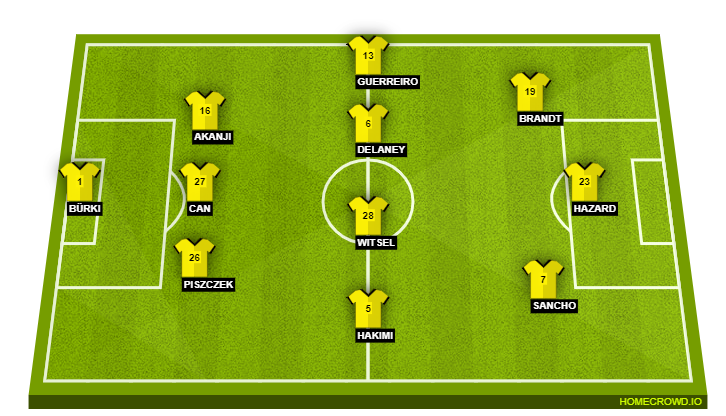 Bruno Labbadia does not have any fresh injury concerns hampering his preparations ahead of his side’s latest fixture. Against Borussia Dortmund on Saturday, the Hertha Berlin gaffer is likely to be without five first-team players, with none of the sidelined players expected to return.

In fact, Labbadia has greeted some good update on the team news front, with both Niklas Stark and Karim Rekik rejoining training this week. Thomas Kraft, Per Skjelbred and Marius Wolf, on loan from Borussia Dortmund, trained on their own this week and might not start for Hertha.

Marvin Plattenhardt and Matheus Cunha, though, still remain unavailable due to their respective concussions and will not take part in the game against Dortmund. The only other absentee for the visitors is Santiago Ascacibar (foot). Meanwhile, Salomon Kalou is suspended by Hertha after his infamous stunt while breaking the coronavirus curfew.

Salomon Kalou will not feature against Borussia Dortmund. (Photo by Martin Rose/Bongarts/Getty Images)

Labbadia has employed a 4-2-3-1 formation in each of his four games as the Hertha Berlin manager thus far and should keep faith in the system once again. The focus will be on quick transitions when on the ball while pressing intensely once the visitors lose possession.

Rune Jarstein picks himself between the sticks for Die Alte Dame and the 35-year-old Norwegian will be protected by a back four of Peter Pekarik, Dedryck Boyata, Jordan Torunarigha and Maximilian Mittelstadt. Full-backs, Pekarik and Mittelstadt will hold the key for Hertha against Dortmund, with the duo taking on a lot of creative onus with their crosses.

With Skjelbred training individually this week, it is likely that Arne Maier could come into the starting lineup, partnering Marko Grujic in the midfield double pivot. Maier will sit deep, almost dropping into the backline, allowing the full-backs to bombard forward, when Hertha have the ball.

Grujic, on the other hand, will be in-charge of transitions, linking up with Vladimir Darida, who will be given the freedom to roam high up the pitch. Darida will have Javairo Dilrosun and Dodi Lukebakio on either side of him, with the wingers looking to create overloads by veering inwards as Pekarik and Mittelstadt charge forward.

Vedad Ibisevic, who will don the armband for Hertha, will lead the line against Dortmund, with Krzysztof Piatek being an option on the bench for Labbadia to consider later on in the game. 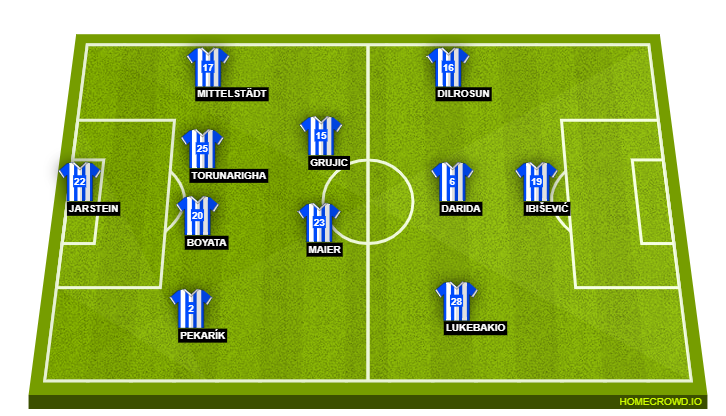 With Erling Haaland unlikely to start a second successive game, it will be up to Jadon Sancho to provide the goalscoring threat in the final third once again. The hat-trick hero against Paderborn last weekend, Sancho has been breaking records this term.

Now up to 20 goals and as many assists in all competitions this term, the English international continues to add new elements to his game. He will once again need to be at his very best if Borussia Dortmund are to get past an in-form Hertha Berlin side, although Sancho will count on support from the likes of Thorgan Hazard, Julian Brandt, Achraf Hakimi and Raphael Guerreiro.

This is a game that is likely to go right down the wire. No wonder it is the topspiel for Matchday 30 of the 2019/20 Bundesliga season. Hertha Berlin are one of the form sides in the top-flight and have been galvanized by the appointment of Bruno Labbadia. With European qualification a possibility now, we can expect the visitors to be in the game right till the very end.

However, Borussia Dortmund have a huge advantage in that Lucien Favre will have Erling Haaland to call from the bench in the latter stages of the game, making them a tough prospect. With Jadon Sancho looking quite purposeful, and the support act in good touch as well, BVB should have just about enough to get over the line with all three points.

The Hard Tackle predicts a keenly contested affair, with Dortmund prevailing 2-1, hoping to close the gap to Bayern Munich in case they fail to beat Bayer Leverkusen earlier in the day.