Arsenal begin their third Europa League campaign in a row on Thursday with a trip to Germany, where they face Eintracht Frankfurt.

Eintracht Frankfurt will be aiming to do one better than their semi-final appearance last season, when they lost to eventual champions Chelsea. The German side face Arsenal in what looks like a promising clash. The Eagles will use their run in the competition as an inspiration to provide some tough competition to the visiting side and get their season going on a positive note.

More importantly, Frankfurt will be looking to escape their bad start to the Bundesliga season, where they languish in 9th place and show some of their inner grit against Arsenal. The biggest problem for Frankfurt has been their loss of attacking talents over the summer after Luka Jovic and Sebastien Haller departed for greener pastures. But, having already played in 6 Europa League qualifiers, they should have the rhythm.

Arsenal, on the other hand, come into this game with a point to prove after their dismal performance against Watford in the Premier League. The Gunners squandered a two-goal lead for the game to finish in a 2-2 draw. Unai Emery’s side are winless in their last three games and are desperate for a win, especially in the opening game of this season’s Europa League.

But, Arsenal will still be bitter in the way their last campaign panned out, after losing the final in Baku to London rivals Chelsea. That loss cost them a place in this season’s Champions League. This season’s Europa League campaign, like last term’s, is going to be an important one for Emery and his Arsenal side to succeed in their quest to qualify for the Champions League.

After a summer that saw the side part ways with three of their prominent forward stars, Frankfurt might be lacking in the attacking unit. However, those sales have given Filip Kostic a chance to shine, meaning he is a certain starter, while new signing Andre Silva is also likely to start in attack.

Frankfurt will be without Marco Russ, who is out with an injury. Adi Hutter is expected to go into the game against with a three-man backline. David Abraham, Makoto Hasebe and Martin Hinteregger are likely to be the starting central defenders.

Arsenal are expected to go with a 4-2-3-1 formation against Eintracht Frankfurt. Emery might have been boosted by the return to full training of full-backs Hector Bellerin and Kieran Tierney, but the duo are still short of match fitness. As a result, Ainsley Maitland-Niles and Sead Kolasinac could continue as the full-back pairing for Arsenal.

In midfield, Emery could use the Group Stage to experiment with many options at his disposal. Matteo Guendouzi could be rested for this encounter, while either of Granit Xhaka or Lucas Torreira could start alongside Willock in the double pivot.

Emery is expected to continue playing Nicolas Pepe in the side, as the winger is still yet to find feet and form. Dani Ceballos is likely to feature in the hole, with Mesut Ozil rested, while Reiss Nelson will take up his place on the left flank. Pierre-Emerick Aubameyang should lead the line for Arsenal once again and hope to continue on his recent good form in front of goal. 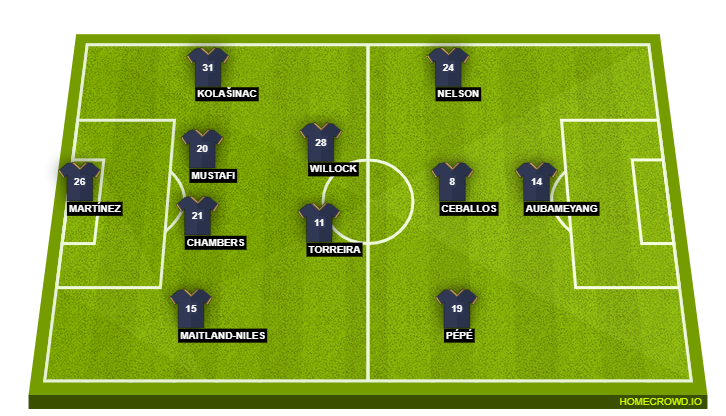 Time to come out of the blocks? (Photo by Catherine Ivill/Getty Images)

The club record signing has surely shown flashes of what he is capable of from an attacking point of view, but without any end product so far. Nicolas Pepe has started in the last three games for Arsenal, but has shown a bit of inconsistency in his finishing, although his ability as a winger cannot be questioned.

The game against Frankfurt could be a good opportunity for Pepe to take fresh approach on the pitch and start performing at a level expected of him. Additionally, this game will be without the massive pressure that Premier League games bring with them, and it could be a chance for Pepe to gel with his fellow Arsenal attackers with much more ease.

The prediction from Arsenal’s point of view might come across as pessimistic, But, recent displays from the Gunners suggest the lack of protection at the back is becoming a problem. Frankfurt might have lost three of their top attackers during the summer, but they still have more than enough to hurt the current Arsenal defensive unit.

Arsenal, meanwhile, have the means to win, if they put in a consistent display. But, the fact that it could be a much changed side from the one that started the last Premier League game suggests there could be a lack of cohesion in the team. This could prove to be a vital aspect for Eintracht Frankfurt to exploit, and as our prediction goes, it could be a 2-2 draw.