The penultimate day of the group stage at the 2018 FIFA World Cup will see teams from Groups E and F play their final games of the first round. At the Ekaterinburg Arena, Mexico will be looking to book their place in the Round of 16 for good, when they face off against Sweden, who could need all three points to qualify.

Mexico have been one of the standouts at the 2018 FIFA World Cup, while also being a sort of a giant killer since their win over Germany in their opening game. El Tri followed up the stirring victory with a close 2-1 win over Mexico last week, and now need just one point to confirm top spot in Group F.

Sweden, on the other hand, almost piled the misery further on Germany before surrendering their one-goal lead to lose their first game of the tournament. A late Toni Kroos free-kick saw Germany remain alive in the tournament, leaving them level on points with the Blagult, who now need to do better than the defending champions to progress after their final group stage game.

The two sides have previously faced each other nine times, with Mexico dominating the head-to-head record 4-2. Ahead of their latest meeting on Wednesday, The Hard Tackle takes a closer look at the Group F encounter.

Juan Carlos Osorio made a surprise change last time out against Sweden as he chose to bench Hugo Ayala, with Edson Alvarez coming into the side. The young defender started as the right-back, with Carlos Salcedo taking Ayala’s place at the heart of the Mexico defence.

With Osorio having a notorious reputation of not keeping his side fixed in successive games, it is likely that Ayala could return to the starting lineup, with Salcedo dropping down to the bench. The rest of the side though, should remain as it is, with Mexico still not guaranteed a place in the Round of 16.

Yet again, the onus will be on the likes of Hirving Lozano, Carlos Vela and Miguel Layun to make the difference in the final third, with Javier Hernandez lining up as the spearhead of the attack. In midfield, the seasoned duo Hector Herrera and Andres Guardado will be in charge of keeping things tight.

Additionally, Herrera and Guardado will also look to recycle the ball quickly and move it forwards to the final third. Guillermo Ochoa had a quiet game against South Korea, but will perhaps be busier when Mexico meet Sweden, meaning he will have to produce a similar performance as he did in the Germany game.

Like Osorio, Janne Andersson made just one change last time out against Germany, but it was to restore a first-choice player back into the starting lineup. Victor Lindelof had missed the win over South Korea due to illness, but was back into the side in place of Pontus Jansson upon recovering.

His men were admirable despite losing, with the pairing of Andreas Granqvist and Lindelof hard to get past. Mikael Lustig and Ludwig Augustinsson were sound defensively, but will need to put in a shift in the final third to provide a greater threat to Mexico.

The role of Sebastian Larsson will be key as well, with the Hull City midfielder in charge of the set-pieces. His pinpoint delivery should pose a lot of problems to the Mexican defence, while Emil Forsberg will look to create the bulk of chances from open play.

The strike partnership of Marcus Berg and Ola Toivonen have got just one goal between them, and the duo will need to pull their weight in order to get Sweden past the group stage and into the next round.

Meanwhile, Jimmy Durmaz will be keen to prove a point after conceding the free-kick that led to Germany’s winner before copping a lot of flak back home. The likes of Viktor Claesson, Larsson and Albin Ekdal will also need to be careful as their next booking will result in a one-match ban. 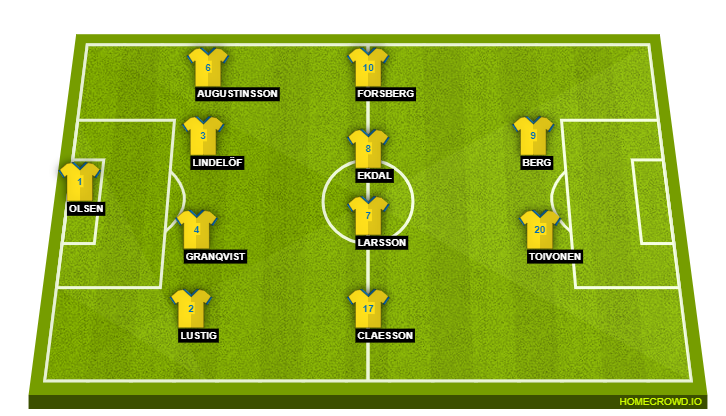 Andreas Granqvist will have to rally his troops on Wednesday. (Photo courtesy – Maddie Meyer/Getty Images)

The anti-climactic end to their game against Germany is set to put a lot of pressure on Sweden ahead of their final group game against Mexico. With the aim to better Germany’s result at the very least, they just cannot afford a slip-up, meaning they will have to be sound defensively.

Andreas Granqvist will thus, have to shoulder a lot of the responsibility in order to keep the backline disciplined and organised to concede as little chances as possible. His partnership with Victor Lindelof was one of the positives for Sweden last time out, and the duo will look to shine once again.

Till deep into stoppage time against Germany, things seemed to be going well for Sweden despite the fact that the match was about to end all square. But, the 2-1 loss has complicated matters as they now need to better Germany’s result to have a chance of making the Round of 16.

Mexico, on the other hand, have some pressure on them as well despite winning both of their games thus far. But, the fact that Sweden will be looking for goals should make matters easier for them in the final third. We predict a close game, with Mexico just edging out Janne Andersson’s men, for whom it could end with heartbreak.