The Group H fixtures of the 2018 FIFA World Cup gets underway on Tuesday as Colombia face off against Japan at the Mordovia Arena.

Day Six of the 2018 FIFA World Cup will kickstart the Group H matches with all four teams playing on the same day. Colombia and Japan will kick-off their respective campaigns when they face off against each other at the Mordovia Arena on Tuesday afternoon.

A star studded Colombia should fancy their chances of going further than the 2014 World Cup, when they were knocked by out the hosts Brazil in the quarter-finals. Los Cafeteros also endured a difficult qualifying campaign with a draw in the final match against Peru securing their qualification to the coveted tournament. Thus, the South American giants do have some ground to make up as they look to eclipse their success in Brazil four years ago.

Unlike Colombia, Japan had a relatively better qualifying campaign, having won seven back-to-back games without conceding a goal following a less than convincing goalless draw against Singapore in their very first qualifying match.

Although the draw could have been worse for the Blue Samurais, they come into the tournament as the lowest ranked team in the group nonetheless, meaning they will likely have to cause an upset or two if they are to go through to the knockout rounds.

Colombia haven’t had many chances to warm up in the build-up to this tournament, having played only one friendly match against Egypt. They drew goalless against the Pharaohs, meaning it’s almost imperative that they start their campaign on a winning note.

Jose Pekerman will rely on his experienced set of players as he attempts to oust Japan in their first group game. A majority of those players were included in the 2014 roster, meaning their experience of playing at the grandest stage might help them overcome the Asian giants on Tuesday.

Japan, on the other hand, could be in even more distress in the run up to their opening game. Having been appointed just 70 days before the start of the World Cup, new manager Akira Nishino had only three friendlies to drill his side and the results haven’t been all that convincing either. They were goalless in their defeats to Ghana and Switzerland back in May while Takashi Inui’s brace helped them register a 4-2 victory over Paraguay earlier this month.

Jose Pekerman has found astounding success in the international level, at least when compared to his failures at the club level. His ability to prevail in the international stage will be quintessential for Colombia as they look to make an impression in this edition of the FIFA World Cup.

Tactically, the 68-year-old has stayed true to his four-man backline with the 4-2-3-1 being his most favoured formation and the likely shape they’ll use against Japan on Tuesday. Santiago Arias is an assured starter on the right side of the defence, with the player being the only recognised option available in that position.

Colombia will likely rely on the young defensive duo of Davinson Sanchez and Yerry Mina in the central defensive position with Johan Mojica being deployed as the left back. Wilmar Barrios and Carlos Sanchez will sit at the base of the 4-2-3-1. However, star man James Rodriguez is doubtful due to the fatigue, although Pekerman will likely include him in the starting eleven.

Rodriguez’s ability to create chances and carve out the opposing defence will hand Los Cafeteros an advantage in the final third. He will be deployed as the central attacking midfielder alongside two wide players in Juan Cuadrado and Mateus Uribe. Juan Quintero is also a possibility in case James is not deemed to be fit enough to start.

Pekerman will have to decide between Luis Muriel, Carlos Bacca and Radamel Falcao in the lone forward position. We expect the AS Monaco star to be given the nod ahead of Bacca and Muriel, largely due to his vast experience and lethal finishing skills.

Tasked with a rescue job, Japan manager Akira Nishino will understandably play conservative football when they meet Colombia this week. The Blue Samurai will mirror Colombia’s 4-2-3-1 formation with Eiji Kawashima starting in goal.

Japan appear to be injury-free ahead of the game, meaning Nishino will have the privilege of having a host of options in every position of the pitch. Their defensive line will comprise of Maya Yoshida and Tomoaki Makino as the centre-backs, with Hiroki Sakai and Yuto Nagatomo being deployed as fullbacks.

Japan have a number of options in the midfield department as well, but head coach Nishino will likely prefer to go with Makoto Hasebe and Hotaru Yamaguchi at the base of the 4-2-3-1.

In attack, veteran striker Shinji Okazaki will lead the attack. He will be supported by the trio of Keisuke Honda, Shinji Kagawa and Takashi Inui in the final third. 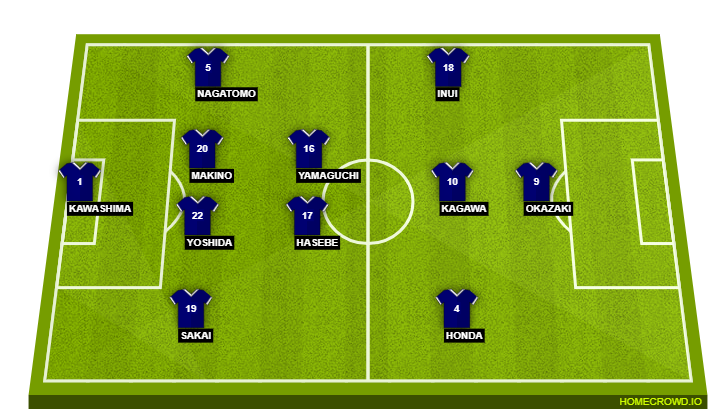 Already one of the most talked about player in the lead up to the tournament, James Rodriguez will once again be tasked with the responsibility of carrying his nation in this World Cup. The 26-year-old was in red-hot form for Bayern Munich last season.

He created the most number of chances whilst being involved in 18 goals in the league last term, ultimately helping the Bavarians seal the title quite convincingly at the end. It remains to be seen whether or not will the highly rated attacker be able to manage to stun the footballing world once again with his antics in this edition of the FIFA World Cup.

While there’s no doubt about the fact that Colombia’s defence will be tested against Japan, who boast the services of some of the most experienced Asian attackers in the game. Having said that, however, their overall flexibility coupled with Japan’s lack of identity under newly appointed head coach Akira Nishima will definitely give them the upper hand in this highly anticipated clash on Monday.