Just three games remain between Barcelona and history as the newly crowned La Liga champions aim to become the first Spanish top-flight side to go unbeaten in a 38-game season. They will be aiming to continue their charge on Wednesday, when the Blaugrana welcome Villarreal to Camp Nou.

There has been very little stopping Barcelona this season, with the champions only dropping points in nine games (all draws), with the other 26 games ending in a win. Ernesto Valverde’s men come into this game on the back of a 2-2 draw that saw them continue this remarkable unbeaten run.

Villarreal on the other hand, have turned their form around of late, and are bidding to usurp Real Betis to fifth place on the La Liga table. The Yellow Submarines have won each of their last three games and are now within two points adrift in sixth, with a game in hand.

The reverse fixture, played back in December at Estadio de la Ceramica, saw Barcelona work hard before grabbing a 2-0 win courtesy goals from Lionel Messi and Luis Suarez. Ahead of their latest meeting on Wednesday, The Hard Tackle takes a closer look at the encounter.

Ernesto Valverde does not have many roster issues to deal with ahead of the visit of Villarreal. On Wednesday, the Barcelona manager will be without just Sergi Roberto, who will serve the first of his two-match ban after being sent off in the stalemate in El Clasico.

The Spaniard’s place at the right side of the defence should be taken up by Nelson Semedo. The rest of the back four is likely to see just one more change, Yerry Mina replacing Samuel Umtiti, who is unavailable due to a knee injury. Gerard Pique and Jordi Alba should retain their places, while Marc-Andre ter Stegen will continue in goal for Barcelona.

The midfield might see one or two changes, with one of them almost certain to be Andres Iniesta. The Barcelona captain looked to be feeling the effects of a knock that he recovered from to make himself available for the Clasico, and might, thus, be rested, with Ousmane Dembele taking his place.

The other change might see Sergio Busquets get a bit of a rest too, possibly starting on the bench, with Paulinho taking his place. Upfront, Lionel Messi and Luis Suarez look in fine touch and should start as the leaders of the Barcelona attack, with Paco Alcacer being an impact substitute once again.

Javier Calleja has a few injury concerns on his hands ahead of the trip to Barcelona. On Wednesday, the Villarreal boss could be without as many as four first-team players due to various problems.

The biggest absentee is captain Bruno Soriano, who has been out with a leg injury since February. The other players sidelined with injuries are Leonardo Suarez and Ramiro Guerra (both knee), with Ruben Semedo unavailable due to personal reasons.

Meanwhile, Mario should continue deputising as the skipper in Bruno Soriano’s absence, with the Spaniard set to start as the right-back. Giving him company at the back should be Victor Ruiz, Alvaro Gonzalez and Antonio Rukavina, with Sergio Asenjo starting between the sticks.

In midfield, Bruno’s absence has been covered well by Rodri and Manu Trigueros, and the duo should start in the middle of the park once again, aiming to keep a check on Coutinho, Messi and Dembele. Samu Castillejo and Denis Cheryshev should man the flanks, with Daniel Raba and the in-form Carlos Bacca staring upfront. 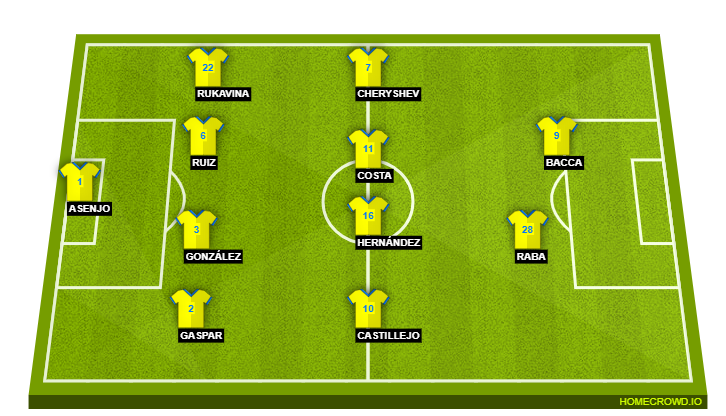 Things just haven’t managed to improve much for Dembele, in what continues to be a testing maiden season at Barcelona. A mini turnaround in fortunes was only a false dawn, and the Frenchman is once again seeing very little game time.

With his Barcelona future reportedly uncertain, Dembele ought to take whatever opportunities coming his way to impress Ernesto Valverde that he deserves to be at Camp Nou next season. The first of these could be against Villarreal, and a strong outing could go along way.

The fixtures are coming thick and fast at the business end of the season, and we might see a tired performance from both sides on the night. There are likely to be goals from both Barcelona and Villarreal, although the hosts should have enough firepower to get all three points.