Tottenham will look to take a big step towards confirming a place in the top four when they visit the Hawthorns to take on West Bromwich Albion on Saturday.

The race for a top four finish is getting spiced up right at its climactic end, with Chelsea making a late charge to qualify for the Champions League. On Saturday, Tottenham can all but seal their place in the sought-after places when they take on West Bromwich Albion at the Hawthorns.

West Brom are making a late charge to make perhaps, the greatest relegation escapes in the history of the Premier League. The Baggies have won eight points from their last four games, and have been a rejuvenated lot under caretaker manager Darren Moore. However, anything other than a win will condemn them to the Championship.

Tottenham, on the other hand, only just returned to winning ways last weekend with a 2-0 win over Watford. Prior to the result, Mauricio Pochettino’s men had drawn one and lost a game each to both Manchester clubs – a sequence of results that put their place in the top four under threat and booted them out of the FA Cup.

The reverse fixture, played at Wembley back in November, saw Tottenham come from behind to hold West Brom to a 1-1 draw, courtesy a Harry Kane goal. Ahead of their latest meeting on Saturday, The Hard Tackle takes a closer look at the encounter.

Darren Moore does not have many pressing injury concerns to deal with ahead of the visit of Tottenham. On Saturday, the West Bromwich Albion boss will be without just three first-team players due to various problems.

Gareth Barry (knee) and James Morrison (achilles) will not play another game this season due to their respective problems. Nacer Chadli is a short-term absentee, as he continues regaining match fitness following his recent injury.

Moore, meanwhile, has been sure of his selection since taking charge, with Craig Dawson moving into a more central position, lining up alongside Ahmed Hegazi at the heart of the West Brom defence. The duo will be key on both ends of the pitch, especially in set-piece situations. Allan Nyom and Kieran Gibbs are likely to be the full-backs once again.

Shoring up the midfield, should be Jake Livermore, with West Brom veteran Chris Brunt starting in a more central role once again. Brunt will also be the man on set-piece duty, putting in pinpoint deliveries to the likes of Dawson, Hegazi and striker Salomon Rondon.

James McClean and Matt Phillips will provide a burst of pace in the wide areas, while in-form Jay Rodriguez will be aiming to stretch the Tottenham defence with his nippy movement, aiming to create pockets of space for Rondon to get into. 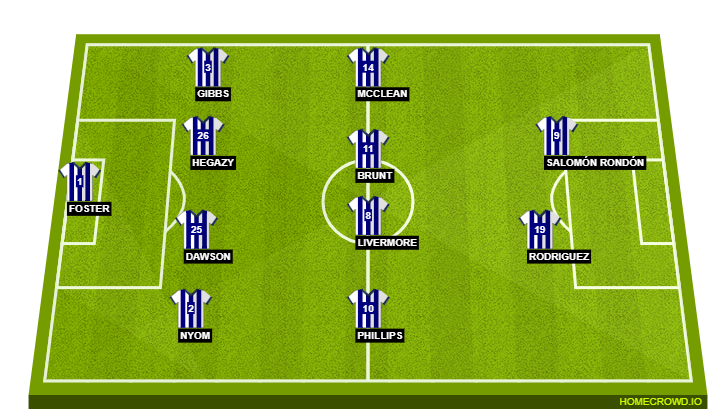 Mauricio Pochettino has just a couple of pressing fitness troubles on his hands before taking his side to the Hawthorns. The Tottenham boss has his midfield choices down to the bare bones, with Harry Winks (ankle) unlikely to play again this season and Mousa Dembele unavailable, at least for the weekend due to his own ankle injury.

In the duo’s absence, Pochettino is likely to name Victor Wanyama in the starting lineup. Eric Dier is likely to be more adventurous in midfield, with the Kenyan himself expected to take aim at goal from long range every now and then.

At the back, the usual suspects should start once again, with Davinson Sanchez starting alongside Jan Vertonghen at the heart of the Tottenham defence. Kieran Trippier and Ben Davies should be the full-backs bombing up and down their respective flanks, looking to set up a large chunk of the chances for Harry Kane.

Behind Kane, Son Heung-min, Christian Eriksen and Dele Alli are likely to be the attacking midfielders, with the trio creating a fluid system that should see them interchange places and get into goalscoring positions in and around the West Brom box regularly. Eriksen, as always, will also pose a threat with his dead-ball abilities.

One of the more consistent performers for Hegazi this season, Hegazi has cut a solid figure at the back, especially under the tutelage of Darren Moore. On Saturday, he will face his biggest test yet, keeping Harry Kane quiet for ninety minutes to possibly ensure another big win for West Brom.

On the other end of the pitch, the Egyptian will pose a big threat during set-piece situations, something Hugo Lloris will have to be wary of. The biggest game of his West Brom career so far, as the Baggies look to avoid the drop.

There has been a sea change in the attitude of the West Brom players ever since Darren Moore took charge, a never-say-die attitude that has already helped take points off Manchester United and Liverpool. Tottenham, on the other hand, look like they can’t wait for the season to end, especially after their FA Cup ouster.

It should be another close game between the two sides on Saturday, with the hosts keeping an organised defensive front. Jay Rodriguez is likely to be a big factor going forward for West Brom, and it won’t be a surprise to see him on the score sheet once again. The Hard Tackle though, predicts a share of the spoils that will see the Baggies drop down to the Championship after a valiant fight.