The UEFA Champions League finalists will be known this week when the four semi-finalists compete in the second leg of their respective ties. In the Italian capital, AS Roma will be hoping for a Barcelona-like comeback when they play hosts to Liverpool at Stadio Olimpico on Wednesday.

Roma warmed up for the second leg with a 4-1 win over Chievo in the Serie A last weekend that saw them keep a firm grip on third spot. As they turn their attention back to the Champions League, they have a three-goal deficit to make up with memories of a similar turnaround against Barcelona still fresh in everyone’s minds.

Liverpool, on the other hand, produced a tame performance as they were held to a goalless draw by Stoke City at Anfield. But, Jurgen Klopp is grappling with a tough situation heading into the second leg, with assistant manager Zeljko Buvac taking a leave of absence for the remainder of the season, and reportedly set to leave the club.

The first leg, played at Anfield last week, saw Liverpool run out 5-2 winners, with Roma shortening the lead with two late goals. Ahead of the second leg meeting on Wednesday, The Hard Tackle takes a closer look at the encounter.

Eusebio Di Francesco has a few injury concerns to deal with ahead of the visit of Liverpool for the second leg. On Wednesday, the AS Roma boss could be without as many as four first-team players due to various injuries.

The likes of Rick Karsdorp, Gregoire Defrel (both knee) and Diego Perotti (ankle) will definitely miss the game. Kevin Strootman (ribs) is on the treatment table as well, and has a race against time to regain fitness for the game.

The latest from the Roma manager suggests that the Dutchman might not be fit enough to start, although he might make the bench. In his absence, Lorenzo Pellegrini is set to be handed a rare start in Europe, with the young Italian set to accompany Daniele De Rossi and Radja Nainggolan in midfield.

De Rossi and Nainggolan will again be key for Roma to stifle the Liverpool midfielders and retain control of the game. But, they will need help in pressing from the front men, which is where Patrik Schick and Stephan El Shaarawy come in, with the duo looking to put pressure on the Liverpool full-backs, while Edin Dzeko will press the centre halves.

At the back, a possible shift in system is expected, with Di Francesco reverting to a four-man backline, which could see Juan Jesus drop out of the side, with Federico Fazio and Kostas Manolas starting at the heart of the Roma defence. Aleksandar Kolarov will need to turn in a better outing on Wednesday, with Mohamed Salah running rampant at Anfield. 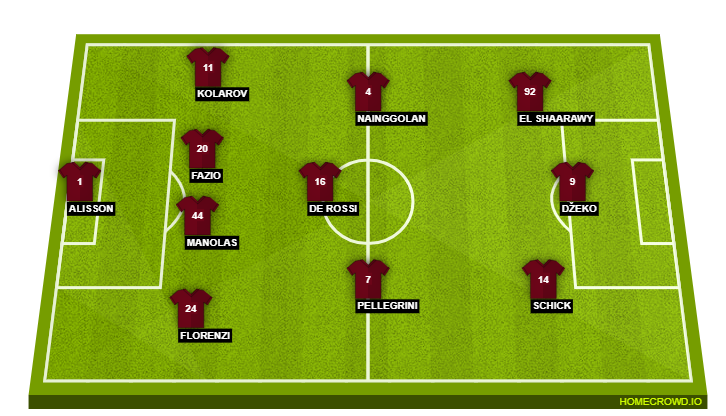 The problems just keep on appearing at the wrong time for Jurgen Klopp. While the Zeljko Buvac issue is enough of a distraction, the Liverpool manager is also up against it as far as injuries are concerned, ahead of the trip to Stadio Olimpico, with as many as four first-team players sidelined.

The latest player on the treatment table is Joe Gomez, who has missed the trip to the Italian capital due to an ankle injury. In his absence, Trent Alexander-Arnold should continue as the right-back, with Andrew Robertson returning to the side after being rested on the weekend.

At the heart of the Liverpool defence, Klopp has just three options at his disposal, with Joel Matip’s season brought to a premature end due to a thigh injury. The Liverpool boss should pick the partnership of Dejan Lovren and Virgil van Dijk once again, although the duo will need to be diligent against the threat of Dzeko.

In midfield, Klopp is down to his bare bones, with both Alex Oxlade-Chamberlain (knee) and Emre Can (back) sidelined due to their respective injuries. As a result, the trio of Georginio Wijnaldum, James Milner and Jordan Henderson should start, with the Liverpool captain braving a knock to feature.

The Barcelona comeback was not too long ago, and it was Edin Dzeko who had set the tone for a popular win then. On Wednesday, the Bosnian will have similar responsibilities once again, with a 3-0 win enough to send Roma through to the Champions League final.

Dzeko will have to constantly keep the pressure on Dejan Lovren and Virgil van Dijk, try and stretch the duo out of position and take his chances against Loris Karius on a night when there’s very little room for error. A repeat of the Barcelona performance could just see lightning strike twice.

Roma kept themselves in the tie with the two late goals in the first leg last week, but will need to get their tactics spot on to make another stirring comeback on Wednesday. Defending with a high line played right into Liverpool’s hands, when they needed to cut off the space for the Reds, something they are likely to do in the second leg.

The fact that they are yet to concede at home in the Champions League this season will only give them more confidence, although Liverpool will pose the biggest threat yet, and should come close. But, The Hard Tackle predicts a Roma win with a clean sheet in tow, only to fall just short on the night.