Barcelona will be aiming to clinch the La Liga title when they travel to the Riazor to take on Deportivo La Coruna on Sunday.

Matchday 34 of La Liga will culminate on Sunday night, when the title race as well as the relegation battle could officially come to an end. Deportivo La Coruna will welcome league leaders Barcelona to the Riazor, on a night when their fate could be sealed, while the visitors will be looking to clinch the title.

Deportivo are languishing in 18th place on the La Liga table, 12 points away from safety, with relegation practically confirmed. Things haven’t improved much since the appointment of Clarence Seedorf in February, with Depor only managing to win two of the 12 games he has taken charge of.

Barcelona, on the other hand, are yet to lose a game all season and are, in fact, on the cusp of the first ever unbeaten league campaign. Before that happens, Ernesto Valverde’s men will almost surely go on to officially reclaim their La Liga title, with just one more point needed to end the title race.

The reverse fixture, played at Camp Nou back in December, saw Barcelona cruise to a 4-0 win courtesy a brace each by Luis Suarez and Paulinho. Ahead of their latest meeting on Sunday, The Hard Tackle takes a closer look at the encounter.

Clarence Seedorf is grappling with a number of injury concerns within his squad ahead of the visit of Barcelona. On Sunday, the Deportivo La Coruna manager could be without as many as five first-team players due to different fitness problems.

Sidnei (hamstring), Eneko Boveda (thigh) and Sulley Muntari (hamstring) will definitely miss the game, while the likes of Bruno Gama (illness) and Zakaria Bakkali (ankle) are major doubts due to their respective injuries.

The aforementioned injury concerns mean that Seedorf is down to his barebones as far as defensive selections are concerned, meaning that, while Fabian Schar and Raul Albentosa will start at the heart of the Deportivo defence, Juanfran and Luisinho should be the full-backs.

In front of the backline, Guilherme will be a key man tasked with keeping the threat of Lionel Messi as minimal as possible. Captain Pedro Mosquera and Celso Borges will also support him while also relaying the ball forward at pace, concentrating the bulk of the forward movements down the middle.

The key men in attack will be Emre Colak, Lucas Perez and Adrian Lopez, looking to exchange positions with fluidity while also aiming to stretch the central defenders to create space for each other. 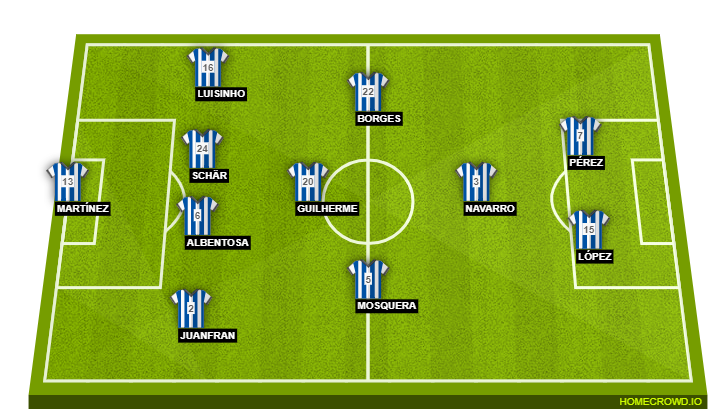 Ernesto Valverde’s men are already in a celebratory mood, having lifted the Copa del Rey last week. The celebrations are likely to continue in league football this week, and the Barcelona boss has just one player missing on the trip to A Coruna, with Sergi Roberto serving a one-match suspension after getting sent off against Celta Vigo.

The Spaniard’s absence can be easily offset by Nelson Semedo, who should start at right-back on Sunday. The rest of the defensive unit pretty much picks itself up, with the likes of Gerard Pique, Samuel Umtiti and Jordi Alba lining up in the back-four, and Marc-Andre ter Stegen starting in goal.

Meanwhile, Andres Iniesta is likely to start each of Barcelona’s last five league games after announcing that he will be leaving the club at the end of the season. Giving him company in midfield, should be Ivan Rakitic, Sergio Busquets and Philippe Coutinho.

The strike partnership picks itself up as well, with Lionel Messi and Luis Suarez starting upfront. While Suarez will look to continue his recent scoring run, Messi will be dropping deep to link up with the midfielders, create chances for the Uruguayan and find scoring opportunities from range for himself.

While celebrations are in order this week at Barcelona, the mood has been dampened to a great extent after Andres Iniesta announced that he will be moving away from the club after 16 senior seasons. The Spain international has been a vital figure for the Blaugrana this season, and will look to bow out on a high.

We could well see Iniesta in his elements on the night, with his trademark link-up with Lionel Messi down the middle likely to delight not just the Barcelona fans, but also the neutrals.

Matchday 34 looks set to be the week when pretty much every race in La Liga could end. At the top, Barcelona can seal it with a draw, which won’t be good enough for Deportivo to save their season in the drop zone.

Judging by their form in the cup final last week, it looks like a Barcelona side smarting from defeat in the Champions League has picked up the pieces and is in menacing mod again. The trend in likely to continue on Sunday, and The Hard Tackle predicts a comfortable 3-0 win for Ernesto Valverde’s men.