Real Madrid and Bayern Munich will be aiming to take a step closer to the UEFA Champions League final when they face off at Allianz Arena on Wednesday.

The UEFA Champions League is well into its latter stages, and the second of the two semi-final first leg ties will be played out at Allianz Arena on Wednesday. Real Madrid and Bayern Munich meet each other in the knockout stage for the second successive year, and the Bavarians will be aiming to exact revenge for last season’s loss.

Bayern Munich have been on a roll under Jupp Heynckes, having already wrapped up the Bundesliga title. Die Roten reached the semi-finals by narrowly beating Sevilla 2-1 in the Last 8, and have warmed up for the Real Madrid tie in emphatic fashion, scoring 14 goals in their last three games.

Real Madrid, on the other hand, have been shaky in recent weeks, with just one win in their last four games. Zinedine Zidane’s men were taken to the very last minute in their quarter-final tie as well as they only beat Juventus 4-3 on aggregate courtesy a late injury time clincher by Cristiano Ronaldo.

The last Champions League meeting between the two sides saw Real Madrid beat Bayern Munich 6-3 on aggregate in last season’s quarter-finals, with Cristiano Ronaldo scoring five of his side’s goals. Ahead of their latest meeting on Wednesday, The Hard Tackle takes a closer look at the encounter.

Jupp Heynckes has a couple of pressing injury concerns to deal with ahead of the visit of Real Madrid. On Wednesday, the Bayern Munich boss will be without three first-team players, with two others major doubts for the first leg.

Arturo Vidal (knee) and Kingsley Coman (ankle) are on the injury table, with the former’s season brought to a premature end after surgery on his injured knee. Manuel Neuer (foot) will miss out as well, with the game coming too soon on his road to recovery.

David Alaba (thigh) and Corentin Tolisso (knock) are doubtful, and will face late fitness tests to determine their availability. While the latter’s absence isn’t a huge concern, Alaba does leave a huge void at left-back, although Rafinha provided fantastic cover in the second leg against Sevilla earlier this month.

Meanwhile, Neuer should continue to be deputised by the impressive Sven Ulreich, who will need to have his guard up against the threat of the domineering Cristiano Ronaldo. In the back-four, Rafinha should be joined by the usual suspects – Joshua Kimmich, Mats Hummels and Jerome Boateng.

Up ahead in midfield, James Rodriguez showed a different side to his game in the aforementioned game against Sevilla while playing in a deeper role. The Colombian could be a part of a midfield trio once again, playing alongside Thiago Alcantara and Javi Martinez, with Robert Lewandowski, Thomas Muller and the ageless wonder Arjen Robben lining up in attack. 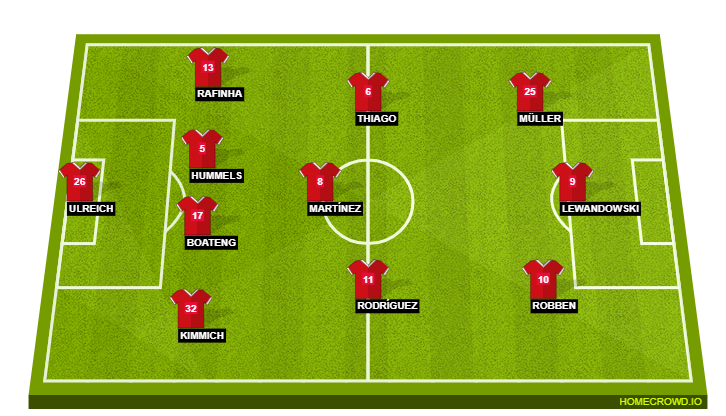 Zinedine Zidane has a near squeaky clean bill of health as he takes his side to Munich for the semi-final first leg. On Wednesday, the Real Madrid boss will have just one player on the sidelines, with Nacho still recovering from a thigh injury.

The biggest news surrounds the return of Sergio Ramos after he served his one-match ban in the second leg against Juventus. The absence of the Real Madrid captain was telling at the Bernabeu, with Zidane’s men having little to no shape at the back, which allowed Juventus to constantly trouble them on the night.

While Ramos’s return won’t solve all the defensive issues, one can expect Real Madrid to have some sort of defensive shape, with Raphael Varane set to line up at the heart of defence alongside his captain. Dani Carvajal and Marcelo should be the other two cogs in the backline.

The midfield trio pretty much selects itself too, with Luka Modric, Toni Kroos and Casemiro making up the numbers. The real bone of contention seems to be in attack, where Isco and Cristiano Ronaldo are likely to start. Their partner though, appears to be uncertain.

Gareth Bale has swiftly gone down in the pecking order after enjoying some success earlier this month. Marco Asensio and Lucas Vazquez have made their respective cases, but Zidane might just stick with Karim Benzema, who combines ever so well with Ronaldo upfront.

His time at Real Madrid, especially under Zinedine Zidane, was anything but happy. But, James Rodriguez has been a player reborn at Allianz Arena, with the return of Jupp Heynckes breathing new life into his career. Ahead of the semi-final first leg, the Colombian has a point to prove to Los Blancos.

Pulling the strings from a deep lying position, James will strike a partnership with Thiago Alcantara and show Zidane and Real Madrid exactly what they let go last summer. Going by his performances in big games over the course of the season, one can expect the Bayern midfielder to make a statement on Wednesday.

What a mouthwatering prospect we have on our hands. It’s the fluidity of the Real Madrid attack against the mind boggling efficiency of the Bayern Munich side. Jupp Heynckes has brought about a sea change in the mindset of the players, who looked to be crumbling under Carlo Ancelotti, and that is exactly what will be key against an ebullient Real Madrid side.

The visitors though, have had an entire week to prepare for the first leg, something that should stand them in good stead, despite Heynckes resting a few key players. But, they should find it extremely difficult to score multiple times against a tight Bayern defence, if at all. A match too difficult to call, which is why we’re going with a 1-1 draw.