Tottenham Hotspur will look to return to winning ways when they visit the Amex Stadium to take on Brighton & Hove Albion on Tuesday.

There’s no time for break as far as Premier League football is concerned as a mini round of fixtures kicks off on Tuesday. The only game on the night will see Tottenham travel to the Amex Stadium to take on Brighton & Hove Albion, aiming to return to winning ways in their pursuit for a second placed finish.

Brighton come into the game on the back of a 3-2 loss to Crystal Palace on Saturday, their fifth successive game without a win in the Premier League. As a result, the Seagulls have dropped down to 13th on the table in recent weeks, although they are likely to be safe from relegation, with 18th placed Southampton eight points adrift.

Tottenham, on the other hand, lost their first league game of 2018 on the same day as newly crowned champions Manchester City ran out 3-1 winners at Wembley. Spurs fell three points behind Liverpool due to the result, with Manchester United a further point ahead of the Reds in second.

The reverse fixture, played at Wembley in December, saw Tottenham cruise to a 2-0 win, with Serge Aurier and Son Heung-Min scoring goals in either half. Ahead of their latest meeting on Tuesday, The Hard Tackle takes a closer look at the encounter.

Chris Hughton does not have many roster issues hampering his preparation for Tuesday. Ahead of Tottenham’s visit, the Brighton boss will be without just three first-team players due to injuries and suspension.

Steven Sidwell is a long-term absentee due to a back injury, with the veteran midfielder yet to make an appearance this season. Izzy Brown is on the treatment table as well, having sustained a knee injury, while Davy Propper will serve the second of his three-match ban.

In the Dutch midfielder’s absence, Beram Kayal is likely to step in once again, lining up alongside Dale Stephens in the Brighton midfield. Anthony Knockaert should return to the side as well, starting on the right flank, with Jose Izquierdo on the opposite side.

Pascal Gross and Glenn Murray will make up the numbers in attack, with the duo the key men in front of goal. At the back, the reliable duo of Shane Duffy and Lewis Dunk will shore up the backline, keeping things tight at the heart of the Brighton defence. 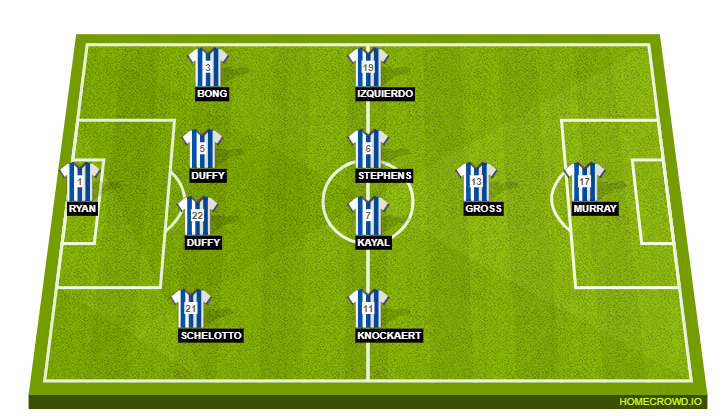 Mauricio Pochettino does not have many pressing injury concerns troubling him either ahead of the trip to the Amex Stadium. On Tuesday, the Tottenham boss will only be without two first-team players, with Danny Rose (calf) and Harry Winks (ankle) on the treatment table.

Despite a near-full strength squad at his disposal though, Pochettino is expected to ring in the changes, keeping one eye on the FA Cup semi-final against Manchester United on Saturday. As a result, the likes of Erik Lamela, Lucas Moura and Moussa Sissoko should all come into the side.

Toby Alderweireld is likely to start as well, with the Tottenham manager confirming in his pre-match press conference that the Belgian defender will be in the matchday squad. The Belgian has not featured in the Premier League since October, while his last appearance in any competition came back in February.

Alderweireld will be looking to prove a point on Tuesday, having lost his place to Davinson Sanchez, who should be his partner at the heart of the Tottenham defence. Serge Aurier and Ben Davies are likely to be the full-backs, with Hugo Lloris starting in goal.

It has been a slow start to life as a Tottenham player for Lucas Moura, with the likes of Christian Eriksen, Son Heung-Min and Dele Alli firmly established in the first-team setup. Having had to bide his time till now, the Brazilian can make a case for himself going forward should he get his first Premier League start on Tuesday.

His pacy outlet will add dynamism to the Spurs attack on the right flank, and could prove to be the perfect antidote for Harry Kane, who will look to make deceptive runs into the Brighton box. Tuesday might just be the night when we see the rise of yet another young superstar at Tottenham.

Brighton have largely been solid at home, with very few sides managing to trouble them this season. Four losses so far are testament to that. But, the Seagulls have been extremely vulnerable at the back of late, and a Tottenham side that is starting to come into its own might give them a hard time on Tuesday.

The hosts aren’t clear of relegation yet, although a win can change it. But, if they have a good go at it on the night, gaps might open up at the back, something that the likes of Dele Alli and Harry Kane are all too capable of exploiting. The Hard Tackle predicts an easy win for Mauricio Pochettino & co.