Juventus and Real Madrid will look to put one foot in the semi-finals when they face off in the Last 8 first leg at the Allianz Stadium on Tuesday.

The UEFA Champions League returns with the quarter-finals this week, and the first game is a repeat of last year’s blockbuster final. Juventus and Real Madrid meet each other again, this time at the Allianz Stadium as they get set to lock horns in the first leg on Tuesday.

The Bianconeri progressed to the Last 8 stage with a fantastic comeback win over Tottenham, winning the second leg 2-1 at Wembley to clinch the tie. Massimiliano Allegri’s men have been in fine form of late, with the draw at SPAL last month one of only two games they haven’t won in 2018.

Real Madrid, on the other hand, have been a curious case of inexplicably contrasting performers in league and Europe. While Los Blancos continue to stutter here and there in La Liga, Zinedine Zidane’s men showcased their credentials for a Champions League three-peat by convincingly beating PSG in the Round of 16.

The last meeting between the two sides was the 2017 Champions League final, with Real Madrid convincingly winning 4-1 to successfully defend their title. Ahead of the latest meeting in this fabled rivalry, The Hard Tackle takes a closer look at the encounter.

Massimiliano Allegri is sweating over a few minor injuries to key players ahead of the visit of Real Madrid. The likes of Alex Sandro, Mario Mandzukic (both thigh) and Federico Bernardeschi (knee) are all doubtful for Tuesday’s tie, but could be in contention to feature, having trained on Monday.

But, while the trio might be available to play in some capacity, Medhi Benatia and Miralem Pjanic will miss out due to suspension. The latter’s absence, in particular, is a bitter blow for Juventus, and could result in slower build-up from midfield.

Pjanic’s place should be taken up by veteran midfielder Claudio Marchisio, who would look to shore up the midfield alongside Sami Khedira. Blaise Matuidi should make up the numbers in the midfield, providing a more direct outlet in build-up play.

At the back, Andrea Barzagli should take up Benatia’s place, lining up alongside Italy teammate Giorgio Chiellini at the heart of the Juventus defence. Kwadwo Asamoah is likely to be the left-back if Alex Sandro struggles to recover in time, with Mattia De Sciglio starting on the opposite flank.

Up ahead in attack, Mandzukic is expected to start on the bench even if fully fit, with Paulo Dybala and Douglas Costa automatic selections. Gonzalo Higuain will be the Juventus striker, looking to repeat his heroics from the Tottenham game. 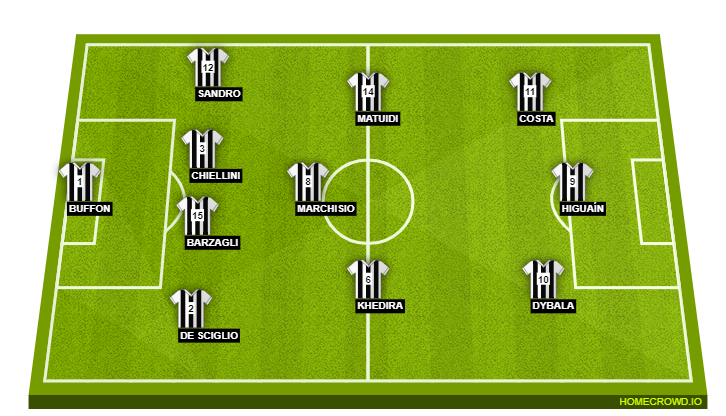 Zinedine Zidane has taken a full strength squad to Turin for the crunch Champions League tie, although two players are doubtful. Achraf Hakimi (knock) and Nacho (thigh) are struggling with minor injuries, and are unlikely to feature on Tuesday.

The Real Madrid boss, meanwhile, should start his first-choice side, meaning the likes of Dani Carvajal, Sergio Ramos and Marcelo should return in the backline. In midfield, Toni Kroos is back in the squad as well, and should start in the middle of the park alongside Luka Modric and Casemiro.

The major bone of contention comes in attack, where Cristiano Ronaldo and Karim Benzema are near-automatic selections. The choice for the third player in attack is likely to be between Isco and Gareth Bale, with the latter likely to be favoured following his performance against Las Palmas last weekend.

With the Welshman starting, Los Blancos are likely to pose a more direct threat from the wide areas, with Bale and Ronaldo drifting inwards and the full-backs providing the width. Benzema will be a key figure upfront with his link-up play abilities.

Another injury stricken campaign has put Bale on the edge at Real Madrid. He now faces two uncertain months at the Bernabeu, making the clash against Juventus one of the most important outings in the Welshman’s Los Blancos career.

Bale should feature in some capacity at the Allianz Stadium, a strong showing on Tuesday should see him rise up the pecking order once again. Otherwise, a move away from Real Madrid beckons for him in the summer.

Tuesday’s match pits two sides that that met in the 2017 final. While Real Madrid will look to take a step closer towards defending their title once again, Juventus will be eyeing redemption following a comprehensive loss last year.

To do that, the hosts will need to showcase the defensive solidity that has often been missing in Europe this season. Real Madrid, on the other hand, will look to play their natural game and back their strengths in attack. The two sides are on a level playing field here, and it should be hard to separate them on Tuesday – we predict a 1-1 draw.