Denmark will look to continue their World Cup preparations when they host Chile at the Nordjyske Arena on Tuesday.

The international break will wind down this week before club football returns to action once again. But, not before a few more interesting games, this time at the Nordjyske Arena in Aalborg as Denmark get set to welcome Chile for their final game in the latest international break.

The hosts are unbeaten in eight games, with their last defeat coming almost two years ago to Montenegro. Chile, on the other hand, are going through a terrible run of form, having lost five of their last eight games – a sequence of results that also saw them miss out on World Cup qualification.

The two times have previously met just once, with Chile running out 2-1 winners in August, 2009, Alexis Sanchez scoring the winner for La Roja. Ahead of their latest meeting, The Hard Tackle takes a closer look at the encounter.

The Danish squad came through unscathed from their narrow win over Panama last weekend. But, Age Hareide should make some rotations as he continues to identify his best side heading into the World Cup.

There shouldn’t be any changes at the heart of the defence though, where Zanka and Simon Kjaer have struck a fine partnership. Jens Stryger Larsen could move to right-back, with Riza Durmisi starting on the opposite flank.

Kjaer will look to keep the backline disciplined and organised and not get sucked out of position through Eduardo Vargas’ movement and hold up play. In midfield, vice captain William Kvist will be the anchor man in front of the defensive line, with Thomas Delaney alongside him.

The key man though, will again be Christian Eriksen, the creative powerhouse for Denmark, pulling the strings in the hole. Pione Sisto, meanwhile, will be the X-Factor for this side with his burst of pace while Viktor Fischer could be preferred over Youssef Poulsen for a more creative output.

Upfront, Andreas Cornelius could get the chance to impress the Denmark boss, with Nicolai Jorgensen already making a case to be the first-choice striker. Veteran striker Nicklas Bendtner should again be an impact sub, much like the Panama game.

There have been several casualties for the Chile squad that failed to qualify for the World Cup. New manager Reinaldo Rueda has axed 14 of the players that were in the matchday squad in the 3-0 loss to Brazil, although much of the core still remains intact.

The biggest absentee is Claudio Bravo, who opted out of the squad after disputes over his goalkeeping coach. In his stead, Johnny Herrera should continue between the sticks once again. The experienced duo of Jean Beausejour and Mauricio Isla remain the preferred full-back pairing, and will provide the width on the flanks.

At the heart of the Chile defence though, changes have been made and the inexperienced duo of Paulo Diaz and Guillermo Maripan should be preferred in Aalborg. Up ahead in midfield, Gary Medel could be deployed as the defensive midfielder to absorb the pressure from Eriksen.

Charles Aranguiz and Arturo Vidal should make up the numbers in the middle, with the latter taking up more advanced positions in the final third and the former pulling the strings in midfield. Two of the front three pick themselves too, with Alexis Sanchez leading the side and Eduardo Vargas the focal point of attack.

Angelo Sagal impressed in a rare start against Sweden although Marcos Bolados made a case for a start after netting the winner on his debut, and could start on the right flank. 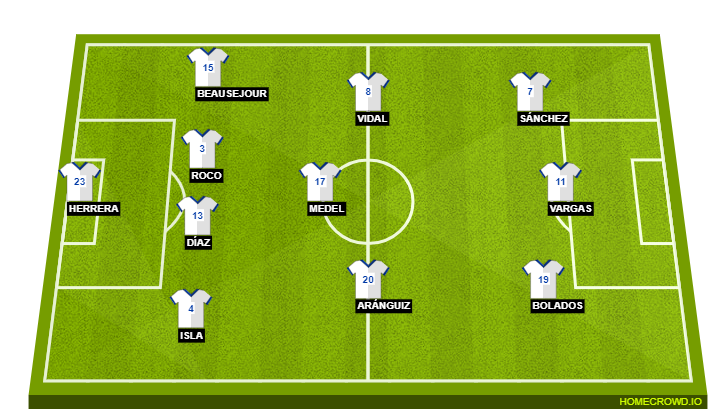 Form has often deserted Vargas at the club level, but he has been one of the best players for Chile in recent years, performing at a consistently high level. As the South American side looks to rebuild a fallen giant, the 28-year-old will be a key player.

Against Denmark, he will look to use his link-up with Alexis Sanchez to good effect, while his ability to stretch the defensive line will also come in handy, bringing the Manchester United superstar into the game in the process.

Tuesday’s match in Aalborg pits two sides that are in different phases heading into the World Cup season. While Chile will watch the tournament from home and have a rebuild job on their hands, Denmark look to be slowly scaling their way back up with Age Hareide forging a strong all-round unit.

The Danes though, have struggled to score freely at home, with Chile in a similar predicament on the road. With that in mind, this is unlikely to be a high scoring affair, especially considering Alexis Sanchez’s struggles. The Hard Tackle, thus, predicts a 1-1 draw for the sides to wrap up the international break.