Manchester City will aim to get back to winning ways when they travel to the Bet365 Stadium to take on Stoke City on Monday.

Gameweek 30 of the Premier League ends with Monday night football at the Bet365 Stadium. Second from bottom Stoke City have a daunting task on their hands when they welcome table toppers Manchester City, knowing that a win can help them escape the dreaded relegation zone.

The Potters are currently 19th on the Premier League table, with just West Bromwich Albion behind them. But, the safety of lower mid-table is just one point away, although their recent form does not provide much optimism, with no win in their last five games.

There has been very little stopping Manchester City, on the other hand, with the Citizens dropping points on just four different occasions. Pep Guardiola’s men come into Sunday’s game on the back of successive league wins over other “Big Six” sides, although they are looking to return to winning ways after losing to FC Basel in the Champions League.

The reverse fixture, played at the Etihad back in October, was a goal glut, as Manchester City thrashed Stoke 7-2, with six different goal scorers for the hosts. Ahead of the latest meeting between the two sides, The Hard Tackle takes a closer look at the encounter.

If performances on the field haven’t caused enough cause for concern, Paul Lambert has a fresh injury in his squad that has sidelined one of his most important players. Mame Biram Diouf is recovering from a shoulder injury he sustained in the goalless draw against Southampton last weekend.

The Senegalese has joined Lee Grant (wrist) and Stephen Ireland (calf), but the striker is the only pressing injury concern. Meanwhile, Saido Berahino and Kevin Wimmer are in contention to make the matchday squad after undergoing programmes to raise their fitness levels.

The key man for the hosts will be captain Ryan Shawcross, who returned to the lineup last weekend after an injury layoff and his imposing presence at the heart of defence. The Englishman should have Bruno Martins Indi for company, with Moritz Bauer and Kostas Stafylidis likely to be the full-backs.

In midfield, Geoff Cameron’s presence has been crucial, with the United States international providing steel in front of the back four. Joe Allen will bring the energetic presence, and will look to add to the numbers in midfield and attack with his work-rate. 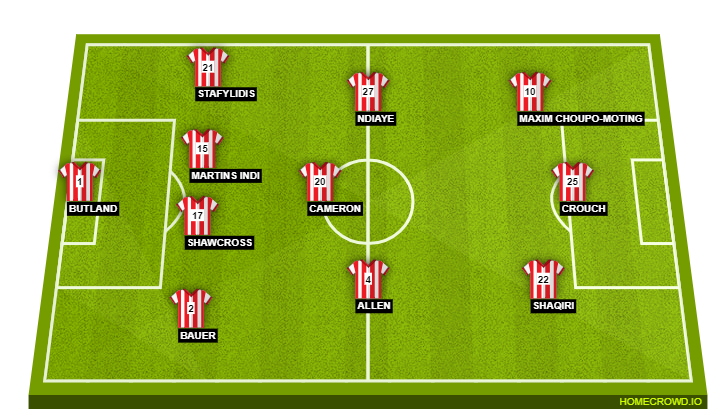 Pep Guardiola boss will travel to the Bet365 Stadium without Sergio Aguero, who announced on Sunday that he has sustained a knee injury in training, and will be unavailable for two weeks.

Fortunately for Guardiola, Gabriel Jesus has recently returned from his own injury layoff and will provide cover in the Argentinean’s absence. Apart from Aguero, Benjamin Mendy is a confirmed absentee, although the Frenchman has returned to training and is set to be available next week.

There are doubts over the availability of Fernandinho, Raheem Sterling and Fabian Delph – available after serving his three-match suspension – with the trio struggling to prove their match fitness ahead of the game.

If Delph continues to be unavailable, Danilo is likely to be deployed as the left-back, with Kyle Walker starting on the opposite flank. Vincent Kompany and Nicolas Otamendi should return to the starting lineup after sitting out the midweek Champions League tie.

In Fernandinho’s absence, the creative trio of Ilkay Gundogan, Kevin De Bruyne and David Silva should start, with Bernardo Silva continuing to make up for Sterling’s absence. The Portuguese forward, and Leroy Sane will provide the spark in attack, with their bursting runs on their respective sides.

Can he spring a surprise? (Photo courtesy – Mark Runnacles/Getty Images)

The only shining light in an otherwise disastrous season for the Potters, Shaqiri looks like the only player who can possibly help Paul Lambert & co. escape relegation. His recent form has been fantastic, and Stoke will hope their Swiss talisman is on song once again to not just avoid a loss but perhaps, even spring a surprise on the league leaders.

Things have been looking quite grim for Stoke City in recent weeks, and the visit of Manchester City is unlikely to improve their fortunes much. With Pep Guardiola & co. not having a game for three weeks after this one, the league leaders can launch quite an onslaught on the Potters.

With very little beyond Xherdan Shaqiri, there aren’t a lot of goals in Stoke, while there has been very little stopping Manchester City’s attack. The Hard Tackle, thus, predicts another comfortable night for Guardiola’s men, who should coast to a 4-1 win on Monday.